We’re live here at Mobile World Congress in Barcelona and ViewSonic had a lot of enticing new devices which we couldn’t wait to get our hands on. In the phones department, which we’ll be focusing on here, are four new handsets which feature dual-SIM capabilities. ViewSonic makes it easy for those to switch between two different lines in varying situations.

Say, for instance, you’re going to Europe and you want to keep your old SIM card in while using a local one. Or perhaps you have a work line and a personal line which you’d like to keep on the same device.

While dual-SIM technology is nothing new in the entire scope of mobile technology, it’s a bit foreign to the Android world and we could always use options like these.

We take a look at the ViewSonic 4e, 4s and ViewPhone 3 in this hands-on. That fourth phone, the ViewSonic 5e (with a massive 5-inch display), was not on hand for us to check out.

Starting with the ViewPhone 3, there’s an 800MHz Qualcomm processor inside to help power Android 2.3 Gingerbread and a custom UI on top (which is undoubtedly SPB’s mobile shell). There’s also a 3.5 inch HVGA display, a 5 megapixel camera, 2GB of internal storage, Bluetooth 2.1 + EDR, WiFi N, 512MB of RAM and ROM, GPS and more.

Next is the viewPhone 4e. Save for its 3 megapixel camera and a 650MHz single-core processor, its specs are quite comparable to the ViewPhone 3.

The ViewPhone 4s is where things really start to get exciting. The 4s brings to market an Android 4.0 device which is powered along by a dual-core Cortex A9 processor. There’s a beautiful 3.5 inch IPS display which has 326ppi. We’ve also got a 5 megapixel camera, a front-facing camera, and 4GB of storage which can be expanded via its microSD card slot.

While the ViewPhone 4s is the only phone out of the three expected to ship with Ice Cream Sandwich, ViewSonic tells us that the 4e and the ViewPhone 3 will both be upgradeable after launch. Be sure to take a look at our hands-on video above!

[Note]: ViewPhone 5e was not available for demo, and the ViewPhone 4s was not running Ice Cream Sandwich, though they assure us that it will by the time it launches. 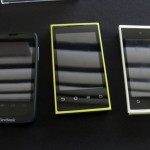 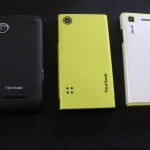 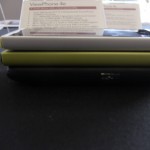 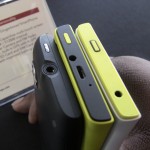