Andy Rubin: Google looking to “double down” on tablets to improve sales 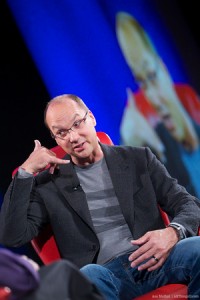 We have been enjoying our Android tablets for over a year. But we represent a very small percentage compared to Apple’s 50 million iPads sold in two years. The general consumer is simply much more interested in the iPad, but Andy Rubin says that Google is not leaving its arms crossed, and is looking to “double down” on the situation, making sure that 2012 changes the tables in favor of the Search Giant.

In comparison, Google has sold only about 12 million tablets. At an interview, in Barcelona, Andy Rubin states that such issue is going to be heavily addressed in 2012. These are Andy’s words:

“There’s no organized way for consumers to recognize it as a viable platform. The educated consumer realizes it now that they’re either picking the Apple ecosystem or the Microsoft ecosystem or the Google ecosystem… we’re going to do a better job at making people understand what ecosystem they’re buying into.”

This means that Rubin believes that educating the masses about Android as a unified platform will further entice customers to purchase Google’s tablets. But the issue is not only ignorance of the platform.

There is a lack of quality tablet-specific apps in the Android Market. Apps are half of the product (if not more), so this is sure to be an important factor. Overall, Rubin states that this has much to do with the fact that Android tablets are selling much less than the competing OS.

Developers concentrate on hitting larger markets, as well as keeping profits higher (spending less). This is why there is such a huge selection of Android phone applications. Android smartphones are currently dominating the market. But Google is gaining momentum in the tablet market, and hopes that it will be more relevant in such.

“We’re now starting to get on the radar, and I’m hoping people decide to put in the muscle and make their apps work great on tablets.”

With a bit of education, Rubin says, developers can do a bit more work to make their Android apps tablet-aware. It is a bit of the chicken and the egg dilemma. Android needs to grow in order to further push developers to improve their apps. At the same time, developers doing their work would substantially push push the Android tablet ecosystem.

We will have to wait and see how Google works on these issues this year. But for now, tell us. Do you prefer iPads over Android tablets? And why?

Technologies Which Will Help You Unblock The