AT&T has just dropped a bombshell on the mobile tech world as they have announced a ton of new devices at their Developers’ Summit here at CES.

To start we have the long-awaited American version of the Samsung Galaxy Note. It’s a 5.3 inch smartphone with a Super AMOLED HD (1280×800) display that is pushing the size boundary but still isn’t considered a tablet. It is LTE-enabled and is compatible with the “S Pen” which allows users to draw and write with Samsung’s unique applications. 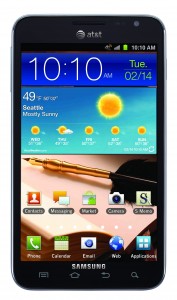 Samsung says that it’s “integrated” which could mean that the software is fully compatible with it or that it is included. We’re hoping they mean both but don’t surprised if it’s just the former. It will have a 1.5GHz dual-core processor, likely of the Qualcomm Snapdragon variety due to its solid compatibility with AT&T’s LTE radios.

It has an 8  megapixel 1080p HD camera, a front facing camera and Android 2.3, though we expect Ice Cream Sandwich to be on its way sometime down the line. AT&T says it will be available “in the coming weeks” so those of you waiting for it shouldn’t have to wait too long.

The Pantech Element is an 8 inch tablet with LTE radios and a waterproof2 rating (meaning a messy trek through rainy trails shouldn’t prove disastrous for your device. It has front and rear cameras and will run Android 3.2 Honeycomb. It’ll be available January 22nd for $300,=.

The SkyRocket HD from Samsung features the same beautiful 4.65 Super AMOLED HD display found on the Galaxy Nexus as well as LTE radios and the same 1.5GHz dual-core processor found inside their Galaxy Note. Details on this one are still a bit cloudy at the moment and Samsung only gives us “in the coming months” as far as a release window. 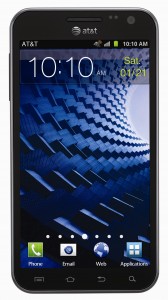 This device, the Samsung Exhilarate, is positioned for the mid-range market and features a 4 inch Super AMOLED display. While no details on its internals were given we don’t expect much more than a single core processor inside, likely of the Samsung Hummingbird variety. 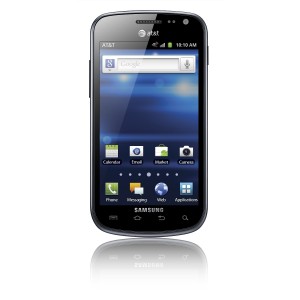 Samsung’s big thing here is that it’s made from 80% recycled post-consumer materials and is about as green as green can get.  Things like an eco-calendar and an eco-calculator (not entirely sure what these are yet) do enough to make us believe that being “green” is t3ruly its niche. Like the SkyRocket, “in the coming months” is all we get for a release window.

This device will be one of their more affordable LTE devices coming in at $50 when it launches on January 22nd, the same day as its big brother Pantech Element. It’ll have a 4 inch Super AMOLED display be we don’t expect it to be a heavyweight when it comes to performance. Titanium  or ruby red are the two colors consumers will be able to choose from once it makes its way to the shelves.

The Xperia Ion from Sony notably drops the “Ericsson” surname as Sony looks to swallow up the phone side of the partnership between the two. It’ll be an LTE enabled device but we’re not sure when exactly you’ll be able to take advantage of those super fast data speeds as we’re only told that it’ll be available in the second quarter.

They have positioned themselves nicely in not only the 4G wars but in the phone wars period. With a myriad of different devices for all markets they’ll be able to offer something for every type of user. We’re going to be trying to get our hands on some of these at CES so stay tuned for any hands-on coverage that we come forth with. Read on for full press details.

From the stage of the AT&T Developer Summit — one day before the 2012 International Consumer Electronics Show in Las Vegas — AT&T Mobility and Consumer Markets President and Chief Executive Officer Ralph de la Vega unveiled five smartphones and one tablet powered by 4G LTE and the Android platform that are planned for availability from AT&T* in early 2012.

De la Vega announced the first 4G LTE smartphone from Sony®1, the Xperia™ ion exclusively from AT&T, with availability planned for second quarter of 2012.
He also introduced the Pantech Burst™, a consumer-oriented device for under $50 that is designed to help make 4G LTE devices more affordable to customers.
For a limited time, customers may buy the Pantech Element and Burst together on contract and get the Element for $249.99 and the Burst at no cost.

The AT&T Developer Summit is a two-day event for software developers to participate in a Hackathon, hear the latest news on AT&T 4G devices and network and get technical news and marketing insights from industry experts. Over 2,000 developers are attending. AT&T remains focused on opening up its network to developers and creating opportunities for collaboration. The two-day AT&T Developer Summit underscores this commitment.

At the Developer Summit, AT&T also provided an update on its 4G LTE network build and outlined the benefits of its blended network technologies approach, which offers customers with compatible devices consistently fast 4G speeds in and out of 4G LTE areas.
All news release and related multimedia content are available in the AT&T online newsroom: att.com/aboutus. Customers can learn more about the devices previewed today at att.com/ces.

Samsung Galaxy Note™. A task master’s dream, the Galaxy Note combines the best features of a smartphone with the larger viewing screen of a tablet and the convenience of a notepad — delivering all-in-one functionality to help users work more efficiently and maintain productivity while on-the-go. Featuring the largest screen on a smartphone, the Galaxy Note boasts the world’s first 5.3-inch HD Super AMOLED™ screen (1280×800) for sharp, clear colors and readability – both indoors and out. Galaxy Note also features the S Pen™, the most advanced pen input technology, featuring an array of leading qualities including pressure sensitivity, preciseness, speed and more. With the S Pen, users can easily sketch drawings, jot down notes, or write emails and texts quickly and easily in free-form handwriting. An easy screen-capture function also allows users to instantly save any screen, and these screens can also be personalized with the S Pen before being saved or shared.

The Samsung Galaxy Note is planned for availability in AT&T stores and online in the coming weeks.

Samsung Exhilarate™.Also planned for availability in the coming months, the Samsung Exhilarate is constructed from 80 percent recycled post-consumer materials and features eco modes and tools such as an Eco calendar and calculator. The Exhilarate also boasts a four-inch touchscreen Super AMOLED display, front and rear facing cameras, voice recognition and access to AT&T U-verse® Live TV. In addition, the Samsung Exhilarate was certified as Platinum by UL Environment – their highest level of sustainability certification. This is AT&T’s second device to receive this certification.

Pantech Element™.This affordable tablet will be available exclusively in AT&T company-owned stores and online for $299.99 with a two-year contract, with planned availability on January 22. The Element is Pantech’s first LTE-connected Android tablet, and is waterproof2, greatly improving portability and usability (see the Pantech website for full details). The Element runs on Android 3.2 (Honeycomb) and includes a crisp 8-inch display, front and rear-facing cameras, and a rich web experience with full HTML and PC-like tabbed browsing.

Pantech Burst™. Also planned for availability on January 22 in AT&T company-owned stores and online, the value-oriented Burst will be the first 4G LTE smartphone from Pantech in AT&T’s device portfolio. The Burst combines 4G LTE speeds, a 4-inch Super AMOLED display and Android functionality in a slim, affordable package – just $49.99 with a two-year contract. It will be available in two color choices, titanium or ruby red.
For a limited time, customers may buy the Pantech Element and Burst together on contract and get the Element for $249.99 and the Burst for free.

AT&T will be the first carrier to offer Sony’s first-ever 4G LTE smartphone and first smartphone to be sold under the Sony brand in the U.S. Slated to launch in the second quarter, the Xperia ion from Sony is ideal for those looking for the ultimate smartphone viewing and listening experience.

Samsung Note™, Galaxy S II Skyrocket™ HD and Exhilarate™ Pantech Element™ and Burst™ Xperia ion from Sony Xperia ion will support access to the richest entertainment experiences from Sony Entertainment Network. Music Unlimited offers a global catalog of more than 12 million unique songs, while Video Unlimited has the latest Hollywood blockbusters and TV shows from all major studios. Xperia ion is also PlayStation® Certified, delivering a high quality smartphone gaming experience. Consumers will be able to access this content across Sony devices, including televisions, computers and tablets. Other features include Android 2.3, a 4.6-inch3 HD display, a 12-megapixel camera with Sony Exmor R™ for mobile, and a 1.5 GHz dual-core processor for fast browsing.