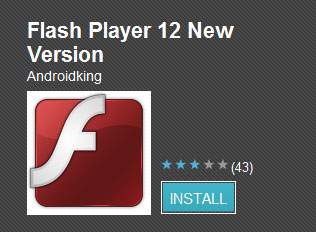 This is a moment when you’ve got to acknowledge the differences between the App Store and Android Market. Whereas Apple keeps a tight leash on what they allow into the market, Android lets the free market reign supreme. Both have their advantages and disadvantages but somehow one of the disadvantages is being promoted by Google on the Android Market.

An obviously fake/spam app called “Flash Player 12 New Version” by “Androidking” claims to be a brand new version of Flash Player and even sports a logo and screen shots lifted directly from Adobe. But when you download the app, as intellectually noted in the comments by Lindlay, it’s “Just a F**king link to a b*llsh*t site.”

For the most part it’s a case of no harm done, but it does offer some reason for concern. Most notably, the developer was able to generate enough downloads of the app to land in the “Trending Apps” section of Android Market. 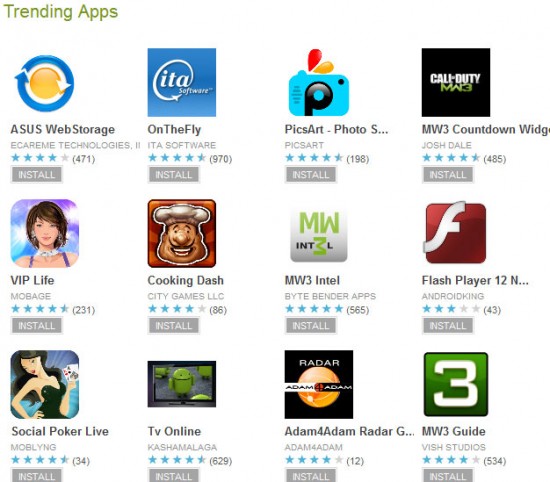 How are there enough sucker consumers to download “Flash Player 12 New” from a developer named “Anroidking”? Please people, pay closer attention to what you’re downloading.

Apple supporters would gawk at how such a crappy piece of idiotware infiltrated Android Market… and they would admittedly have a good argument. But on the flipside, sometimes you’ve got to sacrifice the purity of the ecosystem for freedom and openness, trusting that natural market forces and logic will let great apps prevail and terrible apps perish. And that’s exactly what’s happening.

Not only are horrible ratings/comments filling this app’s box to the brim, but the community is getting the message out through the social web, recruiting fellow Android fans to mark the app as spam so it’s dropped from trending and removed from Android Market altogether.

Some reports show the app has already been nuked and the developer banished permanently from Android Market. Most likely that will be the end of the story, but I hope the developer may face some additional scrutiny or punishment- probably not if they’re outside the United States. Of course Google has thousands of servers all over the world hosting this content so some of you may see the app and the trending listing longer than others. Just a warning that you should definitely be careful of what you download from Android Market (but this was an obvious trick).