Millennial: Android Owns Nearly Half of All Ad Impressions, Catching Up to iOS in App Revenue 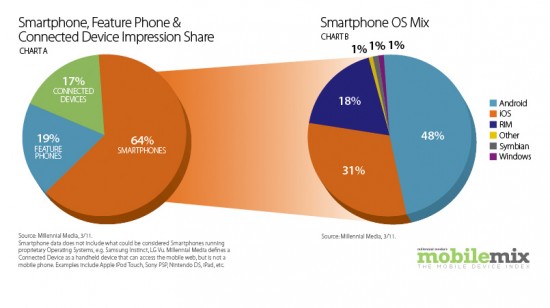 Millennial has released a new report this morning detailing ad growth for all mobile operating systems, including Android. The stat we like the most is the fact that Android accounts for nearly half of all ad impressions at 48% – sounds like the current state of smartphone market share to me.

Meanwhile, iOS trails at 31%, RIM comes in at 18%, and competitors such as Microsoft’s Windows Phone 7, Symbian and HP’s WebOS make up the other 3%. (Microsoft’s story is because it’s relatively new while Symbian and Blackberry aren’t really web-friendly devices and applications often come at a premium with no ads.)

With the advent of Flash Mobile and with more people getting Android 2.2 month after month, Android users are targeted more effectively on the web than any other device. And the revenue model in the Android market differs greatly from that of any other operating system.

Lots of studios – from high-budget to garage-based – are looking to ads to make money on their games and apps as Android users aren’t as quick to spend money as iOS users are. (And because there are still a ton of countries where you can’t buy Android applications from Google’s official market.) Despite that, though, iOS still leads the way in app revenue with 47%. Android’s not far behind anymore, though, as it sits at 36%.

As far as carriers go, Verizon holds most of the share of impressions at 19%. Sprint, AT&T, and T-Mobile all come in at 12%, 11%, and 10% respectively. Verizon leading the pack isn’t a total shocker considering they already have a huge Android following and now also have a stable of iPhone and iPad users. I am, however surprised by how close the race is between the bottom 3 carriers.

Apple leads the way as far as individual manufacturers, though, but Samsung comes in at a distant second with 15%, likely pushed along by the fact that it has budget-priced and flagship phones on nearly every major global carrier. HTC came in third at 10% and Motorola came in at 5th place with 9.6%. (Edged out only by RIM.)