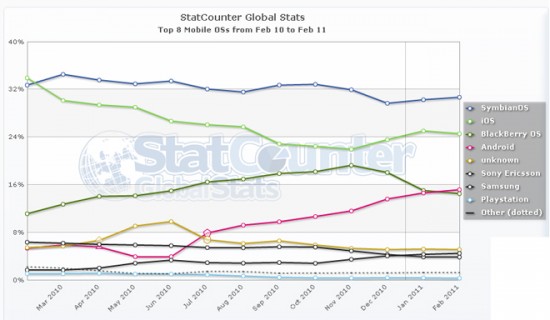 It’s not surprising considering just how many Android devices are being used by consumers today compared to just a year ago when its growth spurt was just getting going. The fact that Blackberry’s browsing experience still lacks in comparison to most of today’s modern operating systems also helps Android’s case. We expect that number to increase even more this year. Read on for full press details. [via IntoMobile]

Android overtakes BlackBerry for first time
Use of mobile to access Internet more than doubles over past year
Boston, USA & Dublin, Ireland; Tuesday, 8th March, 2011: Google’s Android mobile operating system overtook RIM’s BlackBerry globally for the first time on a monthly basis in February according to web analytics company, StatCounter. Its research arm StatCounter Global Stats finds that Android recorded 15.2% of the worldwide market compared to 14.5% for BlackBerry. Nokia’s Symbian still leads the global market with 30.7% with Apple iOS in second place with 24.6%.

StatCounter, which specialises in website analytics for organisations and bloggers, provides free lifetime stats and free detailed analysis on the latest 500 hits. Members can upgrade to access more detailed stats from $5 a month.

“The momentum is certainly with Android which has almost tripled its market share over the last 12 months from 5.4% to 15.2%,” commented Aodhan Cullen, CEO, StatCounter. In the same period iOS fell globally from 33.9% to 24.6%.#

In North America Android at 26.4% in February also overtook BlackBerry at 22.2%. iOS leads the North American market with 37.5%. Compared to its global presence Symbian is well back in North America with 5.7%.

StatCounter Global Stats are based on aggregate data collected on a sample exceeding 15 billion page views per month from the StatCounter network of more than three million websites.