We already know that the Droid X and the Droid 2 can be overclocked, but did you know that they could be overclocked… to 2 GHz? Matt4542 and Joe – members of Team DeFuse (get it? eFuse? DeFuse?) – have taken it upon themselves to crank this thing up to 2000 MHz using setCPU, their Fission ROM, and some scarily good magic. 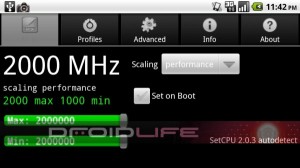 It’s not stable, apparently, and we can’t tell from this video if real world performance gains are much better than what you’d get from the stock 1GHz on both of these phones, but they’re working feverishly to get this thing running smoothly as they believe that the processor (TI OMAP 3630) inside both of these are capable enough of doing so.

[Update]: Ladies and gents, we’ve been duped. It’s been determined that this whole thing was a hoax after Coolbho3k questioned the duo’s developments. After he responded, Team DeFuse posted another video showing how they were able to “overclock” their phones to 2 GHz. They then proceeded to “overclock” it to 3 GHz. Judging by the method used and the fact that they refuse to show any benchmarks, I think it’s safe to say that we won’t be believing a word they say. 2GHz was actually believable. 3 GHz? Come on, guys. [via Android Central]

PS: You guys have accused us of spreading misinformation with this story. We reported this story on the basis that Droid-Life – in the original source link – pegged Team DeFuse as credible. You then go on to compare us to Android Central (second source link) who reported the same and later updated their findings, as well. Not to sound like a sour mouth, but if you look at any other Android and technology site that reported the original story, you’ll find that things weren’t much different across the board.

If you stop following Phandroid over this one hiccup, you’ll have to stop following Engadget, Droid-Life, Gizmodo, Android Central, and countless other sites because we didn’t do anything they didn’t do. That’s not to throw any of those great sites under the bus, I’m just protecting our name here. That said, I apologize I didn’t see the updated situation fast enough. It’s not in my blood to knowingly spread false information.