As you guys may already know, we attended the Samsung Experience event last night in the Big Apple where Samsung introduced their Samsung Galaxy Tab to those of us here in the states. You’ve already heard the juicy bits of news to come out of that event – such as the fact that it’ll be coming to all four major US carriers at one point or another – but we haven’t been able to give you guys any accurate opinions up until yesterday.

Much quality time was spent with the device – which was still a prototype version of the international offering – and we’ve got mostly good things to say about it. Starting with that all-important 7-inch display, we’re sure that you guys won’t mind the exclusion of Super AMOLED as this thing still smacks you in the face with a nice, healthy dose of “OMG that screen is amazing.” That’s probably a bit of an over-exaggeration, but I didn’t find myself letting out a sigh wishing that they’d include the display that’s wowing everyone on their Galaxy S phones. The display’s WSVGA resolution probably helps a ton, though I know a lot of you are wishing they’d go even higher. That’d probably be necessary for a 10-inch version of the Galaxy Tab, but I couldn’t complain about what we were shown. It isn’t until you watch a video on the screen that you start seeing just how crisp it really turns out to be (we checked out a quick trailer of Mission Impossible 3 on the newly-launched Samsung Media Hub). 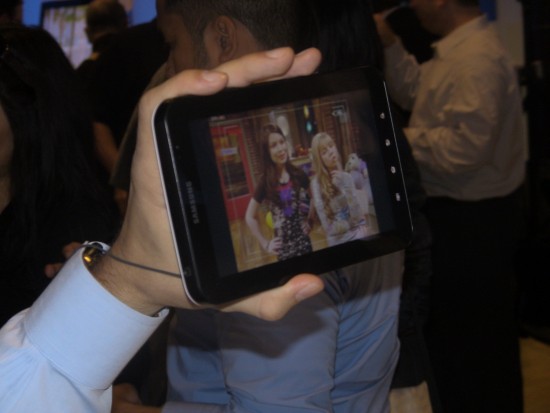 Unfortunately, we didn’t find the same responsiveness that you would on a Galaxy S phone. It took a bit more pressure to register button presses (though not to the point where you’d mistake the touchscreen to be resistive) and swiping around the OS wasn’t the most pleasant experience of the night. Samsung urged that these were still unfinished units, however, so we can’t say for sure that this’ll be the case once they finally come to market.

Another thing we were surprised to see is an Android market app – The Weather Channel – not being scaled to full screen on the Galaxy Tab. Upon launching the app, we were met with thick, black borders on all four sides. It doesn’t surprise me that we might see the same from developers who don’t tweak their apps to scale (which Google shows you how to do ), but it surprised me because we know Samsung was – at one point – going out and working with developers to fix their apps for this display size and resolution. The Weather Channel being preloaded onto the device and having this issue caught us off guard as we’d imagine Samsung would prioritize that. We might just chalk it up to Samsung leaving it there as an example of what an application would look like from the Android market if the developer isn’t mindful of the Tab’s size and resolution. It’s probably best that applications aren’t forced to scale from their maximum WVGA resolution to WSVGA because a lot of them might not play nice until the developer does something about it. 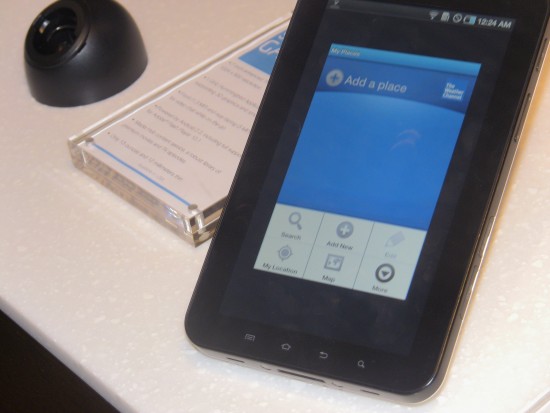 TouchWiz 3.0 was a major step in the right direction on the Galaxy S phones, and it looks even better on the Galaxy Tab. We’re met with a more stock-looking launcher that allows you to change the shortcuts at the bottom ala ADWLauncher or LauncherPro. You can still find TouchWiz scattered throughout the device, but it doesn’t get in the way of using this thing at all. In fact, we’d elect to call it a preference more than a hindrance, at this point. The browser is one such app that Samsung elected to go all out in customizing. Yes, it does look a lot like Safari for iOS, but that shouldn’t be looked at as a bad thing. The tab is the first Android device that seems to blur the line between it being a tablet slate with Android slapped onto it and it being a worthy replacement for whatever netbook you’re still using.

Staying on track with the browser, we were treated to some Flash content courtesy of Adobe’s official plugin for Android 2.2. Playing games – especially ones optimized for mobile – is just as smooth as it is on other devices enjoying Android 2.2 today. We’re not sure if the browser itself is 100% finished, though, as it chugged along while taking Phandroid.com for a spin. Scrolling – while not the choppiest experience we’ve run into – definitely left a bad taste in our mouth. We also noticed a bit of lag when using pinch to zoom, but it’s worthy to note that another unit didn’t show that same lag. Perhaps these are just products of the software not being fully tweaked (and that’s all we can assume as the Galaxy Tabs at the event were nowhere near final.) 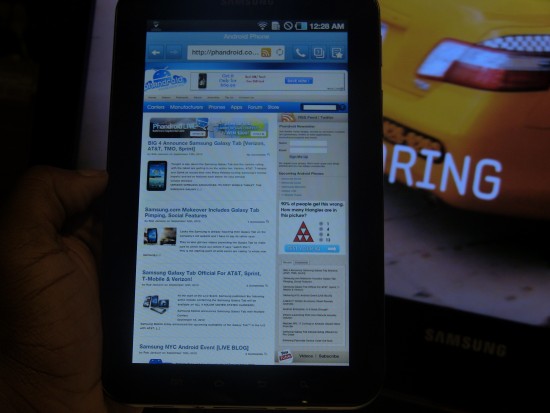 One cool thing we liked about the Galaxy Tab was how Samsung developed their applications to take advantage of the screen real estate while in landscape mode. It’s especially noticeable in their calendar and email apps. Specifically for email, when you switch orientations to portrait mode you get a two-pane navigation UI similar to what the iPad offers in many of the apps for that device. The left side shows you header information – such as subject, sender, size, and if there are any attachments – while the right pane displays the emails themselves. It’s a very slick interface that just feels natural and continues to blur that line between this being a tablet and a mini netbook (more on that later, I promise.) The calendar app was a little bit different in how it treated the switch from portrait to orientation. In portrait mode, we’re greeted with a look at the full suite of days in September at the top and a look at the upcoming agenda below that.

The switch from portrait to landscape was more subtle in the calendar app where the days of the month are displayed on the left and the agenda on the right. On most apps, switching to landscape mode would spell doom for the layout as they wouldn’t reorganize the elements to account for that extra space on the left or right (making up for a lot of white space on the left and right sides or making for “squished” elements vertically.) Samsung’s looking to remedy that by showing developers how to create the best possible experience for their users on the Tab. They’ve certainly shown us that Android apps don’t need to be one dimensional with a bit of work.

We got a chance to do some video calling on the device, as well, using Qik to connect with the fine folks standing across from us at the other demo unit. While it was a painless process to actually place the video call compared to the Samsung Galaxy S, the experience itself wasn’t all too great. The 1.3-megapixel camera on the front should suffice as far as video quality goes, but you’re going to want to be on a fast WiFi network to ensure a buttery smooth experience. Kevin can vouch for the horrible WiFi connection everyone was on at the event, though, and we can’t blame Samsung or the Tab for poor video calling performance as many people were uploading gigs of data over the same connection (I confirmed we were all on the same connection with one of the reps.) We also didn’t have a chance to check out the 3-megapixel camera on the back of the device, though it should be able to record DVD quality video. It’s also worthy to note that the AT&T version will not be coming with the front-facing camera – one of the few customizations Samsung will make to this device across the boards, software aside. 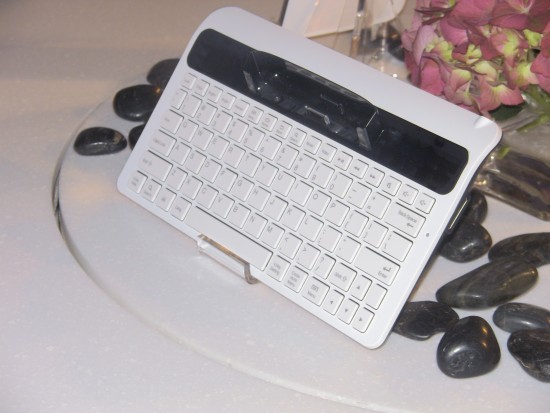 I promised we’d get back to the whole “netbook” thing, and here we are: accessories. On hand were just a few of the accessories that Samsung’s going to be offering when this thing launches and I got a quick chance to type on that full QWERTY keyboard dock that you’ve probably seen before (the Tab sitting inside of it wasn’t turned on so there was no reason to linger around the area for too long.) It’ll only support the Tab in portrait mode (due to it needing access to the connector) but this will give you a reason to chuck out that old netbook you’ve been using (if you don’t use it for intense computing, anyway.) The keyboard was small enough to throw into a bag, yet still spacious enough to comfortably type on with a full set of keys. It was by far everyone’s favorite accessory of the event, sitting up next to the car dock (that will turn your Tab into a massive GPS device) and the standard keyboard-less dock (that includes an HDMI-out port for watching your video content on the big screen).

Overall, it was a pretty nice piece of hardware with some very impressive software. I think Samsung’s truly the first to show everyone how to create a true tablet experience using Android in its current state, and that’s just going based on an unfinished product. I hope developers heed Samsung’s call to create apps that take better advantage of bigger screens and higher resolutions as they’ve shown us that Android isn’t just a flat, one-trick pony (we’ve already known that, but now there’s even more evidence.)

PS: We did get a lot of nice video for you guys to sink your teeth into, but due to crappy hotel WiFi connections, crappy coach bus WiFi connections, and a ton of other crappy circumstances, we weren’t able to get those up right away. Stay tuned as we’ll be dropping some nice footage later in the day straight from the Samsung Experience.