When Google Wave made its introduction at Google I/O in May 2009, Google made it clear that they had a vision – a new age of online asynchronous collaboration – and they weren’t going to sit by and let their brains rest on it. They went to town on the product and amazed thousands of developers and even more onlookers as they demonstrated the potential of the platform and just how cool it could be once developers caught on.

Unfortunately, that last part never happened. Google yesterday announced the suspension of any further development (on their part) on Google Wave citing lack of user adoption. We saw a few big players pick up on Wave and all of the benefits it proved to bring to an enterprise – Novell being one of them – but no one else saw the need to make a ruckus over it. Google’s initial stance on relying on developers to push the platform forward backfired as developers quickly forgot about Wave and Google did nothing themselves to supplement the lack of progress.

Google promised great support for HTML5-based versions of Wave for use on today’s advanced smartphones, and even expressed interest on getting native options going for their (and our) beloved Android. That never came to fruition as they still had to focus on getting their full web offering accepted by the net’s technical majority.

Some would venture to claim that it’s not Google’s fault, though: users just may truly be afraid of change. There was a time – right when invites for Wave started going out – that everyone and their cat wanted one: you couldn’t go an hour without someone asking you how did you get Wave and if you had any invites to spare. Most users were just boarding a hype train, though, as their only interest stemmed from those of their friends. Most were faced with confusion and needlessness as they gleefully accepted their invite. “What does this do? What can we use it for? What’s so different about this compared to traditional collaboration methods such as chat and email? Is this like Twitter for Google?” (I actually had a friend ask me that once. Sad thing is, it definitely could’ve been a “Twitter for Google” thanks to how extensible Wave is.) 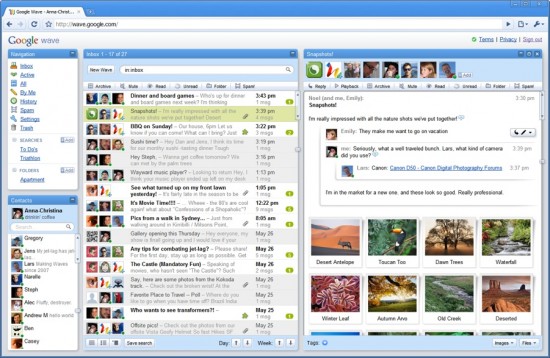 Thus, the ball began to fall. While many have posted success stories thanks to Google Wave – the age old “college group needing to finish a last minute paper or project” keeps popping up – most can’t say they ever found a need to log back in. Google’s suspending development on their own side, but source code is still being offered for anyone who still wants to use Wave and maintain their own installations (and the core Wave site will be intact for the remainder of the year).

Google’s always been the one company that knew how to admit defeat in their affairs, so we applaud them in bowing out quietly as they move on to try and push the web even further than they already have. Goodbye, Wave.