Does your “older” phone need an afternoon nap?  Sure, these young whippersnappers can go for 20 hours without a recharge. Realistically, though, most of us don’t (for one reason or another) own a Droid, nor can we make it a day without at least few minutes of down time connected to some sort of energy source.  Neither can our phones.  Or can they?

Screeble Lite is not a miracle cure for phone fatigue.  It did make it to the final round of the Android Development Challenge (2), and it is an emerging implementation that could teach an essential lesson to Google (and Microsoft) about usage-based customization.  It’s simple enough to tweak manually, but it’s built on usage.  It automatically locks/turns off your phone based on its accelerometer reading.  In other words, if you are holding your phone at an angle, it stays on, if you lay it flat, or if it’s upright in your pocket, it turns off.  Conversely, and the actual paradigm of the app is that it keeps your phone on if you’re using it.

Screebl won’t be enabled by default. Check the Enable box: 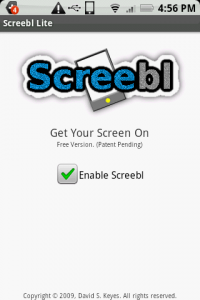 It will show you simultaneously inside the app and in the notification icon that it’s at work, in a noticeable-but-not-too-obnoxious green.

One of the million things I like about Android is the ability to change settings live, while things are running.  I never lost Screebl functionality while I was setting it up.  One of the kickers that I think will have an influence on development everywhere is this developer, David Keyes, included a video both introducing/personalizing himself, and providing two contexts for the app, one for development (why he produced it) and one for you (why & how you can use the app).  The joy of this little video is he let’s the app sell itself; he just explains it.  The world needs more of this. 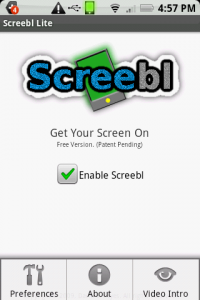 Setup is well explained in each of the option descriptions.  You can turn the notification off, which is key (although it brings to the fore Android’s inability to put up notification icons without having a notification in the drawer).  The more frequently you have it sample (read the orientation with the accelerometer), the more battery it will use, but the better it will work.  The Orientation Settings need some experimenting on your part, but it’s stellarly easy to do.  The handle in the middle of the slider is a flashy and useful feature. This is excellent customization: getting a user to explore an aspect of their usage they haven’t considered yet, and making it fun to do.  I’m not sold on the Stillness Setting myself.  My phone is pretty active hanging off my shoulder in my bag. 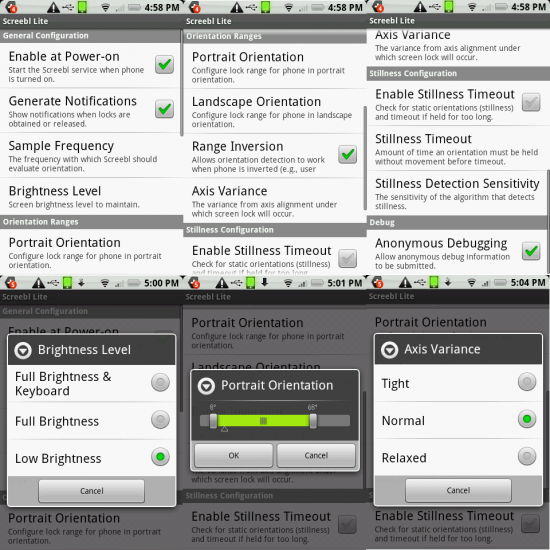 Screeble Lite is currently in Beta, which means it’s developed enough to release with a caveat: it might not yet be up-to-snuff, and feedback is welcomed.  On the Developers official site there’s a place to discuss and offer feedback.  The lack of a link to contact him from inside the app surprises me (but if he gets barraged with emails, and then takes the link away, it might create more problems than it solves.  Perhaps he just has a sharp eye on the future.)  He notes on his site that localization (getting the app to work in languages not native to the developer) was/is difficult.  As more phones are manufactured, and more ROMs for each of them are rolled out, apps like this, which manipulate hardware, will be bowled over all too often, adding even more difficulty to full development and maintenance.  I seem to be taking advantage of that caveat….   Hi.  My name is Janis.  I’m an app-oholic.  I have a problem running background apps.   The Screeble app has to be actually running for it to keep the phone on.  I haven’t left enough memory for it to do its job properly.

UPDATE 11/23/09 9:48 p.m.: Something whacky happened and we ended up publishing my first draft of the review.  It could very easily have been user error on my part, or a server deal, since nothing I did on Sunday the 22nd seemed to have saved.

David did respond to my email within a couple of hours, and what he wrote was longer than this review, and so incredibly articulate and organized I questioned who should be doing the writing. (Although if we switched roles at this point I’d be banned from Market in two days, purely for bad quality.)  Here are highlights.

*tip for those of us with hard keyboards: turning off auto-rotate may help preserve battery life by letting the accelerometer rest.

Even with all of these great features in the hopper, If you can hear yourself saying: “Mom.  Mom!  MOM!…  You were nodding off…. Yes, you were.”  Screebl Lite will alleviate some of the frustration of having to deal with both your mom and your phone doing the same thing, as is, for every phone.  If you haven’t said it yet, you will.  Get Screebl before you really need it.

Reliability: 2 stars (but that’s for me and my overloaded phone)

Customization: 4 stars (I know the app will grow here)

Ongoing memory use: a little less than 1mb, but the app itself, not just the service, needs to be running