The promised February launch of the Xperia X10 may be put on hold but that hasn’t stopped information from flowing in elsewhere – a bunch of new information has poured in about the device and Sony Ericsson’s Android initiative in general. First off, what I’m sure you’re seeking most, hands on reviews of the device from Engadget and Gizmodo:

Engadget said their experience with the X10 was merely mediocre, noting a horribly half-decent experience with the UI that would sometimes lag terribly and other times be lightning quick, at seemingly random intervals. It has potential but these guys say it gets bogged down and slow rather quickly  and it needs a LOT of work – especially the software keyboard:

They’ve also got a video on viddler of the X10 in action.

The guys at Gizmodo had a similar experience of mediocrity but whereas others think software tinkering can fix the problem, this hands on suggests its more of an all-around problem:

The X10 is perfectly fine. It’s just that everything outwardly belies the specialness of what’s going on inside. The all plastic-build feels just slightly better than cheap, the shape is kind of awkward unless you have gorilla hands, the design—it all just feels, well, incredibly ordinary.

Not exactly what you want to hear from people craving Xperia Android goodness, but they DID say the camera is awesome which is pretty exciting. A video of them testing the phone out:


Both of these hands on reviews highlight two features of the Sony Ericsson Android experience – MediaScape and TimeScape. Together, they make up what the company is now calling Nexus – essentially their version of HTC Sense or MOTO BLUR. MediaScape is essentially your all-in-one media center and TimeScape is your integrated contacts manager. It’s nice to know that SE doesn’t FORCE you to use their solutions and Android’s default apps for media and contacts are easily accessible. Not that you would WANT to use Android’s built-in media player but hey, the option is all yours.

Developers will now have a chance to build apps in HTML, CSS and Javascript for this new SE Nexus platform with the invention of the company’s WebSDK and you can test your applications in a simulator called “PhoneGap”. Why that name? It doesn’t ONLY work for Android but you can develop apps that will work on Symbian as well. Yippee. 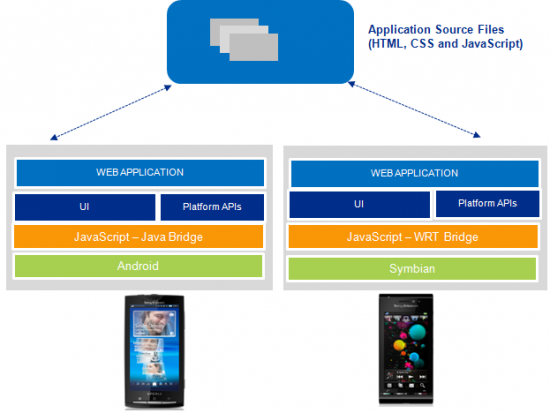 The question on most people’s minds is “how much will this thing cost?” The answer? A lot. The Wall Street Journal is reporting the phone will cost $879 without a contract. Even if a carrier were to offer a ridiculous $500 subsidy for the phone it would STILL be $379 and EASILY the most expensive Android Phone. Not to mention SE hasn’t exactly had the easiest time coaxing carriers into partnerships. If they’re going to be asking this much for the phone they better darn well fix the problems and make it undeniably awesome – which it clearly isn’t at this moment.