The migration continues. Motorola has proclaimed an aggressive move to adopt Android as their smartphone platform of choice and HTC is clearly in robot mode as well. It sounds as if Samsung will join that bunch as they increase their Android lineup at the expense of Windows Mobile. More specifically, Android will compose 30% of their phone portfolio in 2010 and beyond (rumor).

I’m a bit surprised that the “beyond 2010” doesn’t account for even MORE Android considering how aggressively the company looks to be cutting back on WinMo devices. According to HMC Investment Securities Analyst Greg Noh, here is how much of their lineup will feature Windows Mobile phones:

Or for the graphically inclined: 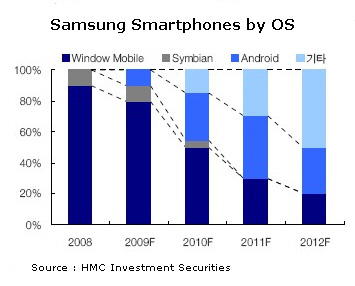 Sounds terrible for Microsoft but the fate of Symbian is even worse – by 2011 the manufacturer won’t produce any phones with the Symbian operating system. Ouch. So why wouldn’t Samsung ramp up their Android production levels even further?

A new proprietary Samsung OS should arrive next year and gradually form about half of all the company’s smartphone sales.

Doubtful. That is assuming that their Samsung OS phones sell well compared to their Android Phones, which I don’t see happening. Regardless of the ratio of Samsung OS models to Android Phone models they make, unit sales are a figure only the market can determine. And right now, the market is really, really liking Android. Somehow they have their own proprietary OS eating into Android sales from 2011 into 2012. What do they know that we don’t? If their Android Phones strongly outperform devices running their own proprietary OS, any good business person would skew production towards Android. So I’m wondering what the heck this optimistic SammyOS is all about.

The original article/note was found at TelecomsKorea.com but has since disappeared. Props to Electronista and JKonTheRun for nabbing the story before the plug was pulled. Keep in mind this isn’t official word from Samsung, this is rumored and speculative information and up to this point, we don’t have any feedback or comments from Samsung themselves on the matter.