Well what do we have here? A whole HOARD of crazy Motorola Android rumors! Alan, a Phandroid commenter on another Sholes article, pointed us to an article on Dialaphone that claims to have dug up a Motorola “Comeback Roadmap” for Q4 2009 and Q1 2010: 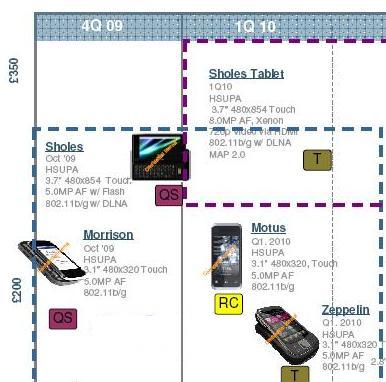 Holy crap! A Motorola Sholes Tablet?!?! Alright lets back up a few steps… first of all this is just rumor and we can’t cuont this as anything official, certifiable or even credible since we don’t REALLY know the source, just that Dialaphone did some digging and stumbled upon it. That being said, here is what we learn:

The Morrison is already announced as the CLIQ/DEXT – old news in terms of rumorville. What is crazy is we’re going to jump right over the Motorola Sholes here which doesn’t have any new info… just an October 2009 release date that would make so many people happy. But things get MUCH more interesting with the other three, starting with this:

Alright so what the heck is/would be the difference between the Sholes Tablet and the Sholes? It comes out later, has a better camera and does 720p video? I’m guessing it also ditches the hardware QWERTY which would make complete sense… but in that case, and with only a 3.7-inch screen, this is definitely just a full touchscreen phone and not an actual Tablet. I’m also not sure what MAP 2.0 means but if this thing has integrated GPS Navigation capabilities… watch out Nuvifone!

So there aren’t many specs to distinguish these phones from one another… in fact, there isn’t even indication that these phones are running Android. We know the Sholes/Morrison are Android so you would assume the Sholes Tablet is Android, right? Plus pile on the fact that Motorola is 100% dedicated to making a huge Android run and this makes perfect sense.

So there you have it… the first rumors of the Sholes Tablet (rename it please), Motorola Motus and Motorola Zeppelin heading to market first quarter of 2010!