Unless you’ve been hiding under a rock you’ve heard about Google’s formal complaint of the Android modding scene. The problem is that mod creators – with Cyanogen being the fall guy – were redistributing Google’s Android applications which were intended to be close sourced with non-transferable licenses. In Google’s official follow-up they explained that while they supported the mod scene, Google Apps couldn’t be package with these custom OS creations.

Enter the Open Android Alliance. Their goal is to create Open Source alternatives for every single proprietary Google Android Application, making it possible for software engineers like Steve Kondik (Cyanogen) to distribute his ROM as a device-ready solution. Here are the components they are currently working on (code.google.com):

While Cyanogen has offered to lend his code to the project he is in NO WAY affiliated with the group (extra emphasis needed to illustrate the *Disconnect*). According to The Register, it started with the help of Jared Rusch, a 19-year old college student from Canada:

“We’re trying to make the Android it should have been in the first place, completely free, open source [so that] anyone can use whatever, because we’re not keeping applications to ourselves,” … “We believe Android is a good platform to build upon and who knows, maybe we can make something better than it originally was.”

But in keep in mind what the group states on their Google Code page:

Above all, remember, we are NOT “Anti-Google”. We are “Pro-Android”. Please act accordingly when posting on this project.

That is the sentiment I hope a lot of you will support. The group says an alpha version of the software will be available from 2 weeks to 2 months from now, but I think that is an incredibly optimistic goal given the scope of the project. Especially since the whole plan may be based on a legal impossibility.

Above and beyond the distribution of Google Apps, being discussed now is proprietary device drivers that are necessary to make these phones operate. If (like the apps) these device drivers can’t be redistributed or a workaround can’t be reached, it threatens to further stifle progress. 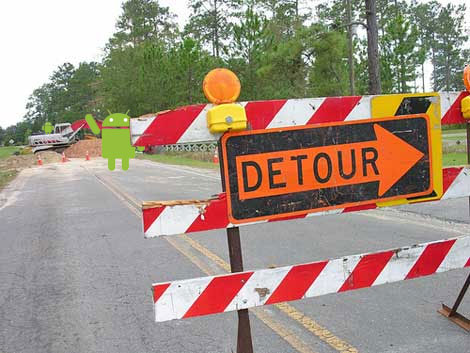 Unfortunately, this whole issue has been magnified by public outrage that lacks any patience or objectivity. And not the good, “we’re looking into this more closely” kind of magnification. No… the “it is sunny, I’ve got a magnifying glass and SWEET – AN ANT!” kind of magnified. Google wants to do the right thing. Cyanogen and other modders want to continue modding. Right now there are some critical issues with reconciling the issues but all parties are doing their best to reach a conclusion, work around or solution.

I couldn’t have said it any better than Cyanogen in his article titled “The Current State” where he calmly explains the issues at hand. In fact, we invited Cyanogen to do Phandroid Podcast 9 which will be published shortly but he declined, citing that there was no need to kick up dust when his blog post says everything he wanted. To be honest, I completely agree. So take a deep breath, check out his article, understand that non-violent patience is a virtue and stay tuned for Podcast 9.

And best of luck to the guys from the Open Android Alliance.