Today Google announced a new personal communication and collaboration tool in the early form. It is called Google Wave and they need the help of developers to complete the project, which is built in HTML 5. Yesterday Google was the new American Idol and Oprah, today (or this year) Google is(or hopes to be) the new Facebook/Twitter/FriendFeed/Evite/etc…

The same engineering leadership behind Google Maps is behind Google Wave and this is the first time anyone outside of Google has seen this – it is incredibly rare to be sharing a project in such early stages. It seems like a mashup of your GMail combined with the realtime presence of Twitter with the connectedness of Facebook. 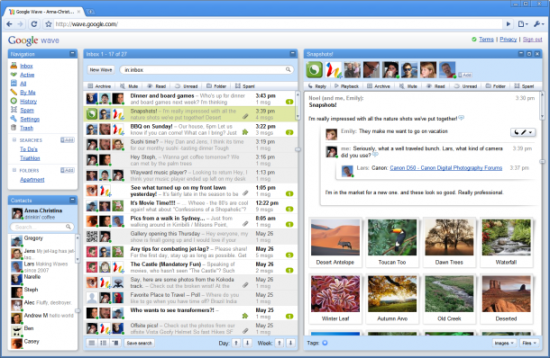 It won’t be open to the public until later this year but another interesting aspect of the platform – developers will be able to build applications for it! I suppose that is where some of the Facebook influence comes in but remember… this is HTML 5. And also remember, at one point Google was rumored to be buying Twitter. Looks like they are building their own Super TwitterBook Feed! 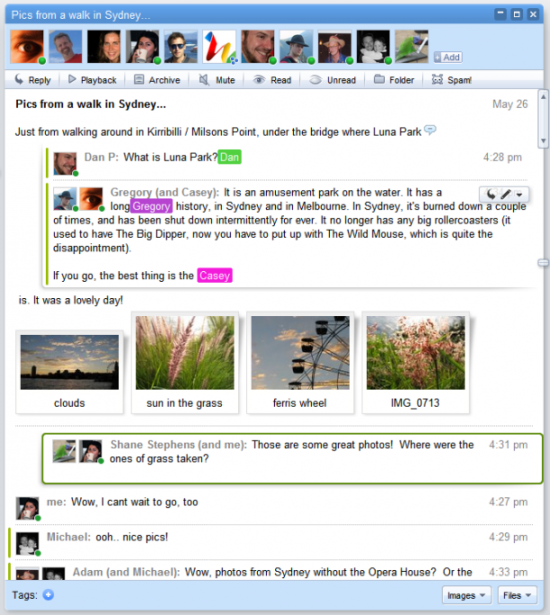 At this point I have no clue what Lego had to do with it. Oh well… we still love you LEGO! Where better than to get Google Wave information than straight from the horse’s mouth? Google has information up at http://wave.google.com

What is a Google Wave?

A wave is equal parts conversation and document. People can communicate and work together with richly formatted text, photos, videos, maps, and more.

A wave is shared. Any participant can reply anywhere in the message, edit the content and add participants at any point in the process. Then playback lets anyone rewind the wave to see who said what and when.

A wave is live. With live transmission as you type, participants on a wave can have faster conversations, see edits and interact with extensions in real-time.

What is the Google Wave API?

The Google Wave API allows developers to use and enhance Google Wave through two primary types of development:

Google Wave is currently available in a developer preview as the APIs and product continue to evolve. Accounts on the developer sandbox will be given out to people intending to build with the Google Wave APIs prior to the public release.

For more information about the capabilities and use cases for each development option, consult the Wave Developer’s Guide.

Since Google Wave is Open Source, anyone can build their own version of Google Wave – all the resources are at WaveProtocol.org

This morning at Google I/O we are unveiling a developer preview of Google Wave, a new collaboration and communication product. Google Wave introduces a new platform built around hosted conversations called waves–this model enables people to communicate and work together in new and more effective ways. On top of that, with the Google Wave APIs, developers can take advantage of this collaborative system by building on the Google Wave platform. We want to expand upon that platform, which is why we’ve put together the initial draft of the Google Wave Federation Protocol, the underlying network protocol for sharing waves between wave providers.

Yes, that’s between wave providers: anyone can build a wave server and interoperate, much like anyone can run their own SMTP server. The wave protocol is open to contributions by the broader community with the goal to continue to improve how we share information, together. If you’re interested in getting involved, here are a few things you should check out on www.waveprotocol.org:

This is just the beginning. To help potential wave providers get started, our plan is to release an open source, production-quality, reference implementation of the Google Wave client and server, as well as provide an open federation endpoint by the time users start getting access.

We’re eager to hear your feedback, so please tell us about your interest, and drop a note on the technical engineering forum with your feedback.

Beyond the federation protocol, you may also be interested in learning more about the Google Wave APIs, as described on the new Google Wave Developers blog.


And what do we have on said “Google Wave Developer Blog”? An introduction to Google Wave APIs that come in two flavors:

With Embed, you’re able to bring waves into your own site through a simple JavaScript API. For example, embedding a wave in a webpage is a good way to encourage a discussion among the visitors. With Extensions, you’re able to write programs, which are packaged as Robots or Gadgets, that provide rich functionality inside the Google Wave web client.

Combine Google Wave and Google Gadgets and you can play embeddable games like Sudoku in a wave: 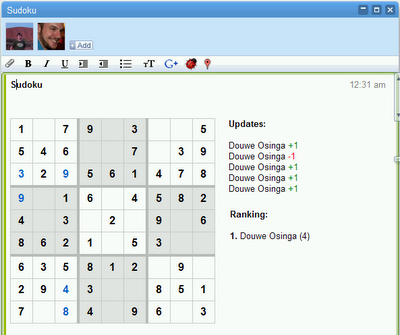 So how does this fit into Android? Well… it works on Mobile phones… like Google Android phones… and they demo Google Wave on an Android device and iPhone. Holy awesomeness and world-about-to-be-taken-overness!

Right now you’re probably asking: “Where do I sign up?” Good question… and I’ve got the answer:

Google Wave is looking pretty crazy and the crowd and blogosphere and interwebz are all LOVING what it seems it could become. Google Wave appears to capture elements of a Wiki, too since everyone can edit it.

I can’t wait to tell you guys this so I’m hitting publish. Updates are coming.

UPDATE #2
You can organize waves by folder, tags and create new waves that are lists of links to other waves.

Interview with Google Wave Founders conducted by TechCrunch: What I may find most amazing is Google Wave started in 2007 with 4 or 5 engineers and now, approaching launch, there are about 50 engineers and it is mid-2009. Seems like a TON of work has gone into this… super excited!