Android Netbooks: Coming And When?

We’ve speculated for quite some time that Android isn’t only for phones. While 2008 was all about the G1 and 2009 will likely see a slew of handsets, 2010 appears poised to see an Android Netbook. Scratch that… an Android Netbook already exists: 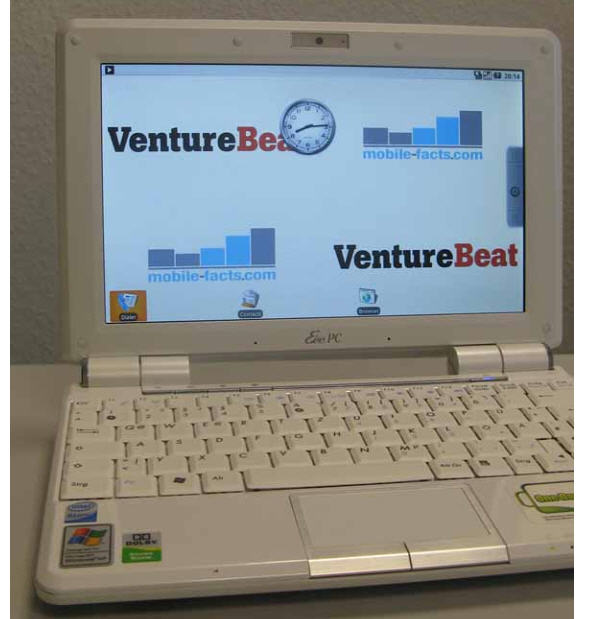 The above image is Android running on an Asus EEEPC. The folks at VentureBeat are responsible for compiling Android to the netbook and it only took 4 hours to complete. They were able to get web browsing, music playing, networking and more working smoothly… so it’s completely feasible that computer manufacturers could bring an Android Netbook to market sometime in 2009.

Why an Android Netbook?

Unless you’ve been hiding under a Palm Foleo somewhere, you would know that Netbooks aren’t just a little hype or up and coming possibility – the phenomenon has fully arrived. A quick look at Amazon’s Best Sellers in Computers shows that Netbooks are enjoying a huge portion of purchases thanks to their price and portability.

Google has yearned for a way to increase revenue outside of their contextual advertising found across the web. With mobile phones representing a HUGE growth sector, Android is a leg into a brand new market. But if Android can find itself mass distribution on Netbooks, with a growing market matching mobile, Google could do the Hokey Pokey and turn themselves around.

Do you think Chrome is a coincidence? In an unrelated article about the Google Chrome web browser which just came out of Beta, listen to what Sarah Perez from ReadWriteWeb has to say about it:

However, despite Chrome’s lack of features, its lightweight feel and speedy browsing have made it a popular choice as a Firefox alternative for light web surfing…especially the kind done on a netbook while killing time at Starbucks.

HTC executives have said that their Android based T-Mobile G1 handset is already eating into sales of Windows Mobile devices. With an Android Netbook, you can be sure that Google will start chomping into the market share of Windows and other PC software. Google Docs, anyone?

Put Android on a netbook, add Google’s suite of apps like Spreadsheets, Documents, Presentations, Reader, Mail and more. Then give it the quickest and most functional web browser on the planet. Provide all that for free and slap it on your favorite netbook. Offer Android Market for Netbooks so that users can download – for FREE – useful and relevant applications that improve their capabilities and inherently, lives.

There it is… the Android Netbook. A killer computing system where you pay a minimal amount for the hardware and are automatically plugged into some of the most powerful software on the planet… for free.

One problem Google Android could run into with this is the “fragmentation” which Google’s Open Source OS hoped to avoid completely by creating ONE operating system for ALL devices. Some level of fragmentation is inevitable, but Google has already shown their determination to plan for this in the Android Market.

Currently, Android Developers can choose to target specific countries with their applications, ensuring it doesn’t appear to those who don’t/can’t use it. It’s also in their best interest to target appropriately – if you there is an application about Bike Riding in France published in French to those stateside, the app is likely to get crushed with terrible ratings and others, even those would would enjoy the application, would be reluctant to download the poorly rated app.

Have an application developed specifically for netbooks? Go ahead and check Netbooks and uncheck Phones as you prepare to launch your application in the market and the problem is solved. This is, of course, assuming the app is only targeted to Netbook users. Mostly all of the applications on the market should work just fine on Netbooks.

Following up their piece on Android Netbooks, VentureBeat received a flurry of emails with questions about the possitibilities and potential, publishing answers to the most frequent answers with an Android Netbook FAQ. Here are the summarized answers:

Another interseting thing to note is that while the Mobile Android OS relies on the active participation of Wireless Carriers, Android Netbooks remove that process which has proved to be tedious. The removal of this hurdle gives me hope that sometime in 2009 we’ll at least be hearing more about an Android Netbook.