Usually when we recap events we start them off with, “as expected” but no such comment will be made this time as Nokia announced the N97 at their Nokia World event in Barcelona, Spain today. The phone will be $550 Euros before carrier subsidization and its being described as the Noka 5800 on Steroids. 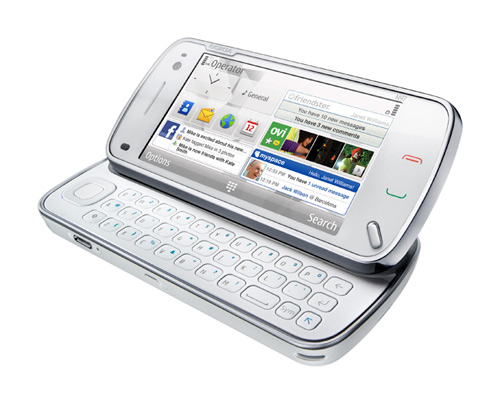 But what we’re most interested in here are some jabs that Anssi Vanjaki, Executive Vice President (Markets) for Nokia, took directly at Google. Three quarters of the way into his monologue which he delivered in dramatic fashion, he made some direct barbs at Google which I have tried to republish word for word but for which I can only be credited as paraphrasing:

“There is a company that wants to index the world. We are going to go deeper and coordinate the world. Not just standard like a standard GOOOOGLE Map. A map that is dynamic with vector graphics…. etc…”

Notice all the O’s in Google? Yeah… he said it like that and with a spooky, ominous tone that came off as a “yucky” kind of “nanny-nanny-boo-boo”. First of all perhaps Mr. Vanjaki should be a bit more familiar with Google’s goals. Here is Google’s actual mission statement:

Google’s mission is to organize the world’s information and make it universally accessible and useful.

I think “indexing the world” and “organizing the world’s information to make it universaly accessible and useful” are quite different. I think Nokia is perhaps just a little ticked off that a little website that just conducted internet searches at a weird sounding URL is now threatening their market share.

Taking Google head-on by name was an interesting approach but not one that I think serves Nokia best. When you go out of your way to insult another company at your own companies self-proclaimed revolutionary announcement, it doesn’t take a genius to figure out why. Nokia is obviously nervous that Google’s Android seems poised to take off while the Symbian Foundation still has a lot of groundwork to lay. Those words made Nokia seem vulnerable and threatened.

I don’t want to take TOO much away from Nokia. To their credit the device looks pretty darn sweet, its packed with multimedia capabilities and seems quite functiona although you need to really play with one for awhile to determine that. But I felt that this whole Nokia-Google comment needed to be addressed because it stuck out like a sore thumb in the presentation… or am I the only one who was slightly shocked by the comparison?