A few short weeks ago we were told not to hold our breath for a Facebook application on Android. In fact, Facebook execs themselves were heard calling Android “vaporware” and saying things like, “Android sucks, it doesn’t matter.” The more official explanation from facebook was they would rely on 3rd party developers to make Facebook apps on Android. 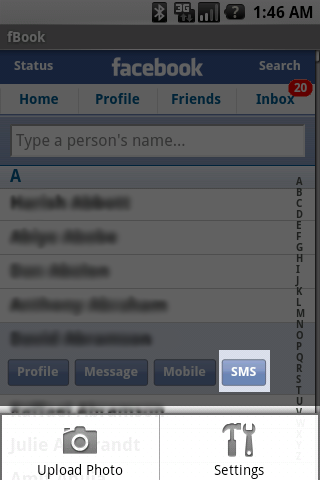 That time has come: fBook is the first Facebook Application on the Android Market and it was developed not by Facebook, but by Next Mobile Web. It describes fBook as “a wrapper that optimizes and fixes the Facebook iPhone web app for your Android phone.”

The description of the application as a “wrapper” is well put… many people said it was the same as m.facebook.com save for a few small additions like picture uploading and push capabilities. The ability to make your phone ringt/vibrate when you’ve received messages or status updates, checking automatically at 5, 10, 15, 30 or 60 minute intervals, is a nice touch.

That touch by the way… the one that notifies you at whatever interval with whatever method you choose even when the application is running only in the background… is unique to Android. Oh how right you are Facebook – Android really sucks. That feature isn’t cool, useful or helpful at all!

Many initial users complained that the application signed them out too often to enjoy it while others experienced no problem at all. But if you ask us, we give nothing but love to Next Mobile Web for initially filling the Facebook void left empty, purposefully, by Facebook themselves.

The iPhone and BlackBerry both have native Facebook Mobile Application that were developed with complete or partial assistance from Facebook themselves. But Microsoft is a Facebook partner whereas Google supports MySpace. And so the walled garden somehow, someway, finds a new way onto the Open Source mobile platform.

Unless an Android App gets some Facebook assistance, it’ll be impossible to create an application as robust and powerful as one natively built on the iPhone or a BlackBerry. Facebook can access their internal code and APIs that would, simply put, allow developers to unlock capabilities that a 3rd party developer couldn’t even approach by themselves.

But they can try… and they have. And you can guarantee that fBook won’t be the last FaceBook Application on the Android Market. So there you have it… despite what Facebook says about Android, their application is now on the market.

And just for the record, all you FaceBook execs need to get your head out of your asses and stop thinking you’re too good for anybody or anything or you’ll end up in the same position as Yahoo.