How To Monetize Your Android Applications

While it might be the most effective and profitable, developers might also view it as the most difficult, challenging and time consuming. It doesn’t have to me. While in NYC for the T-Mobile G1 event I sat down and talked with Rana Sobhany from Medialets whose company makes monetizing your Android Applications a piece of robot cake. 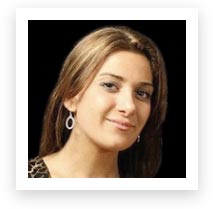 My first question was, “Why should developers trust Medialets?” There is a simple answer – they have PROVEN success in this very field. They help 20% (at time of writing) of all the iPhone App Store developers earn money from their applications without the complicated fuss of hunting down advertisers, negotiating deals or settling for pay-per-click mobile models that will likely yield a much smaller return.

So are they going to uglify your app with blinking banners that screw up the functionality and usability of your application and whore out your screen real estate? Not at all. YOUR app is the main show and Medialets incorporates non obtrusive advertising in strategic locations that in no way interferes with the usability of your masterpiece.

Suppose you made a killer scientific calculator. Perhaps Medialets would help you brand it with a sponsorship from a national bank chain… or maybe Texas Instruments? What if you made a game? The “leader board” would be a great place to incorporate an advertiser. Everything is a case-by-case basis and Medialets works with each Developer’s App individually to find the unique balance that will help your application meet perfection.

Android Developers are usually just that – developers. The way Rana spoke about her company made it seem like they were your very own Advertising Team for your application. Smart business people often outsource activities that don’t fall within their “key competencies” and many developers would LOVE to have someone handle the acquisition and negotiations with advertisers. But that word “outsource” sounds so unfriendly. I think they’d be more like a partner or team member.

So you’ve built this great application that you think SO many people are going to love and you upload it to the Android Market. Then what?

Then panic. Thats what a lot of developers will probably do. OH MY GOSH people are downloading my application and I could be making money from it what do I doooooo? Or worse… OH MY GOSH look how many downloads my application has *followed by staring/refreshing the download number all day*.

I promise you that there will be plenty of developers who launch their application and then go into total frenzy mode wondering what to do. Don’t say I didn’t warn you. Not only will Medialets help you work out the advertising and monetization of your Android Applications but they also incorporate advanced analytics services that can tell you a ridiculous amount of information about how your application is being used.

Many Android Developers will also have their application featured on the iPhone and comparing tracking across devices could be incredibly useful. Medialets does that too: 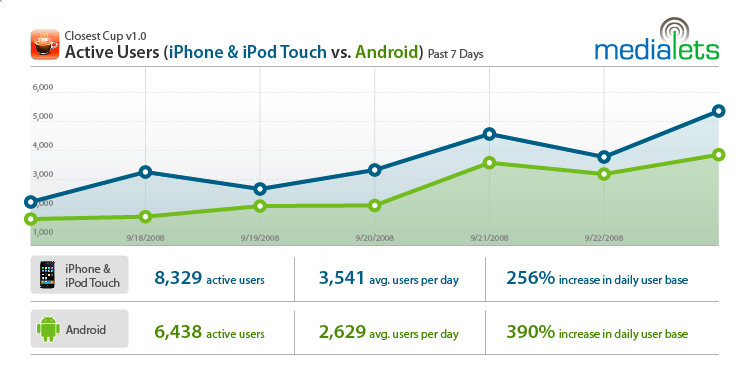 The above image outlines what one statistical comparison screen would look like for an application called Closest Cup. Its a real application that is pretty neat – it helps you find the closest store to fulfill your cup of coffee cravings. Being in NYC with a Starbucks every couple blocks could be really useful – why walk 3 blocks when there is one 2 doors down you didn’t know about?

I don’t think I really have to explain the benefits of Analytics but there is a key property here that is incredibly important. These analytics can be used to sell ad space on your application to potential advertisers which anybody in advertising knows is of CRUCIAL importance.

It doesn’t hurt that the founders of MediaLets have relationships and connections with some of the largest Advertising Agencies and Tech Companies in the world.

The icing on the robot cake is that the people at Medialets are geniunely nice people who want to see developers succeed. I had the pleasure of speaking with both Rana Sobhany (VP of Marketing) and Eric Litman (Chairman and CEO) and I’m sure you’ll find them as friendly and helpful as I did. For Android Developers, there is that added benefit of making loads of cash.

You can currently sign up for the Beta Program and I would recommend it. Don’t be one of the devlopers that hits the frenzied, emergency state… err, should I say, don’t be frenzieder or more emergenciedererer than the next developerer.