Less than 24 hours ago we pondered the differences between the inevitable Android Marketplace and the iPhone App Store. Now we’re getting the first official information from Google that the Android Market does exist and some juicy details on exactly what it will be. Get excited folks… this is a DOOZY!

While the definition is open to interpretation, it seems pretty cut and dry on the surface. The Android Market is “an open content distribution system that will help end users find, purchase, download and install various types of content on their Android-powered devices. The concept is simple: leverage Google’s expertise in infrastructure, search and relevance to connect users with content created by developers like you.”

Awesome… and it only gets better.

They chose the word “Market” rather than “Store” because they feel developers should have an UNOBSTRUCTED ENVIRONMENT TO MAKE THEIR CONTENT AVAILABLE. Read it and weep, Apple. As we had hoped, the spirit of openness is preserved with Android Market. Submitting applications will be as simple as creating a login, uploading your app and describing it.

Holy cow… is this heaven? Users will also be able to rate and review applications similar to YouTube. How will they be displayed.. by downloads? By featured? By rating? Will Google sell ad space for sponsored applications? All this remains to be seen but we are INCREDIBLY excited by the tone that Google is initially taking with the App Store. It sounds like Android will be everything that everyone is hoping! Afterall, its all about the applications.

The HTC Dream/G1 will ship with the beta Android Marketplace and only free apps will be available for download. Shortly after an updated version will be released that incorporates paid applications. Any type of profit/revenue sharing has gone unmentioned but details WILL be coming.

Here are some screen caps of the Android Market in action: 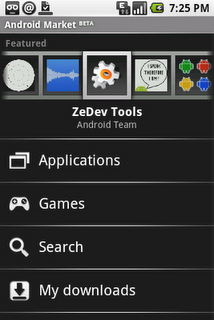 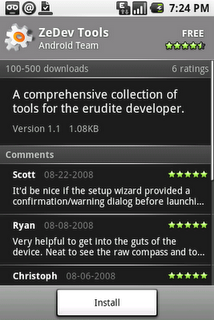 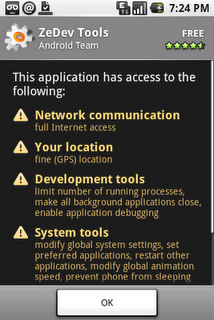 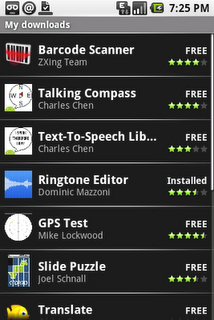 WOW everybody if you’re not getting INCREDIBLY EXCITED about Android THIS is your OFFICIAL CUE! The Android Market was one of the last things in question. We wondered in our last article whether carriers would suffocate the ideal Android Market and it looks like the answer is a resounding NO!

The wireless world better watch out… Android is coming. Stay glued to phandroid for all important updates and breaking info on the Android Market!