For those who use Google Messages with RCS enabled, one of the perks of having RCS turned on is that you get message indicators to show when a message has been delivered and when it has been read, similar to what you might expect from messenger apps and services.

Currently, Google uses the words “Delivered” when a message has been delivered, and “Read” when a delivered message has been opened and read, but as noted by 9to5Google, it seems that the company is testing out a different way of displaying those indicators by using checkmarks.

It will follow in the footsteps of other messenger apps like Signal and Telegram where a single checkmark denotes that a message has been sent, and a double checkmark to indicate when the message has been read. According to the publication, they speculate that the possible change of the indicators is to reduce the amount of visual information which could make it look less cluttered.

While we can see the merits in that, checkmarks are less obvious compared to actual words, meaning that it is possible that in some cases, people might not be familiar with the concept. For example, when WhatsApp first rolled out the double blue checkmarks to indicate a message was read, people were confused because they thought that the double checks meant that a message was read.

Either way, this is currently a test so there’s no saying if Google intends to make the changes permanent or if they’re simply seeking feedback. 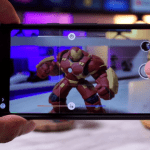