Samsung Galaxy Fold 4 review: still not sold on the Fold

Tech enthusiasts have been looking for the next big thing in the smartphone space for quite some time. Some claim it’s VR/AR and others say it’s a new era of foldable displays that will enable new and exciting form factors. Both of those could turn out to be what drive tech innovations for the next decade or two, but after using the Samsung Galaxy Z Fold 4 every day for more than a month, I’m still not convinced that Samsung’s large foldable is a device I want to use now or in the future.

The new Galaxy Z Fold 4 may be appealing to anyone who’s just now getting into foldable, but if you’re using last year’s model, there’s really not much in terms of upgrades that make this new device more appealing than its predecessor.

I want to make sure I start things off with the positives. While this phone isn’t the perfect fit for my needs, there are still quite a few things that are great about the phone. 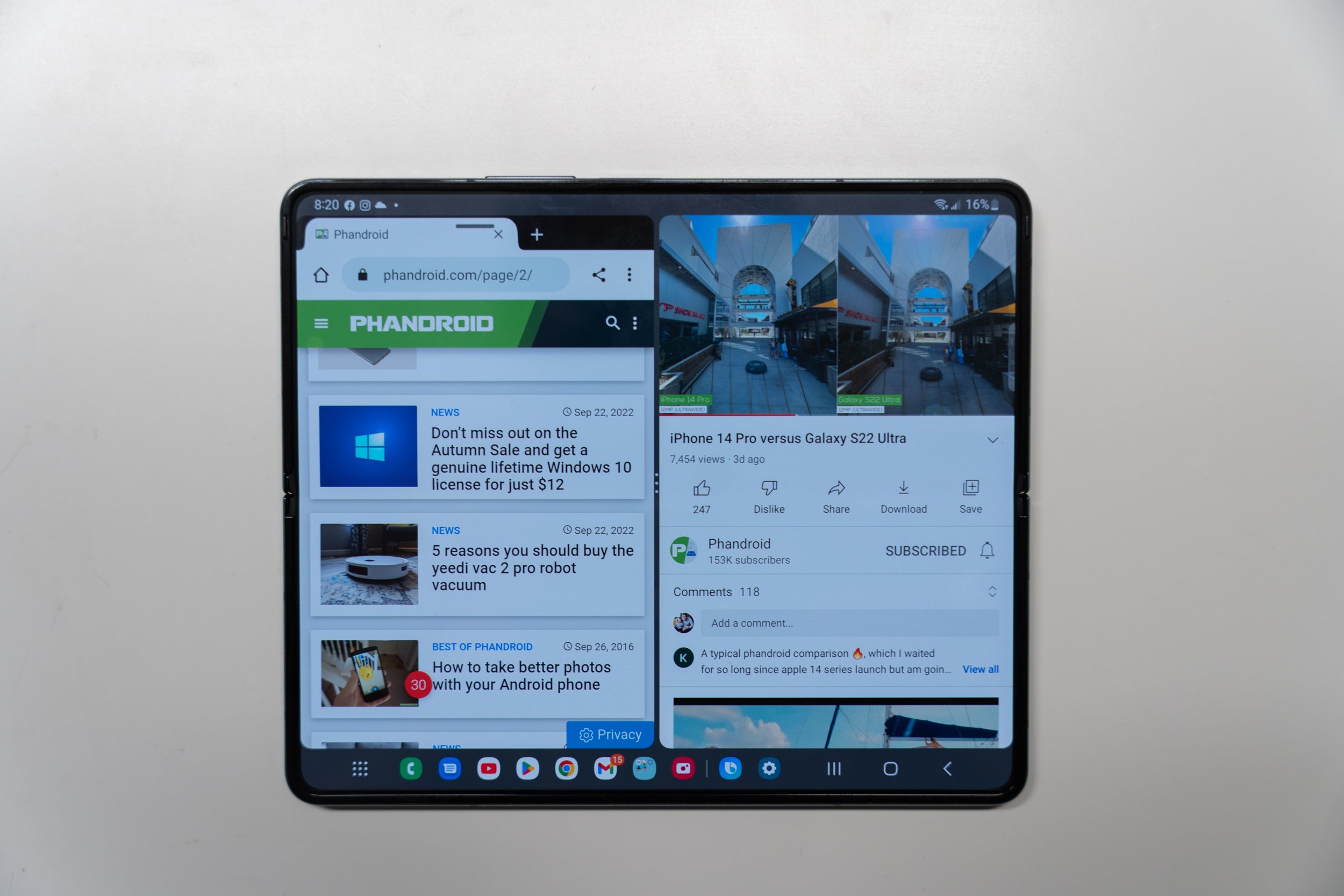 There’s no denying that the main appeal of the Galaxy Fold 4 is its 7.6-inch foldable display that can be folded in half so that the phone still fits in your pocket. Yes, there are plenty of phones that get close to the 7-inch mark, but 7.6-inches delivers substantially more room for your apps and makes multi-tasking significantly more enjoyable with full-sized apps laid out side-by-side, just as the developer intended. Watching YouTube or Netflix on one side while scrolling through Twitter or browsing the web on the other side is something I’m sure everyone will love.

I’ve always been a fan of smaller devices, but I do enjoy the extra screen real estate, especially since there’s plenty of room to arrange the homescreen with multiple widgets and all your favorite apps. I try to do the same on traditional slab smartphones, but there’s never really enough space to get things just right. 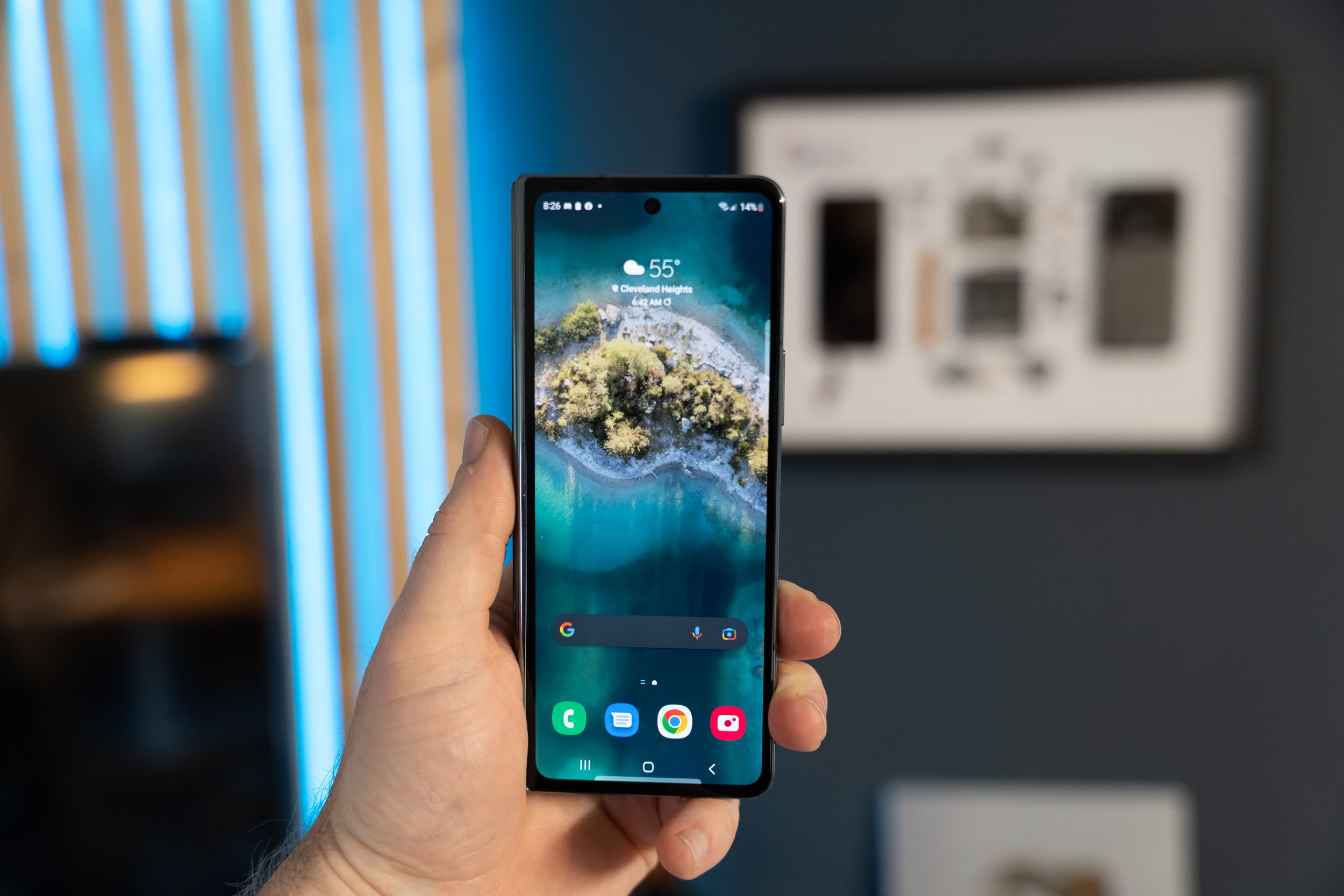 When it comes to performance, the Galaxy Z Fold 4 comes with Qualcomm’s top-of-the-line Snapdragong 8+ Gen 1. When it comes to Android, this is the best you can get right now and will likely stay that way until early next year. Compared to the Fold 3, the new device delivers roughly a 35% improvement in performance across the board while delivering better overall power efficiency.

The phone still gets warm to the touch and will throttle when playing games like Genshin Impact or Fortnite, but it definitely manages to deliver higher frame rates, making the gaming experience more enjoyable.

There are plenty of devices with 12GB of RAM these days, but the Fold 4 is one of the few that actually puts it all to good use. As mentioned already, multi-tasking on this phone is quite enjoyable thanks to the large display. I never once felt the device slowing down while using three apps at a time. The phone simply works as you’d expect it to.

Samsung’s flagship smartphones have been pretty good when it comes to its cameras over the past few years. The Fold 4 is no exception, thanks to its new 50MP primary camera that delivers a noticeable improvement over last year’s model with better low light performance and improved dynamic range. The phone also has a new 66mm 3x telephoto camera, up from the 2x telephoto Samsung used on last year’s Fold 3.

Overall, the camera manages to capture pretty impressive photos and videos. They have that usual Samsung look to them, but you can always tweak the settings on your own in pro mode if you want full control or simply want something that looks a bit different.

What truly makes the Fold 4 more versatile than the competition is its unique folding form factor. The Fold 4 can act as its own tripod when the screen is folded halfway, but thanks to the phone’s cover display, you can use the main cameras on the back of the phone for selfies, making this one of the best phones for vloggers or anyone who simply wants the best selfies a smartphone can take.

Taking selfies with the main camera can be a bit awkward at first, but you quickly get a hang of it. That being said, you will get some odd looks from those around you since you’re essentially taking selfies from a tablet-sized device. 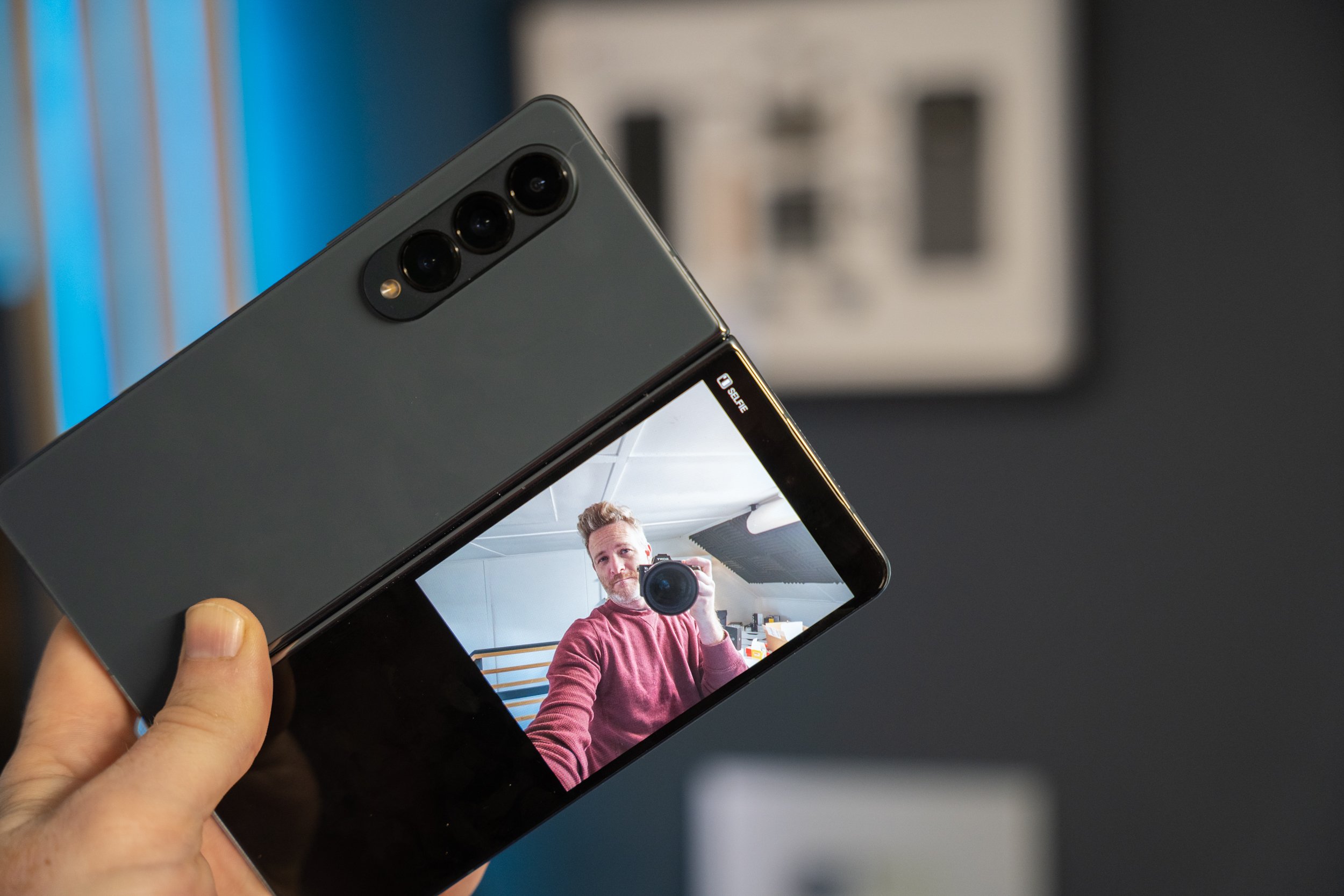 The basic software experience of the Fold 4 is pretty similar to that of the Fold 3, but Samsung’s added one new feature that makes the phone feel more versatile. Like a Windows device, Samsung’s large-screen foldable now displays the most recent apps you’ve used at the bottom of the screen in a dock. This makes it extremely easy and quite a bit more intuitive to switch back and forth between apps.

Having the apps in the dock also makes side-by-side multitasking quite a bit easier as well since you now can simply long-press any app icon that’s in the dock and drag it to one side of the screen.

While Samsung and other OEMs are always looking or new ways for users to interact with apps on our smartphones, sometimes the tried and true design elements that have been around for years delivering the best user experience.

There’s definitely a lot to like about the Samsung Galaxy Z Fold 4, but it’s also riddled with flaws, forcing users to make compromises that they shouldn’t need to make when buying an $1800 smartphone. 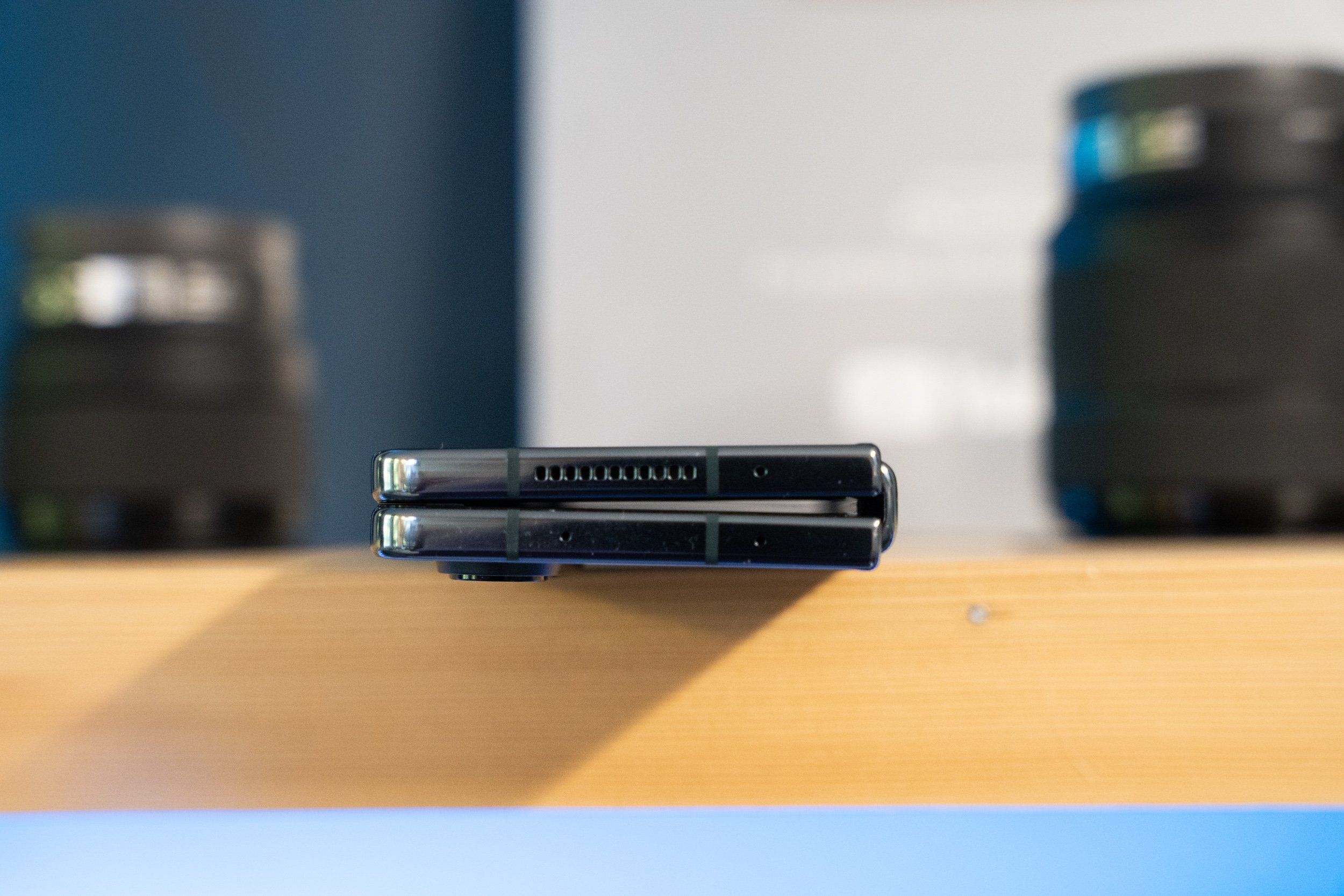 Anyone looking to buy a foldable smartphone knows that they’ll be getting a larger display when the device is unfolded. To make the phone as sleek as possible, Samsung’s tried to shave off fractions of a millimeter around the display to make the bezels thinner, but this phone isn’t noticeably slimmer than its predecessor.

Compared to the competition, the Fold 4 is the bulkiest foldable smartphone on the market. When folded, it’s essentially as thick as two smartphones and gets even bigger when you put a case on it. 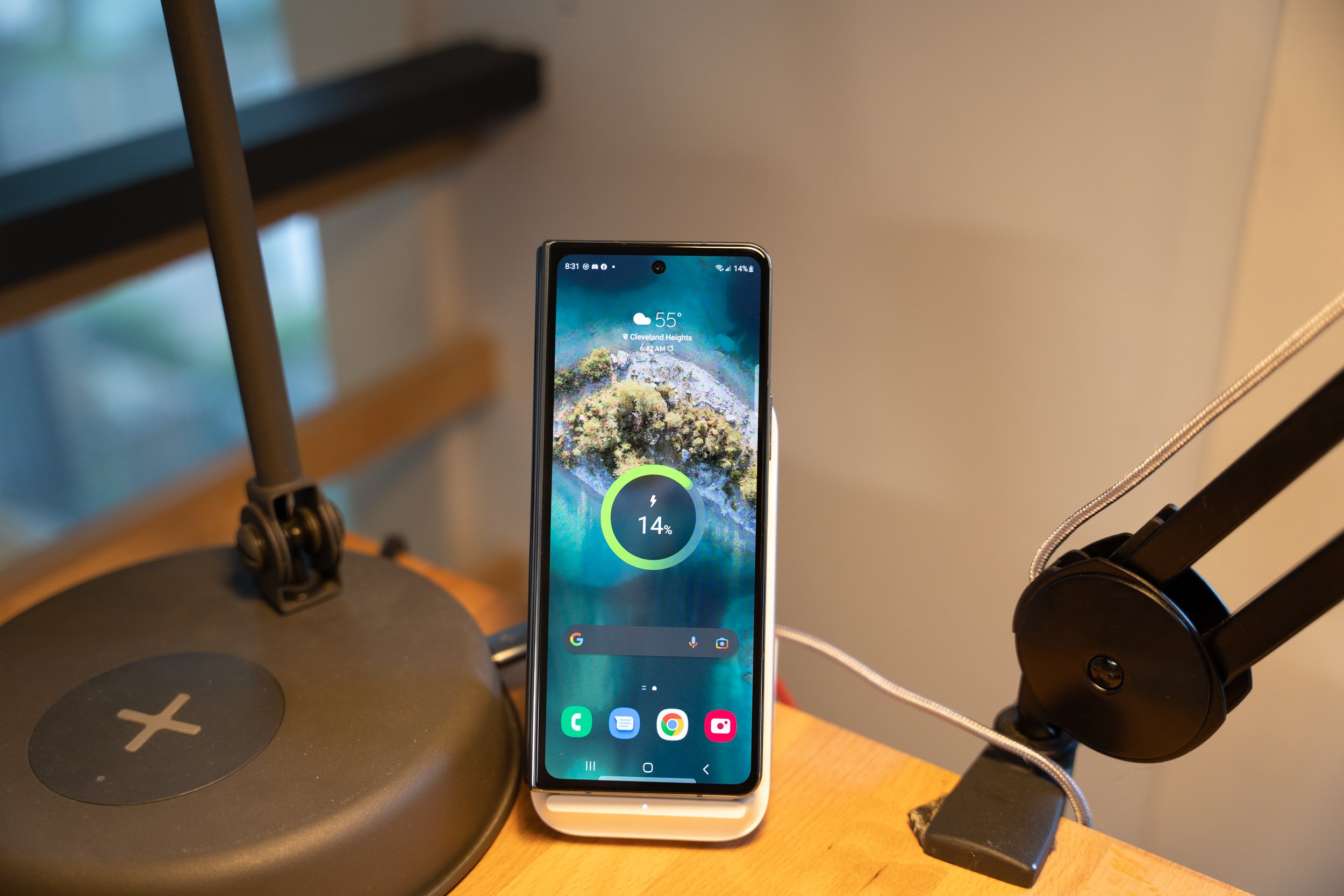 If I handed you a flagship-tier smartphone with the latest and greatest chipset, a 6.8-inch display and told you it was the best device on the market for multi-tasking, you’d expect the phone to have at least a 5,000 mAh battery to keep it running from sun up to late in the evening. Unfortunately, that’s not even close to what Samsung delivered with the Fold 4.

The smartphone comes with a 4,400 mAh battery, which hasn’t once been enough to get me through a full day before needing to be topped off. For how much bulky the phone is, it’s surprising that they haven’t been able to fit it in a larger battery well.

And to add insult to injury, Samsung’s still sticking with the slowest charging speeds possible for a flagship smartphone at just 25W, taking 1 hour and 25 minutes to charge from zero to 100%.

The crease is still here 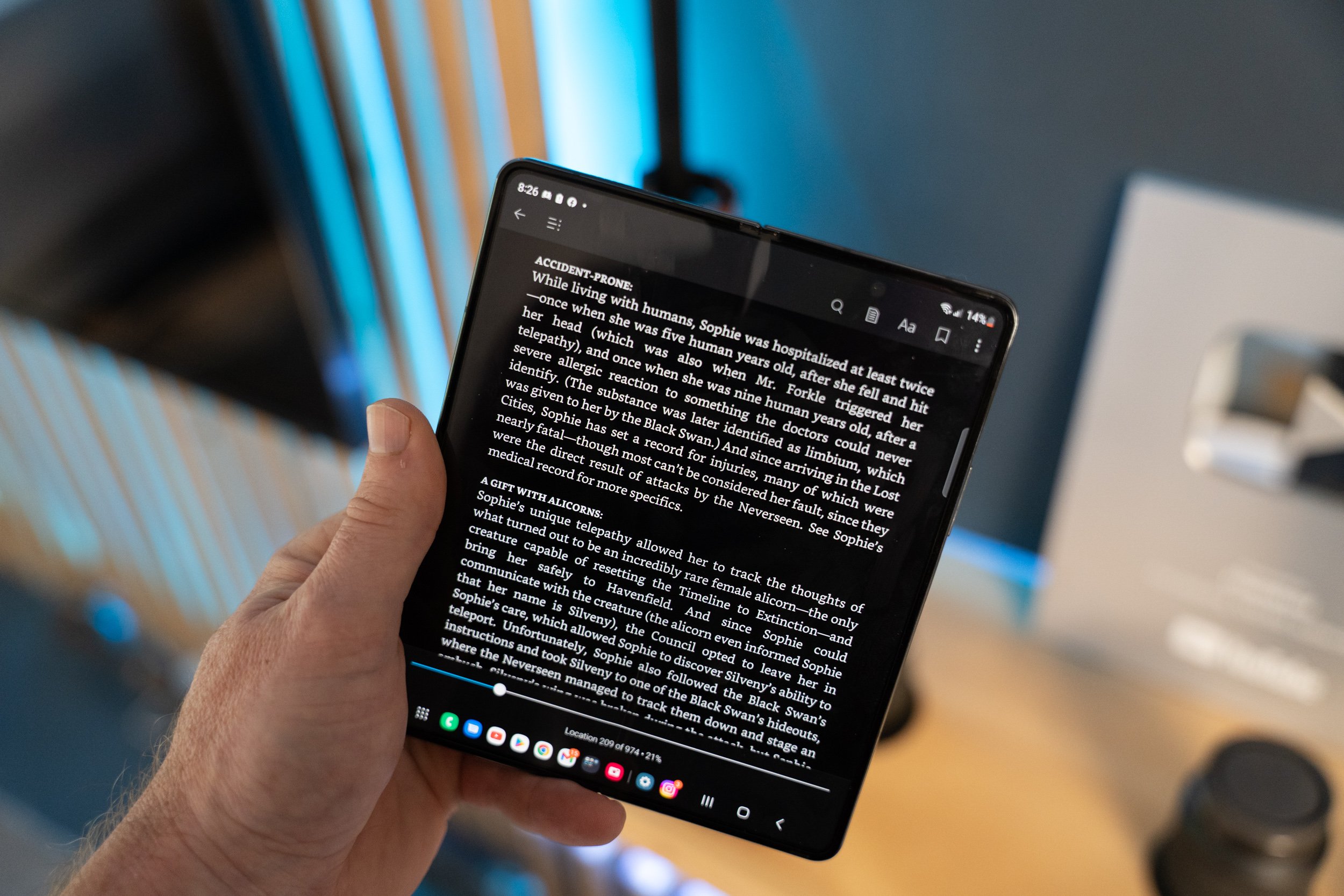 It’ll likely be another 3-5 years until we get to the point where the crease on a foldable smartphone’s display is a thing of the past, but it doesn’t look like Samsung is making any progress at all. Other manufacturers are using a teardrop design to ensure that the radius of the fold on their devices is as large as possible, but Samsung is still using the same exact approach that we’ve seen from them since the original Galaxy Z Fold.

This means that the crease is still as prominent as ever and is the first thing anyone points out when they use the phone for the first time. At certain angles, the crease is hard to spot, but you can definitely still feel it every time your finger slides over the middle of the display.

Not changing the way the flexible display folds is also one of the reasons why the phone is noticeably larger than the competition. Samsung is still only of the only foldable smartphones to feature a noticeable gap between the two halves of the phone when it’s folded. This also means that you still get quite a bit of pocket or purse lint and dirt between the display. 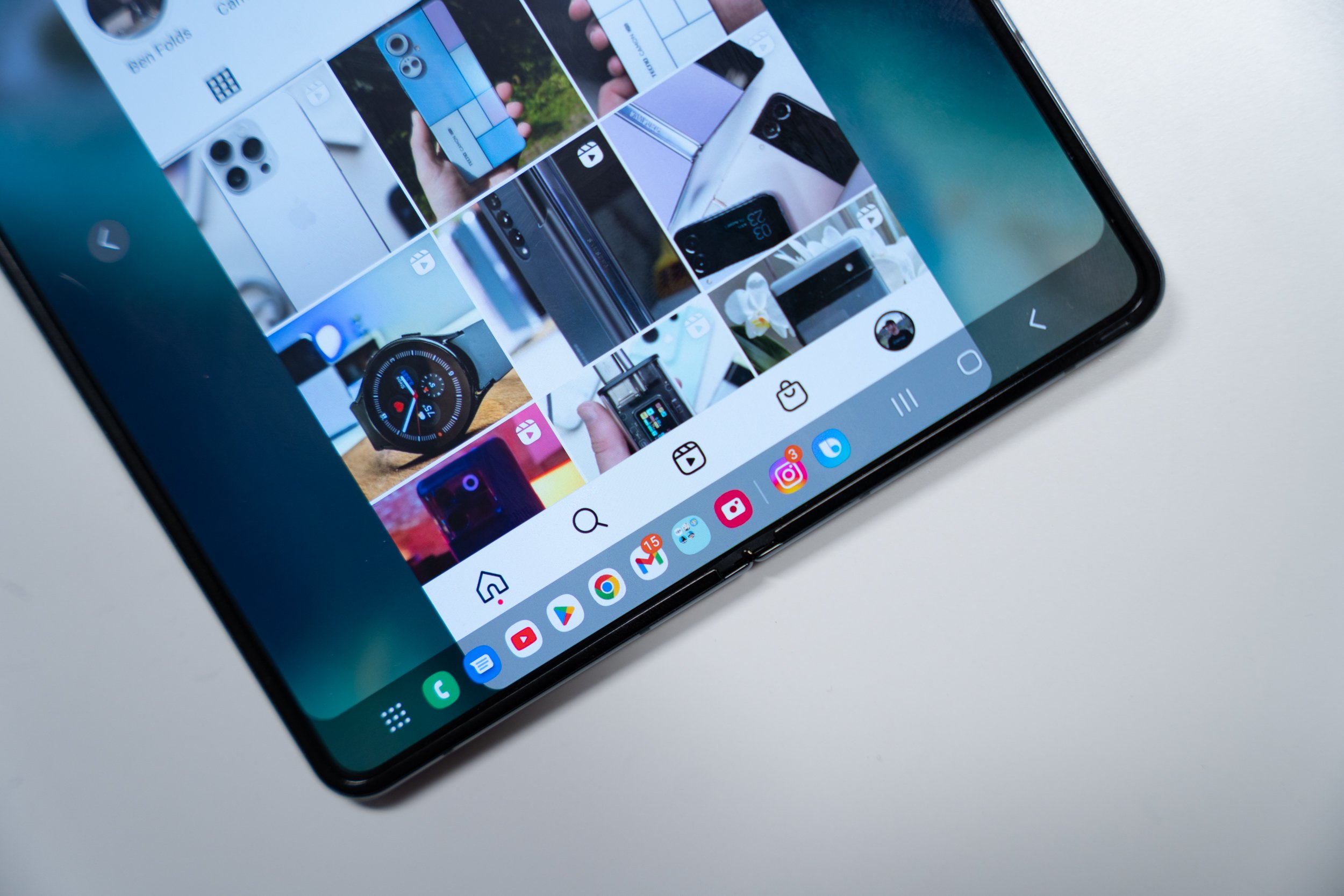 Every time Samsung announced a new foldable smartphone they like to show off one or two new apps that have been optimized for the unique form factor. Those apps usually have some cool new tricks that can be used on the foldable, but they are usually the only apps in the past year that have added foldable device support.

Simply put, Android app developers don’t really care if you own a foldable smartphone. Apps usually just open full screen and take up the entire display, just as they would on any other device. If an app has been optimized for a tablet, you might get lucky if the developer allows for an alternate UI experience based on the Fold 4’s screen size.

But then there are apps, like Instagram, that simply refuse to conform to the large screen. For these apps, Samsung gives you the option to display the app right in the middle or bump it over the left or right edge of the screen so that it’s easier to interact with one-handed, but it still feels like an ugly bandaid that won’t be removed any time soon.

There’s no denying that foldables are the most innovative segment in the smartphone space. The foldable displays allow Samsung and other manufacturers to deliver new form factors that make these devices more useful.

Unfortunately, I don’t think the Galaxy Z Fold 4 moved the needle forward. Sure, it’s more powerful and has better cameras, but Samsung didn’t offer any meaningful improvements to the main feature of the phone.

If you already own the Galaxy S Fold 2 or last year’s Fold 3, there’s really no reason to upgrade. Personally, I think Samsung’s new Flip 4 does a better job at showing off the foldable display technology while also bringing back the classic flip phone design that we all know and love.

There’s nothing really wrong with the Samsung Galaxy Z Fold 4. I just don’t think it’s as interesting as its size and price make it out to be.