Prior to the launch of the Samsung Galaxy Z Flip 4, the company offered users $200 in Samsung Credit if they were to reserve the phone. On launch day itself, Samsung continued their promotions where they also offered users up to $900 in trade-in value for an eligible handset.

One handset that was eligible for the trade-in is the Galaxy Z Flip 3, the Flip 4’s predecessor where users could get $900 for the phone. This essentially meant that they would pay little to nothing to get their hands on the brand new Flip 4, but if you have yet to pull the trigger, it looks like that will no longer be the case for some models. 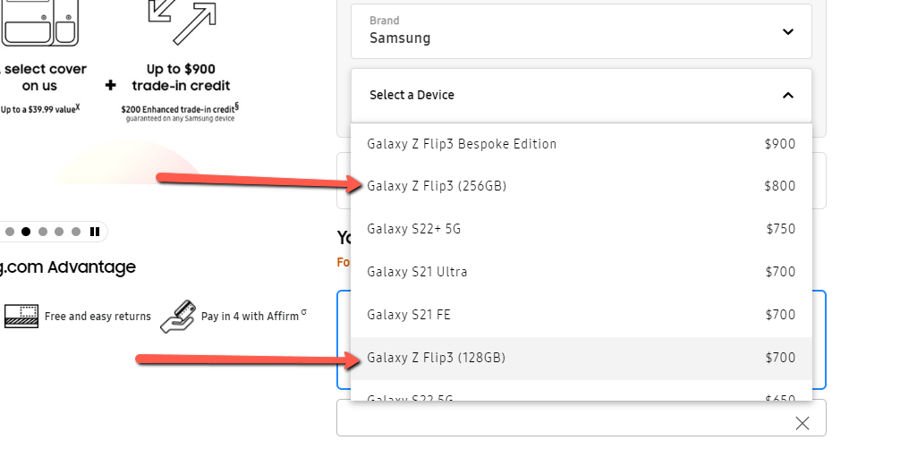 According to 9to5Google, it appears that Samsung has quietly lowered the trade-in value for the base 128GB Galaxy Z Flip 3. Prior to this, there was only one option for trading in the Flip 3 and it would have netted users $900 regardless. Now there are two options – 128GB and 256GB, where only the 256GB model will get you $800 in trade-in value.

Of course, given that the 256GB model is more expensive than the 128GB model, ultimately you would still end up paying more than if you had traded in your phone last week. The good news is that according to some users, those who had already pre-ordered their phones with the trade-in are still getting $900 for it, meaning that these changes will only affect future customers.

In any case, it’s still a relatively good deal since it is still cheaper than buying the phone outright. If you’re interested, head on over to Samsung’s website for the details.