Diablo Immortal was released not too long ago, and if you’re a fan of the game/series, it looks like over in South Korea, Samsung has unveiled a special edition version of the Galaxy S22 Ultra in collaboration with Spigen and LG U+ (a local carrier in South Korea).

In order to get your hands on the phone, customers will need to tune into LG U+ livestreams which will take place nightly from the 10-16th of June, and during the streams, users will stand a chance to win a ticket that will let them buy the phone, essentially making this like a raffle of sorts. 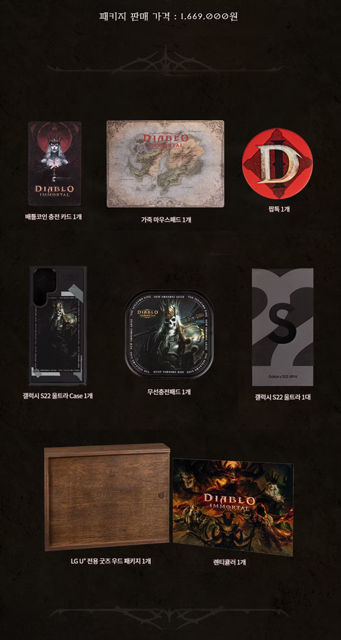 There will only be 100 tickets available in total, but for those lucky enough to win, the entire package is priced at around $1,300. In the package, it will contain the battle pass for the game, a leather mouse pad featuring a map of the in-game world, a lenticular print, and some Spigen accessories like a bumper case, wireless charging pad, and a pop-out socket girp.

The phone will also be included, of course, and will come with a special wooden box with a slideout cover. It’s not the cheapest bundle we’ve seen, but if you want to own something that’s extremely limited, this is your chance. We’re not sure if there are plans to host similar raffles in other markets, but for now it looks like it’s only available to those living in South Korea.