There are many things that can affect the battery life of our smartphones. There is obviously the size of the battery itself, then the chipset, and the display, all of which have been tinkered on over the years to make them more efficient than ever. But did you know that the type of storage your phone uses can affect battery life as well?

That’s something that Samsung is promising to address as the company has unveiled its latest UFS 4.0 flash storage system for smartphones. According to Samsung, UFS 4.0 offers sequential read speeds of 6MB/s per milliampere, which apparently makes it 46% more power efficient compared to UFS 3.1 which is the current standard.

BREAKING: Samsung has developed the industry's highest performing Universal Flash Storage (UFS) 4.0 storage solution, which has received JEDEC® board of director approval. What is UFS 4.0 and what does it mean for the future of storage? Read on to learn more. pic.twitter.com/4Wxdu0J2PD

The new flash storage system is also capable of providing speeds of up to 23.2Gbps per lane, essentially doubling up what UFS 3.1 is offering. All of this is expected to result in phones that can not only read and write data much faster, but will also be more power efficient at doing so.

Given that more phones are becoming 5G capable, and with faster download speeds, users will be downloading and streaming content more than ever, so having a more powerful flash storage system will come in handy. According to Samsung, mass production of the new UFS 4.0 system is expected to take place in Q3 2022, which means that the Samsung Galaxy S23, which is pegged for 2023, will most likely be the first Samsung phone that will be taking advantage of it. 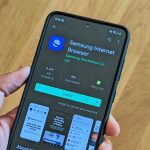