Do you have an Android Auto car stereo, but wish it could fulfill more of your infotainment needs? Depending on your car, your car could have come with a pretty high-end infotainment system, or it could come with a simple radio setup. If you have a vehicle that comes with a nice display for the infotainment system that you want to leverage and take it further, then perhaps the CarPC AADongle is exactly what you’re looking for.

We know that there are head units designed for cars that offer up systems like Android Auto, but this usually means having to spend extra money upgrading, and in some cases, it might even void the warranty of your vehicle if you’re purchasing it separately and not from the car manufacturer themselves.

Not to mention, you’d have to pay someone to install it for you which in itself is another cost, especially if you’re not a particularly tech-savvy kind of person, but those are some of the pains that CarPC is hoping to solve by turning your radio system into an Android PC of sorts.

One of the selling points of CarPC AADongle is that it is incredibly small. It is essentially around the size of a USB flash drive which means that you won’t have to waste time trying to figure out if there is enough space in your vehicle to install it. But don’t let its diminutive nature fool you because, under the hood, the CarPC AADongle packs quite a punch.

The little dongle features an A53 octa-core chipset and will also come with as much as 4GB of RAM and 64GB of storage. Sure, it isn’t as powerful as a flagship Android smartphone, but considering the size and what you want it to do, it has more than enough power to do everything you need.

The creators have also included dual MEMS microphones so that if you need to use it with digital assistants like Google Assistant, or if you want to use it to make calls, the microphones will be able to help with that, no additional hardware required.

As we said earlier, one of the drawbacks of replacing the infotainment system in your car is that it can be a complicated process. It’s either you figure out how to do it yourself, or pay a professional to do it for you, which is an extra cost on top of purchasing the system. With CarPC AADongle, as you can see in the photo, it’s quite literally plug and play.

AADongle will be able to interface with your car by plugging it into your car’s USB slot, something that actually many modern vehicles come with single USB slots that allow users to attach flash drives for music playback. This means that if you already have a USB slot in your car, all you need to do is plug it in and you’re all set.

It is so incredibly easy to install that even a child could do it, so as long as you’ve ever plugged in a USB device to a computer before, then this is pretty much a no-brainer. 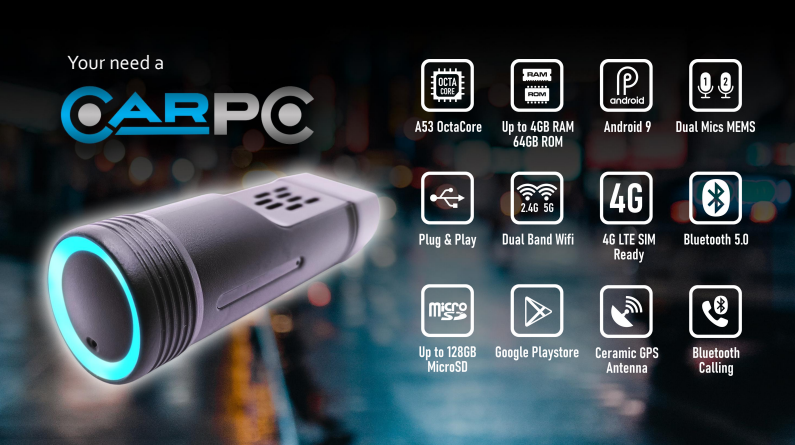 Now, what good is a modern-day infotainment system if it does not offer connectivity features, right? With the AADongle it supports 4G LTE connectivity if you choose to insert a SIM card into it. It also supports dual-band WiFi, so whether you want to use your smartphone as a WiFi hotspot or purchase a dedicated data plan just for AADongle, either way, you’ll be able to get online.

Since at its core, the CarPC AADongleis powered by Google’s Android platform, this also means that you’ll be able to access the Play Store. From there, you’ll be able to download all kinds of apps to your vehicle. Granted, there are some apps that aren’t necessarily designed to be used in cars, but at least you’ll have options.

For example, if you’re not a fan of your car’s radio system and want to be able to stream songs from Pandora, Deezer, Spotify, or Apple Music, just search for the app in the Play Store, download it, and you’re off to the races! You’ll also be able to search for and download your favorite navigation apps if you don’t like the one that came preinstalled in your vehicle, plus with WiFi and LTE connectivity, you’ll be able to get up-to-date traffic information and more.

Gaming in your car

In addition to installing apps, CarPC AADongle also allows you to install thousands of games and emulators directly from the Google Play Store. Playing games directly on the touch screen can be a bit difficult but you can connect a Bluetooth controller which will make gaming a lot more enjoyable.