When it comes to smart home lighting, this feels like the coolest thing ever, besides having a computer in your pocket all day long. Being able to activate Google Assistant, or Alexa, or even Siri and tell it to turn your lights on or off is the ultimate practice in laziness and convenience. But things are taken to the next level when it comes this Immersion Kit from Govee. 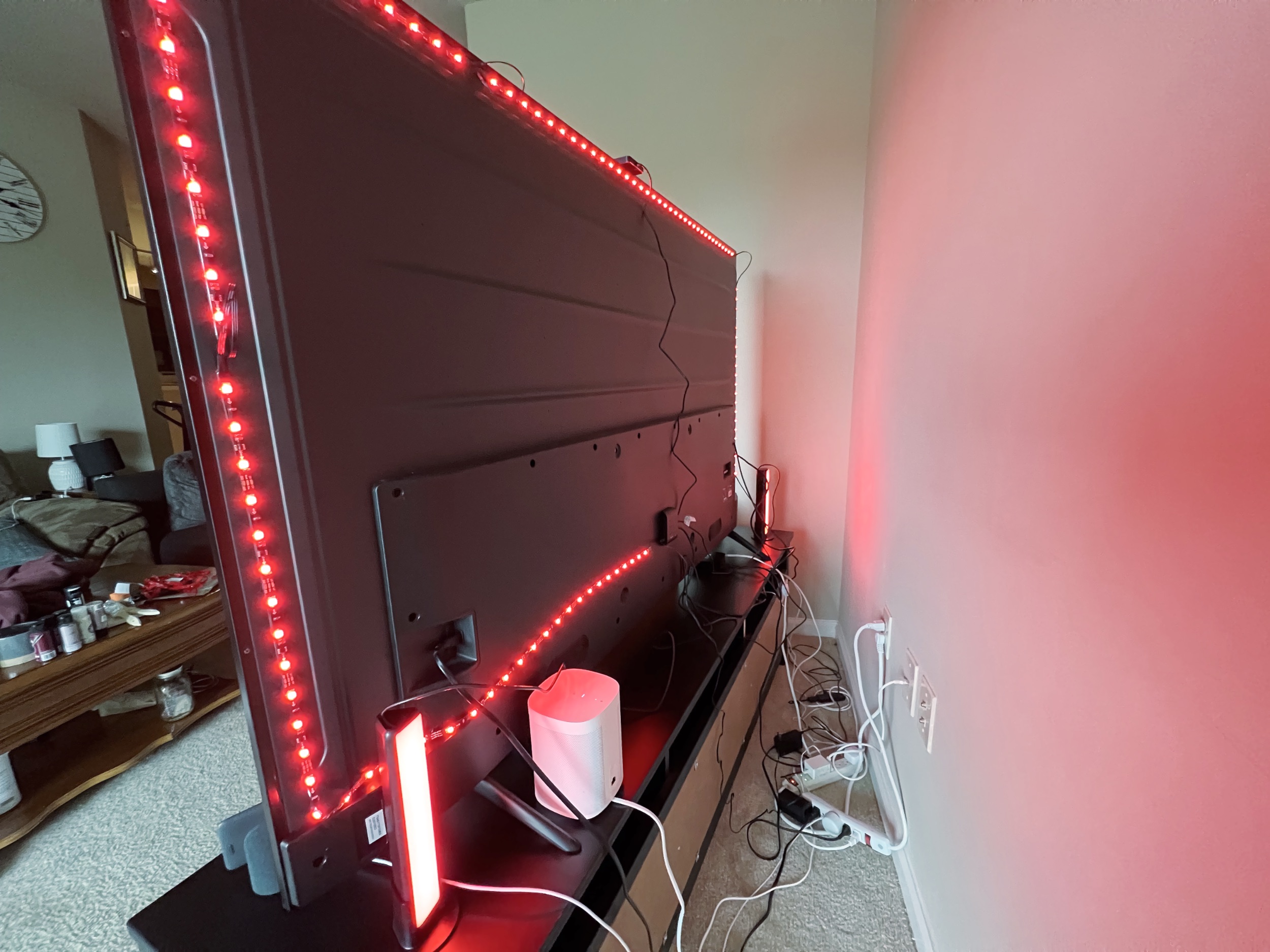 The entire kit includes two light bars, a control module, an RGB light strip, a camera (more on that), and everything you need to get the kit set up. Installing all of the lights is pretty simple, as you simply unpeeled the adhesive covering, and place the light strip around the edges of the back of your television. The light bars can be mounted to the wall, but I just used the two included stands as I didn’t want to drill anymore holes into the walls of my apartment. Then, with the camera, you can place that at either the top or the bottom of the TV, and it too, uses adhesive to stay in place.

Once everything was in place and connected to the control module, it was time to get everything synced with the Govee app. At first glance, the app may seem a bit daunting, but that just shows that Govee has implemented quite a few features into the app in order to provide you a pretty awesome experience. Given that this is my first time using Govee products, I was a bit overwhelmed at first, but after a few minutes of tinkering around with the app, that feeling went away. To get the full “smart home control” experience, you’ll want to make sure you link the Govee app to Google Home, but it also works with Amazon Alexa if that’s your preferred digital assistant.

Going back to the initial setup process, I found myself confused as to why I needed to put these (included) little orange squares on the corners and edges of my TV. As it turns out, this is to help the camera recognize the entire width of the TV in order to make sure all of the lights match up according to what you’re watching. The only trouble I ran into is that the 1080p camera is not a wide-angle one, so I wasn’t able to even view the orange squares in the corners. But that’s what you get when you’re using a 75-inch TV.

Once that’s done, it’s time to start tinkering with the Govee app. I’m not going to spend too much time on this, as it’s just another app to control your lights. But it was pretty cool to see that the control module allows for you to have the lights synced to the music you’re playing. This resulted in the lights bumping and hopping around to the beat, which would be great if we were to ever have a party.

But the real reason why I wanted to try out this immersion kit was for movie nights. My fiancé and I have a tendency of unwinding on the couch with a movie, even if it’s one that we’ve seen a million times. For this instance, we went a different route, as we opted to go with a “date night” routine and find a movie that neither of us have seen. Since we both are big fans of the Marvel universe, we were both long overdue in watching Black Widow, so that’s what we fired up.

With all of the rest of the lights in the apartment turned off, I fired up my Apple TV (don’t judge) and was immediately blown away. With the HBO Max app selected, the lights turned purple to match. Moving over to Plex, and the lights were a mix of red, blue, and purple. And highlighting Netflix turned all of the lights red in an instant. While the fiancé was making some popcorn, I fired up Avengers: Endgame just to see what fight scenes looked like with this Immersion Kit in action.

Being the techie-nerd that I am, there are some things that I show my fiancé and just get an eye roll in response. But as soon as we started the movie, she was immediately enthralled. Watching the movie and seeing the lights change around as the scenes change, really made it feel like we were actually in a movie theater, and not just sitting in the living room of our apartment.

If I had a single complaint, it’s not even necessarily Govee’s fault. I’m sure that having a TV smaller than 75-inches would result in a proper experience. However, there were more than a few scenes where it was obvious that the camera couldn’t pick everything up that was happening on the screen. This resulted in some of the lights simply being an off-white color, while the rest of the lights matched up with what was on the screen. Other than that, and having a camera planted on the top of my television, the Govee Immersion Kit is something that everyone should check out.

The Govee Immersion Kit is absolutely incredible if you want a smart lighting kit that can be controlled with Assistant or Alexa. It turns your living room into a movie theater, even if the process is a bit more involved than you might like.