Back in August, a new rumor cropped up suggesting that the OnePlus 9 RT was in the works, which is a successor to the OnePlus 9R. Instead of offering a second flagship handset in the 2nd half of the year, this device is likely to be positioned in the mid-range market. Since the initial report, we’ve seen a few rumblings here and there, but now, we have a better idea as to when the 9 RT will be released.

According to @OnLeaks, the OnePlus 9 RT is “tentatively” set to be unveiled on October 15th.

Not much else is really known about the device just yet, except for a few key specs and the fact that it will likely retain a design similar to that of the standard OnePlus 9. In terms of specs, we’re expecting to see the device powered by the Qualcomm Snapdragon 870 chipset, while sporting a 6.55-inch 1080p display. OnePlus will be including a fast 120Hz refresh rate, which is a bit surprising, although we expect that the display won’t be the same one found on the OnePlus 9 Pro.

Other expected specs include a 4,500mAh battery complete with 65W fast charging speeds. The main camera is said to be Sony’s 50MP IMX766, which is the same camera found in the OnePlus Nord 2. Finally, the Snapdragon 870 will likely be paired with between 8GB and 12GB of RAM and either 128GB or 256GB of onboard storage.

In terms of availability, those here in the US hoping for another great device for OnePlus will have to keep waiting. Instead, the OnePlus 9 RT is set to be released in India and China at launch, meaning that those in North America and other regions won’t be able to get their hands on one without importing it. 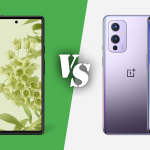