It actually happened: Xiaomi has dethroned Samsung as the largest smartphone brand in the world

According to the report, the change in market share actually occurred in June of this year, as Xiaomi grew to 17.1% market share, while Samsung dropped to 15.7% and Apple came in third with 14.3%. Month-over-month, Xiaomi saw sales increase by 26%, showing that it’s also the “fastest-growing brand for the month”. The report also revealed that as of Q2 2021, Xiaomi has sold almost 800 million smartphones since the company was formed all the way back in 2011. 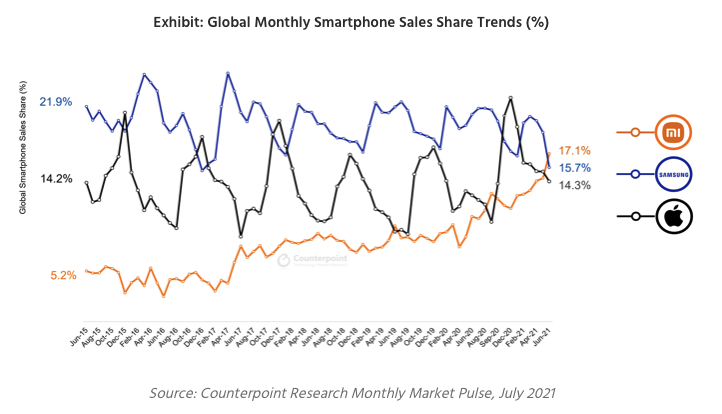 Although this is just one report from one research company, Counterpoint is one of the leading research firms in the world. So while you might think to take these figures with a grain of salt, it’s clear that Xiaomi is on the up-swing, while both Samsung and Apple have been taken down a notch.

Xiaomi has been on an upwards trajectory for the past year or so, only really seeing a steep decline back in April of 2020. With the release of the Xiaomi Mi 11 series, along with the different Poco phones, and the enormous lineup of Redmi devices, Xiaomi is hitting all the right notes at the right time.

Considering that Samsung hasn’t released a flagship handset since January, and Unpacked planned for next week, we could see a flip-flop between the two companies. But at the same time, Xiaomi has an event planned for the day before Unpacked where it will be unveiling the all-new Xiaomi Mi Mix 4. We have also seen reports that the company is working on another foldable phone, and perhaps this one will make it to more markets than just China.

This is the first time that Xiaomi has ever been even projected to be the #1 smartphone brand in the world, and it’s truthfully pretty impressive. Especially when you consider that the company practically has no base here in the U.S., with its primary focus set on the rest of the global markets.

While I’m ecstatic to see Xiaomi rise to the top, I’m going to keep my fingers crossed that the company eventually makes its way into the U.S. market. I mean who wouldn’t want to use something like the Mi 11 Ultra without having to deal with import fees and all?