Forget everything that we’ve seen before today. In the past two days alone, we’ve learned more about Samsung’s upcoming products, including seeing high-resolution renders and specs. Here’s a breakdown of everything that has been leaked ahead of next week’s Unpacked event.

Of course, the headlining announcement will be for Samsung’s next lineup of foldable phones in the Galaxy Z Fold 3 and Z Flip 3. These devices have been steadily leaked over the past few months, but now, there’s really not much that we don’t know about them. 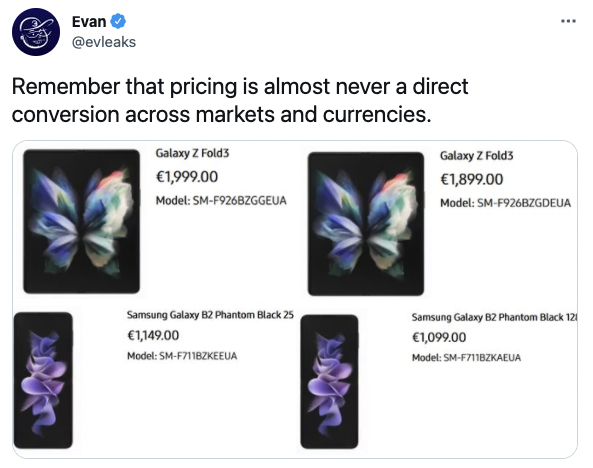 Blass points out the obvious, stating that European pricing usually does not directly translate to other markets. So while it may be €1999 in Europe, that doesn’t mean it will be more than $2300 here in the U.S. Instead, we expect the $1,999 figure to be used in different regions, where possible.

Samsung kind of did this one to itself, as the company confirmed the development of a new S Pen designed specifically for foldable phones. Bringing S Pen support to the Z Fold 3 has been expected, especially after the Galaxy Note 21 was canceled and the S21 Ultra introduced the functionality. The Galaxy Z Flip 3 is not expected to feature S Pen support.

On Sunday, we got a glimpse of the Galaxy Watch 4 Classic in some leaked real-world images. Blass provided us with all of the hi-res renders that we could want, showing off every color, the different bands, and the “stock” watch faces that will be used when the smartwatches hit digital storefronts. 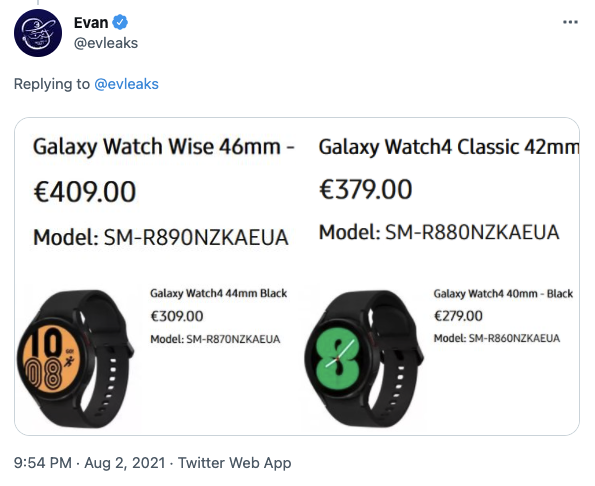 As is the case with everything else here, European pricing is not exactly indicative of what these will be available for in other markets. But we can surmise that it will be pretty close to the numbers, not the converted amount.

By this point, it’s pretty clear that the Galaxy Buds 2 will replace the Galaxy Buds+ in Samsung’s earbud lineup. The Galaxy Buds Pro is expected to remain atop the mountain, competing against the WF-1000XM4s and AirPods Pro of the world. Meanwhile, the Buds 2 will arrive in two fun colors, while retaining pretty much the same design as the Buds Pro. 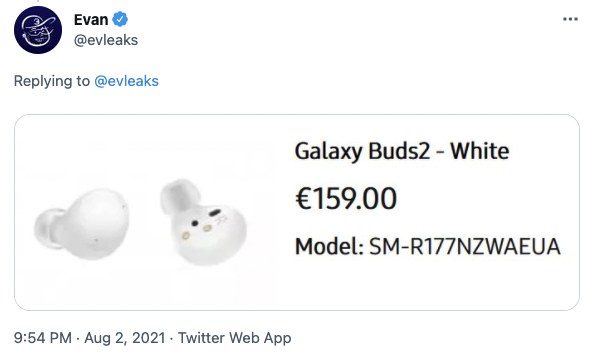 Pricing for the Buds 2 is pretty much par for the course, as these aren’t going to be priced more than the Buds Pro (before any discounts). As for capabilities and features, @_snoopytech_ is back with that information.

It will be interesting to see if Samsung tones back the ANC levels here, but even still, including it is a nice addition.