If you were to ask us, HarmonyOS looks like a compelling tertiary option behind Apple’s iOS and Google’s Android. Huawei is pushing the bounds of what it can do with this fork of Android, attempting to implement one of the most cohesive networks for your Huawei devices that we’ve ever seen. However, if Huawei really wants HarmonyOS to take off and become a real competitor in the global market, then it needs to enlist the help of other phone manufacturers.

It appears that Nokia-owned HMD Global is willing to pick up the torch, at least for now. A new report claims that the Nokia X60 will be the first non-Huawei device to be running HarmonyOS. This is a big gamble for the Nokia brand, as HarmonyOS does not include any of Google’s Messaging Services (GMS), and instead relies on Huawei’s HMS.

Part of the surprise with this rumor is that Nokia is not a Chinese brand, and has devices available in markets across the world, including here in the U.S. But it’s also possible that this is just a way for Nokia’s parent company to expand its reach even further after seeing how popular HarmonyOS has become in China so far.

As for what we’re expecting to see from the Nokia X60, the device is rumored to be a flagship competitor, with a couple of headlining features. The X60 could launch with a 200MP primary sensor, which would be one of the first devices with such a lens. Usually, we see or hear about devices sporting around 108MP, but nothing that pushes the limits to 200MP.

The X60 is also rumored to include an enormous 6,000mAh battery. In a world where smartphone makers seem to have capped themselves at around 4,500mAh to 5,000mAh for flagship devices, the Nokia X60 could blow them out of the water.

Considering what’s currently going on between the U.S. and Huawei, it’s highly unlikely that the Nokia X60 would come to the U.S. if it’s indeed running HarmonyOS. But we’ll have to wait and see what HMD Global, Nokia, and Huawei have been working on. 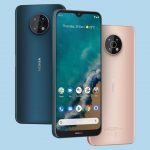