The one thing that we can look forward to every year is new technologies in the smartphones we buy. It really doesn’t matter what features are most important to you since we typically see improvements across the board. The only downside to all this innovation is that smartphone prices seem to get higher and higher with every new generation.

Fortunately, new technologies become commonplace after a few years, eventually making their way into mid-range devices and then trickling down to the budget segment as well. Just a few years ago, it was hard to find a decent smartphone for $250, but in 2020 we’ve seen a handful of compelling smartphones at that price point. The new Poco M3 and its $150 price tag sounds completing on paper, but does its budget-friendly sticker price really overcome the compromises that were made in order to deliver a phone this cheap? 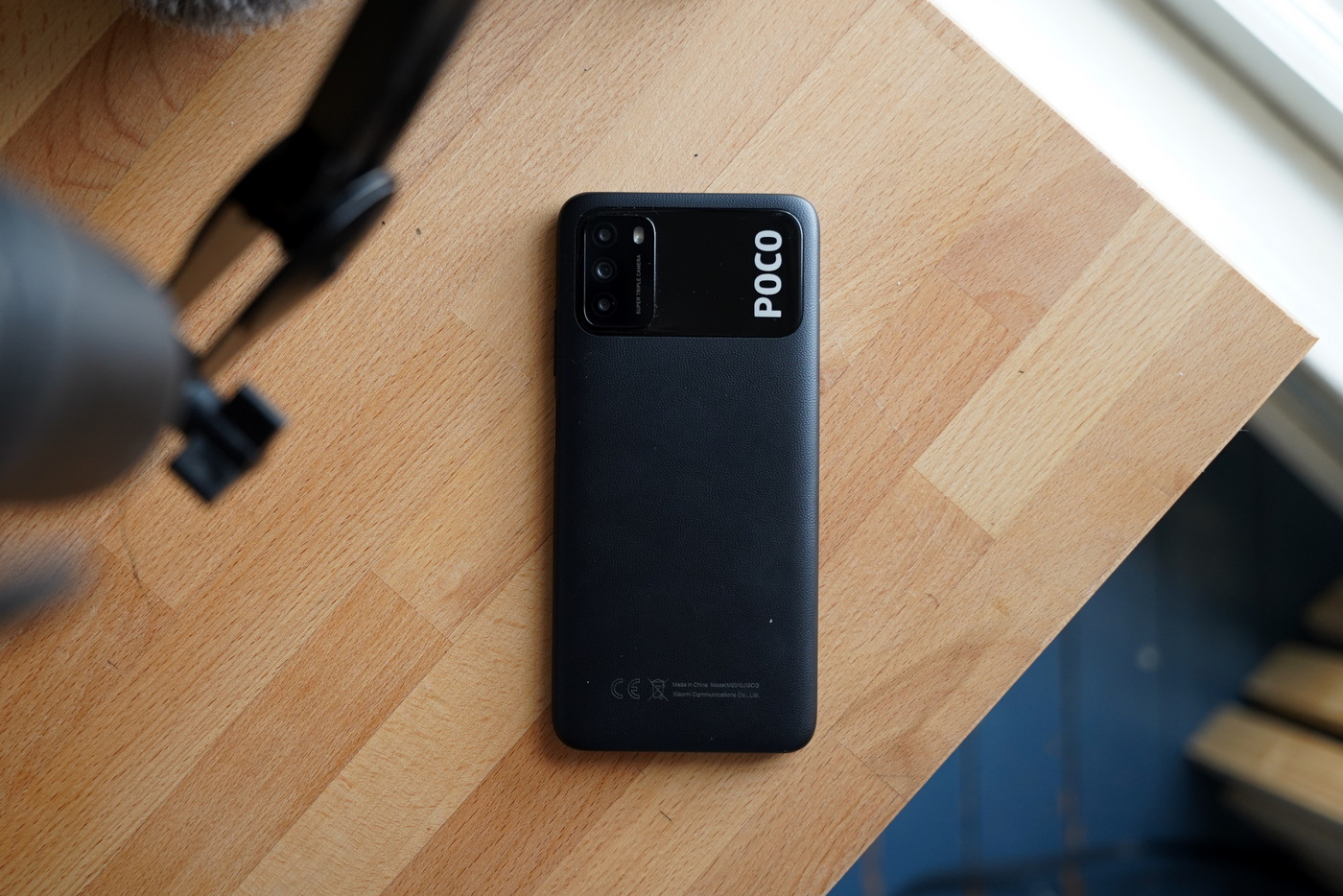 I don’t think anyone will be surprised to hear that the Poco M3 doesn’t feature a premium glass and metal body. Poco didn’t even put in the time and effort to make the polycarbonate shell of the phone look like glass as the company has done with a few of its other cheaper smartphones. If you ask me, that’s a good choice.

The Poco M3 embraces its plastic build completely, with a textured finish on the back that smooths out when it reaches the edges. The defining design feature on the back of the phone is the absurdly-large glass panel for the camera module that spans that takes up 20% of the surface area. It looks a bit odd at first, but Poco’s design choice is instantly recognizable to those who have seen the Oneplus 8T Cyberpunk 2077 Special Edition. On the black model, it doesn’t really stand out, but if you’re into the design, you can always pick the phone up in yellow or blue and really show it off.

The phone’s bargain-basement price means you won’t get an in-display fingerprint sensor, but Poco has incorporated it into the phone’s power button while also giving users a 3.5mm headphone jack, IR blaster, and stereo speakers — a feature that’s typically reserved for smartphones that cost four times as much as this one does. 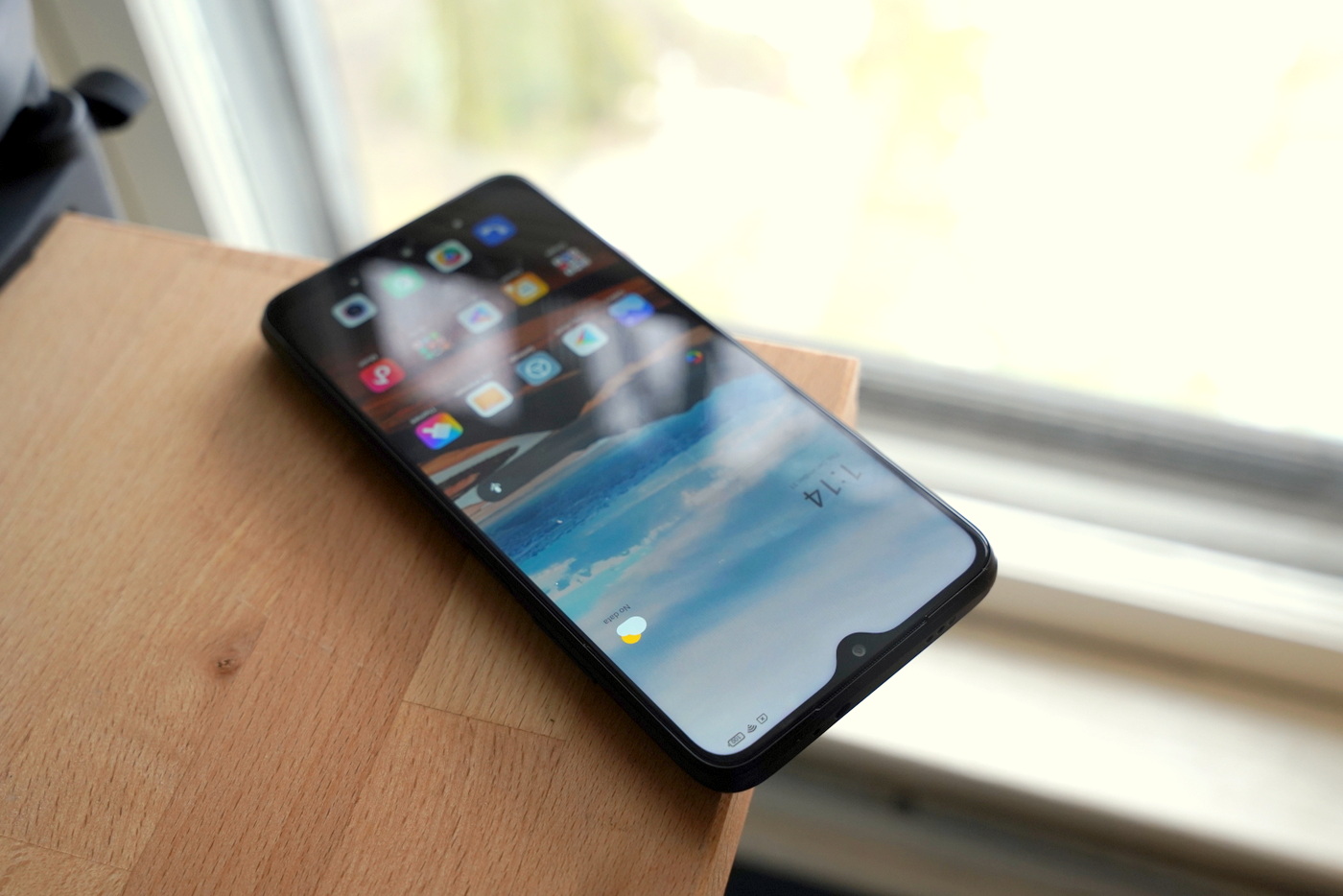 For me, the highlight of the Poco M3 has to be its 6.53-inch display. You’d typically expect to find a 720p display when looking at smartphones in the sub-$200 category, but the M3’s LCD panel actually sports an FHD+ resolution, giving it a 375ppi. The front-facing camera peeks through a teardrop notch at the top and the bezels are a bit thicker than what you see on flagship-tier smartphones, but those compromises are perfectly acceptable.

HDR support is missing, but it does offer 1500:1 contrast ratios, 400 nits of brightness (maxing at out 440 nits with Sunlight Mode turned on), and extremely deep black levels, allowing the display to get extremely dim for low-light media consumption. 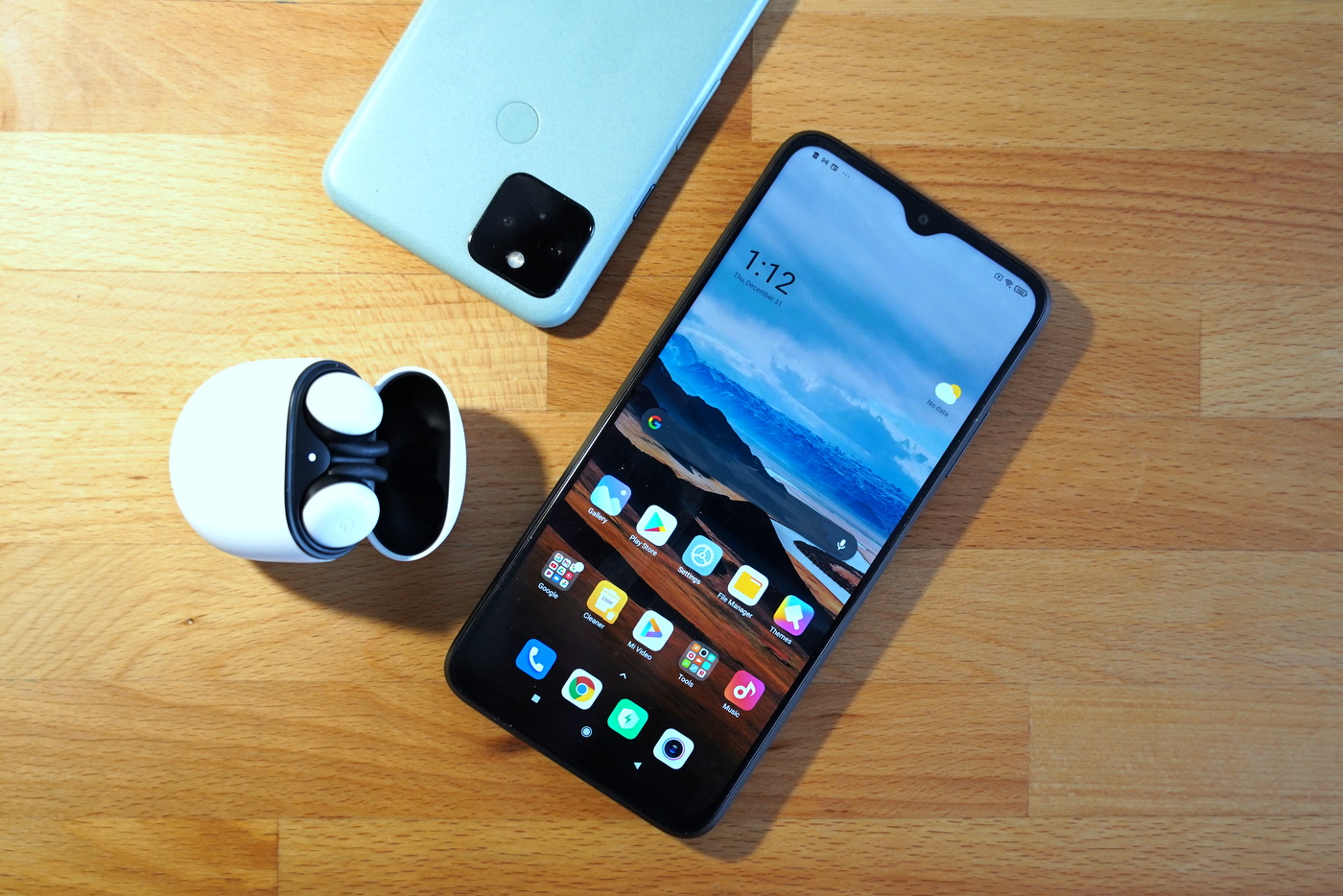 We have seen quite a few mid-range devices in 2020 that offer incredible performance than to Qualcomm’s new 700-series chipsets. Unfortunately, the Poco m3 is using a Qualcomm Snapdragon 662. Let’s just say that you won’t have a good experience if you try loading up any of the latest and greatest Android games.

The chipset is powerful enough to keep Android running somewhat smoothly, but there are a few stutters that pop up here and there when scrolling web pages in Chrome or when browsing your feeds on Instagram and Facebook. It’s not something that happens often enough to cause any serious frustration, but it’s something to be aware of.

Only having 4GB of RAM is definitely something that will be noticed if you’re a heavy multi-tasker, but if you’re on your phone all day long for work or school, I’d recommend spending a bit more on a smartphone that has at least 6GB of RAM.

The phone’s software is pretty much identical to all other Xiaomi and Poco phones on the market. It’s running Android 10 with the November 2020 security patch and will likely be updated to Android 11 during the first half of 2021.

The MIUI skin can take some time to get used to if you’re coming from a Samsung or Pixel device, but the interface will feel familiar to anyone who has used a Chinese smartphone in the past. There are plenty of customization options that allow you to tweak the settings to your heart’s content, something that I’ve always appreciated about MIUI. 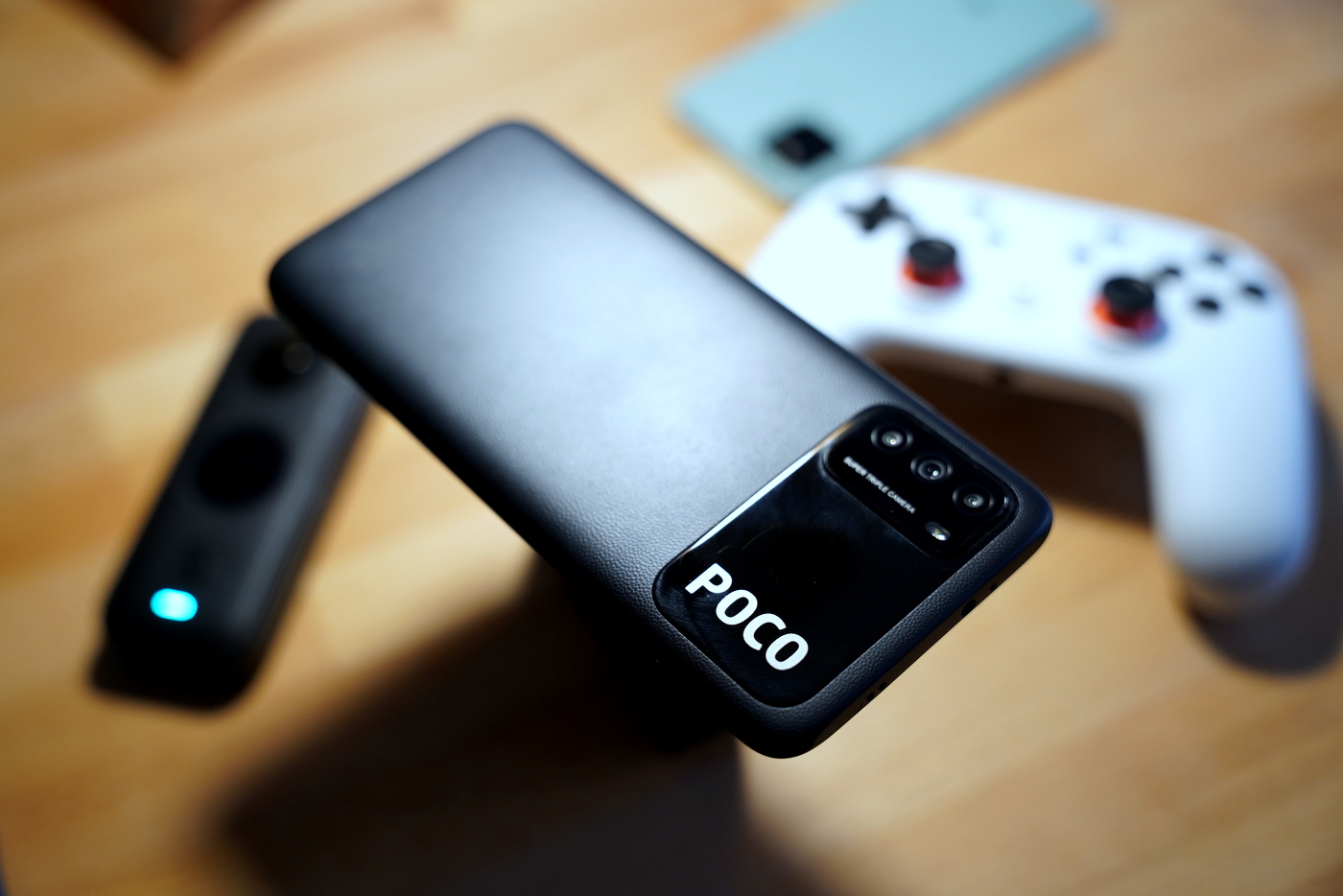 For me, one of the most essential features of a smartphone that it also doubles as a camera. I think we can all agree that having a smartphone with us at all times has changed the way we view and interact with the world around us.

Personally, having used the best smartphone cameras released in 2020, I would not want to use the triple camera system from the Poco M3 for capturing photos and videos on a regular basis. The results you get from the 48MP main camera sensor are a far cry from what the 12MP camera on the Pixel 4a delivers.

That being said, the budget-friendly Pixel 4a still costs $200 more than this smartphone, so expectations need to be lowered. The 48MP sensor isn’t bad when compared to other $150 to $200 smartphones. It can deliver some beautiful colors when the sun is out and if you have a steady hand, you can get some decent shots indoors or in low-light conditions, but those shots won’t come easy.

My main gripe is that Poco chose to spend money on a 2MP macro camera and 2MP depth sensor. The macro photos you can capture with this phone are far from impressive and manufacturers have proven time and time again that a depth sensor isn’t needed to blur the background in portrait shots. If Poco would have used the $5 it spent on those two components and invested it into a slightly better main camera module, I probably wouldn’t have anything to complain about. 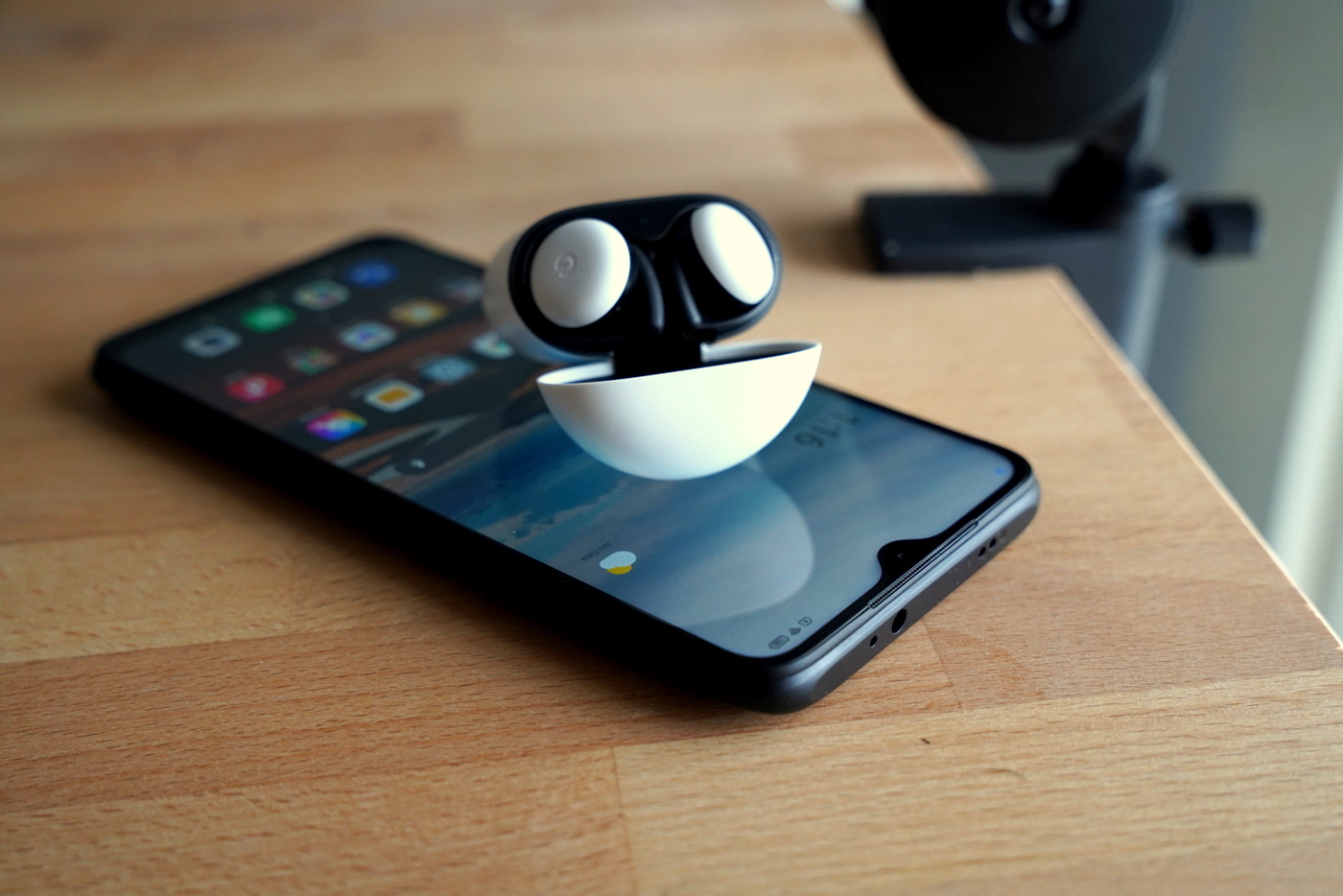 It goes without saying that the Poco M3 is a battery life champ. The 6,000 mAh battery inside the phone consistently lasted two and a half days on a single charge with more than 11 hours of screen-on time. The battery capacity certainly has a lot to do with it, but the underpowered Snapdragon 662 from Qualcomm and lack of 5G connectivity also play a big role.

Poco has limited the device to 18W fast charging which takes two and a half to three hours to charge the device from 0-100%. But they’ve also included reverse wired charging, allowing you to use the phone’s 6,000 mAh battery as a power bank and charge your headphones or even your friend’s smartphone.

Like any other budget-friendly smartphone, the Poco M3 has its fair share of compromises. It’s far from being the perfect smartphone, but when you add it all up, the experience that the phone offers is exceptional when you factor in the price.

Sure, we’d all like to have a better camera and a smartphone that can play the best games Android has to offer, but if your budget is the biggest concern, the Poco M3 is without a doubt an exceptional buy and by far the best $150 smartphone I have ever used.