How to recover complex video files with Recoverit

If you’ve ever had a hard drive fail on you, we totally understand that sinking feeling where you feel like all your files are gone for good. This is especially worse if you’re a video editor and you might have lost hundreds of hours of footage, but did you know that you can actually recover videos that have been lost?

Thanks to video recovery software like Recoverit, restoring your complex videos has never been easier and you should be able to get your lost video files back in quick and easy steps.

A lot of times when we watch videos, a lot of work goes behind the scenes before we see the final product. You might think that a 30-second commercial seems like an easy thing to shoot, but there’s a lot of effort that goes into it. There’s lighting, there’s sound, there’s framing, there’s a storyboard involved, there’s color correction, and more – all of that just to get a 30-second video clip out.

This is why it’s easy to empathize whenever we hear of hard drives failing and people losing their video files in the process because it means that all those long hours spent have gone down the drain. Depending on the contents of the videos, some of them might not be possible to reshoot, or you might have to incur extra costs to rehire the actors, production crew and so on.

Why Do Videos Sometimes Get lost?

In an ideal world, all our files saved on memory cards, hard drives, and servers would remain in place forever, but we’re sure that many of you have probably experienced a scenario when a file you try to open has become corrupt, or the hard drive is no longer detected.

There are several reasons as to why this could happen, so let’s take a look at it.

Nothing lasts forever, and that is true when it comes to our hard drives and storage mediums. If you use older HDD drives that have spinner platters, this might hold especially true as eventually, all that spinning will cause wear and tear that could result in a mechanical failure that makes the drive no longer readable or accessible.

You might have come across an instance where you try to open a file, but only to be told that the file is corrupted and unreadable. There are reasons why this could have happened, like when you’re transferring a complex video file and you unplug your hard drive before the transfer is complete.

It can also be because you fail to shut down your computer incorrectly, and as a result, the file might still be processing before your computer shuts down and becomes unreadable. There could also be bad sectors on your hard drive which might not be your fault, but could still cause a file to become corrupt and essentially lost.

Sometimes a video file can become lost simply due to an error on our part. It might be because we accidentally delete the file ourselves without realizing what we’ve done until it’s too late. This can happen when you’re bulk deleting and you accidentally select a video you meant to save by accident.

It can also happen when we mess around on our computer and make changes to the system settings like the user registry without knowing the consequences of our actions. This can not only result in video files getting lost, but it could also result in a system-wide damage.

That being said, sometimes these problems can be fixed and reversed, so if you’ve ever wondered if it’s possible to recover videos that have been lost, here’s what you need to do.

If the situations we just mentioned have happened to you and you have lost videos in the process or ended up with corrupted files, then let’s get started on how you can fix those problems in a few simple steps. 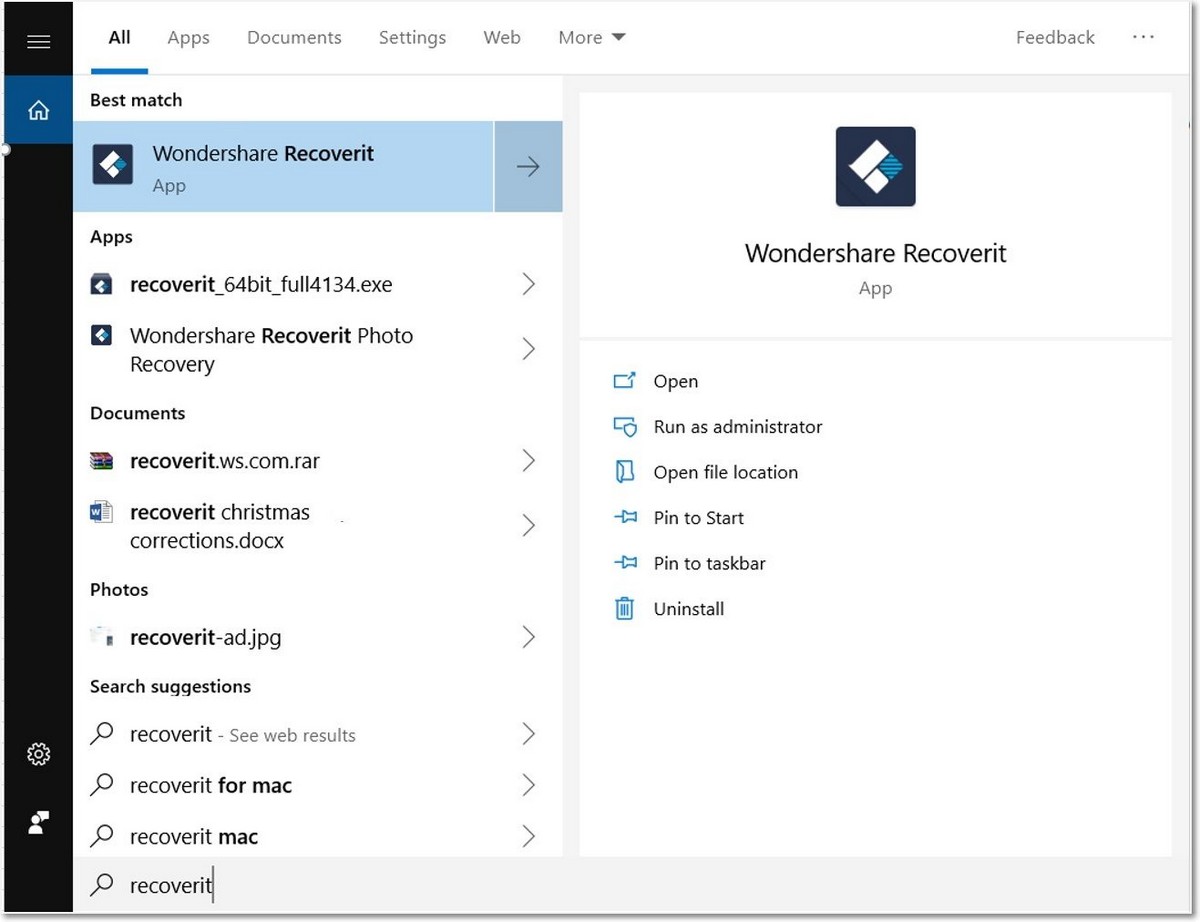 If you haven’t downloaded Recoverit yet, you can do so from their website where you can choose either the Windows or Mac version. After it’s downloaded, run the installation file, follow the guided steps, and launch the software.

Step 2 – Select the location of the lost files 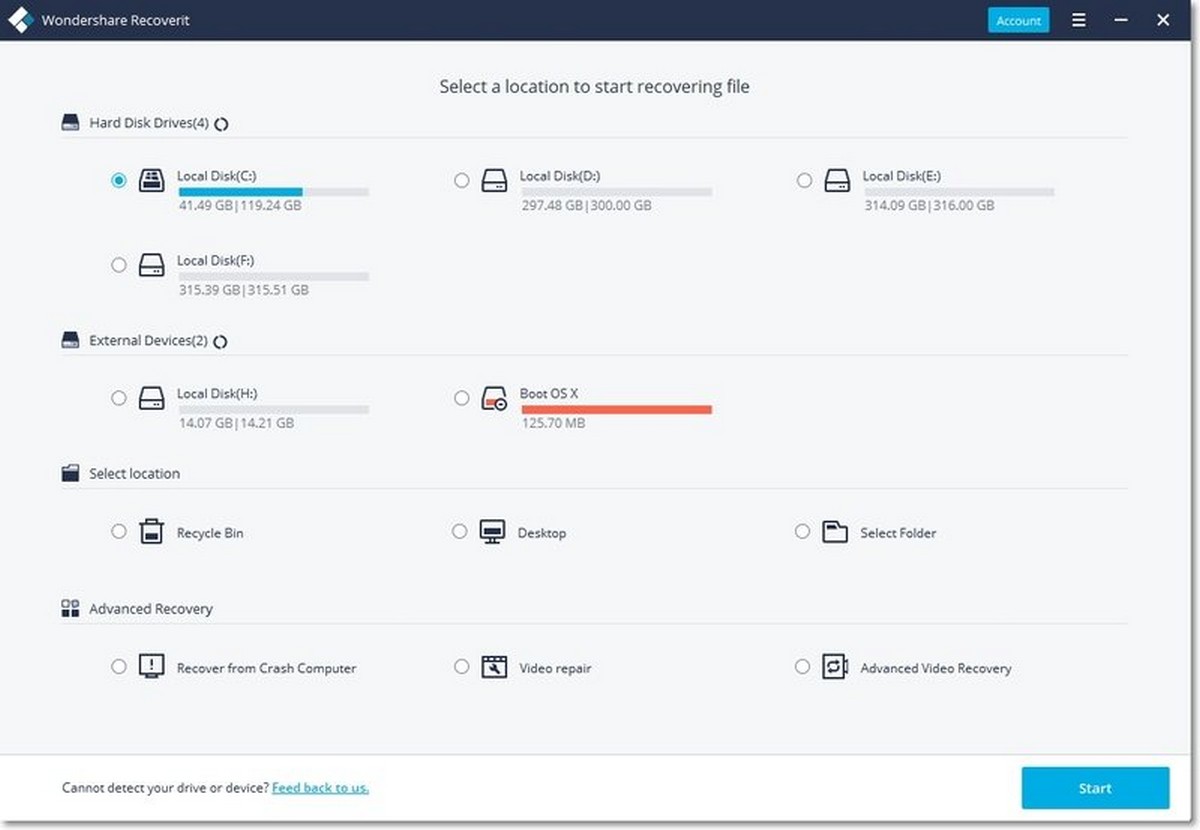 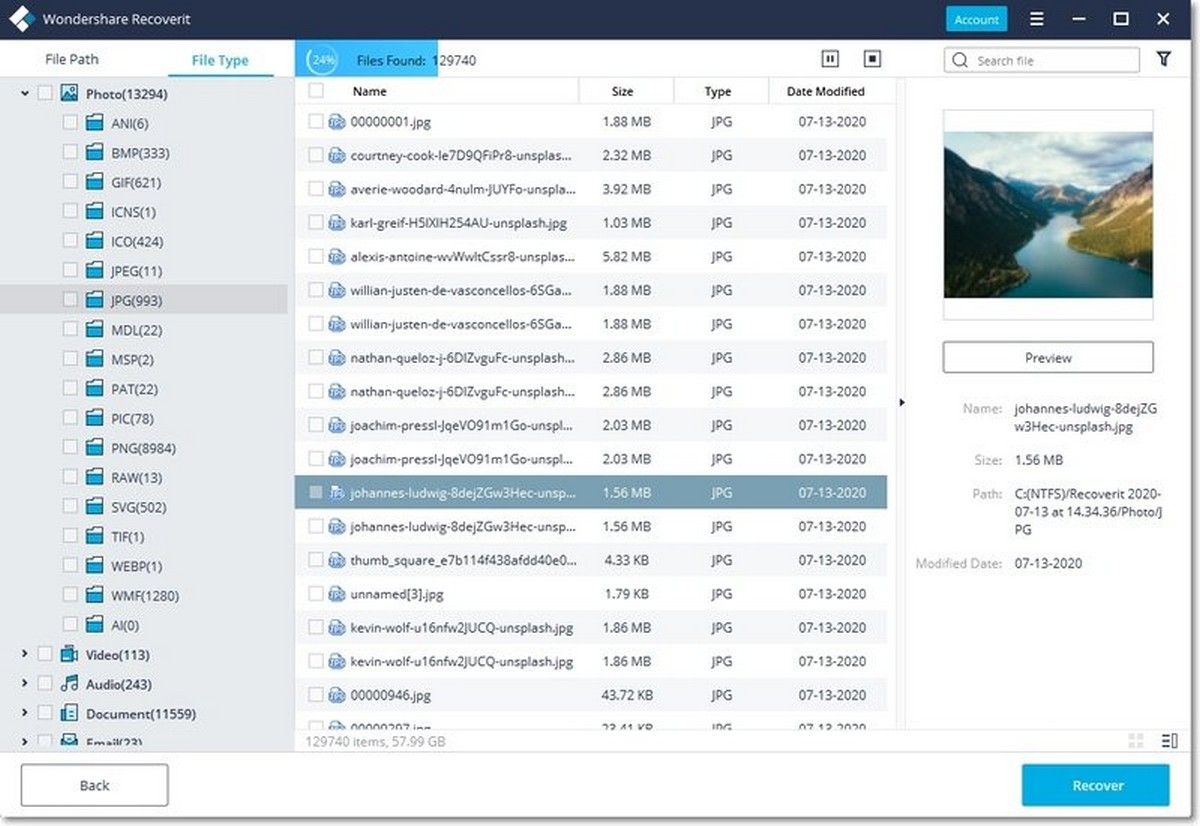 Once you’ve selected the location of your lost files, click Start. Recoverit will then start to scan that location for files that might have already been deleted. Depending on how big the storage is, it could take several minutes, or up to a few hours if it’s particularly huge and if there are multiple large size files present. 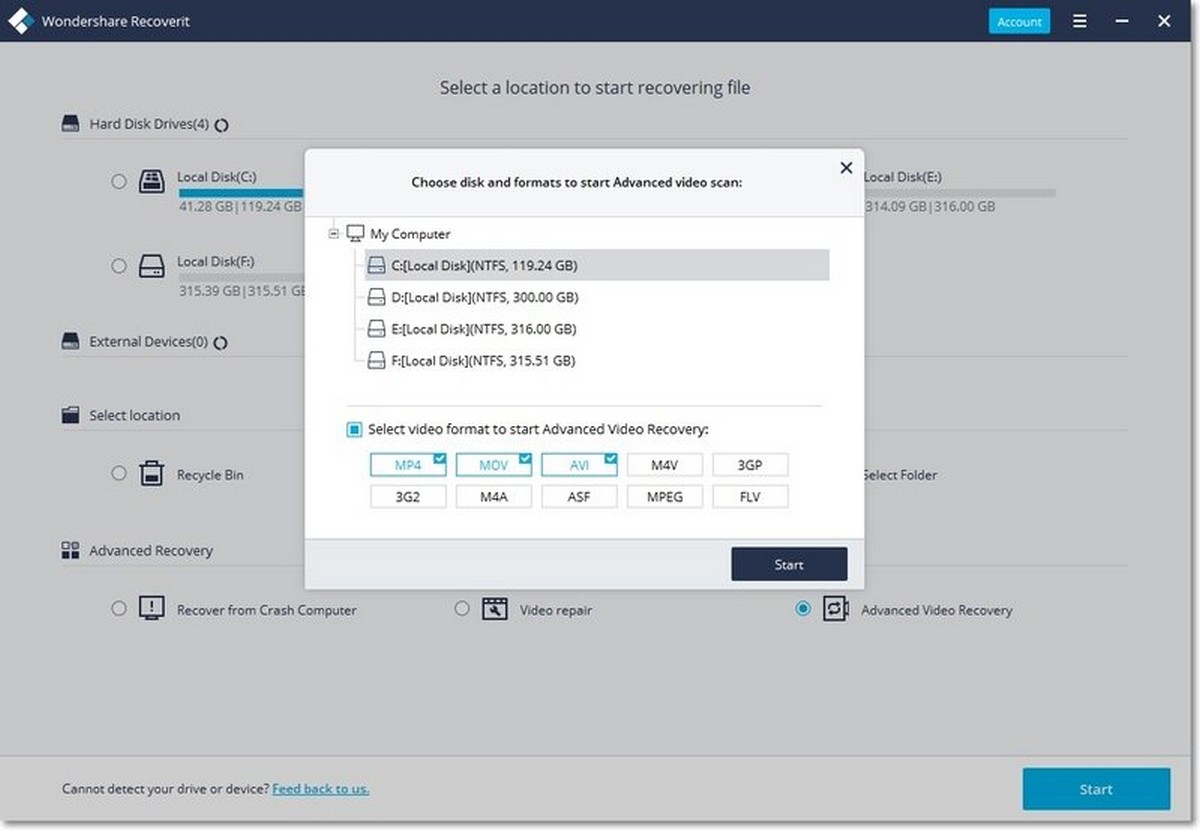 Alternatively, if you choose Recoverit’s Advanced plan, one of the benefits of the plan is Advanced Video Recovery. This feature lets you specifically filter for video file formats like MP4, MOV, and AVI. This means that if you’re only looking for video files, this filter will cut down the scanning process considerably. 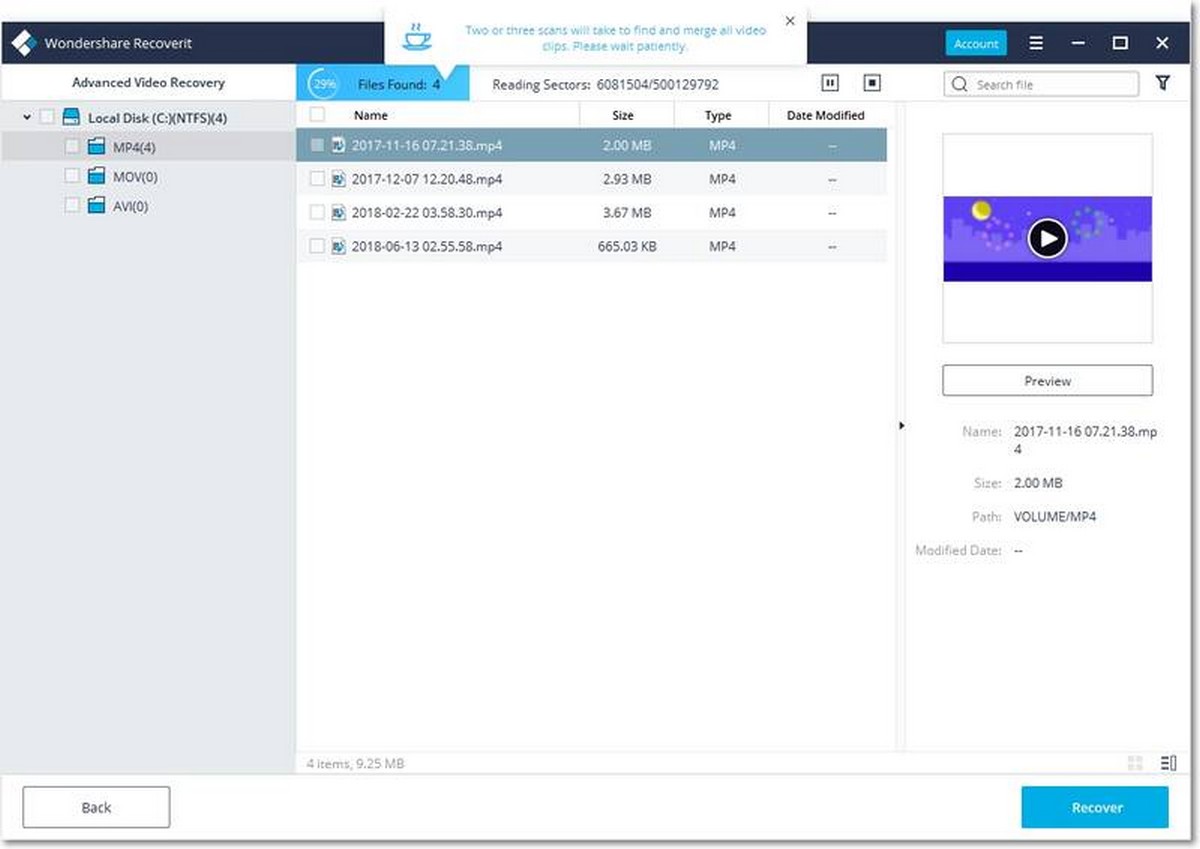 It will also do an extra deep scan by scanning multiple times to ensure that it has scrapped your drive and has looked absolutely everywhere possible to locate and recover your video files. It will also attempt to seek out video fragments and merge them together to form a complete file. 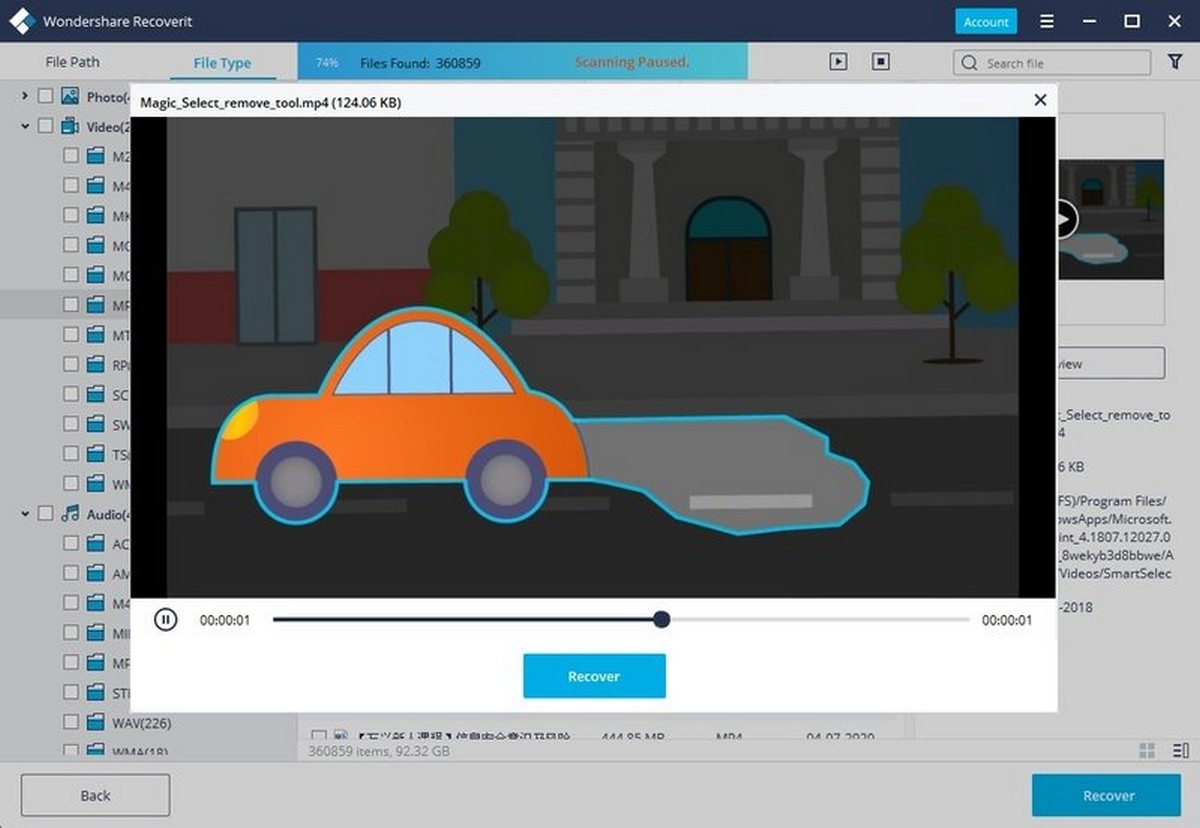 Select a location where you want the recovered video file to be stored, and click Recover again. It is recommended that you do not choose the same location that the file was originally stored. This is because like we mentioned above, one of the reasons for lost video files could be due to issues like bad sectors on your hard drive, so choosing a new location could prevent the same issues from happening again. 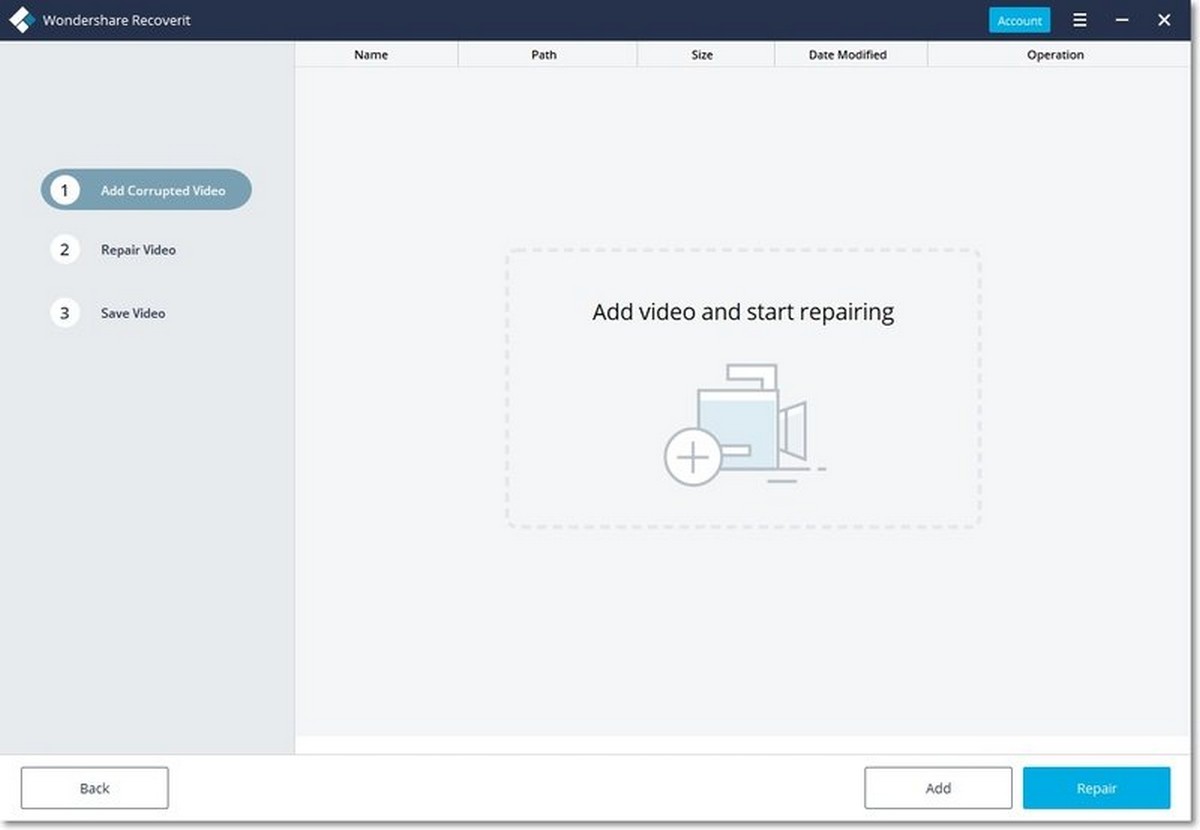 All you need to do is launch the Recoverit software, select Video repair, and click Start. You will then be prompted to add the corrupted video files to Recoverit, and once you’re done click Repair and let the software do its work. 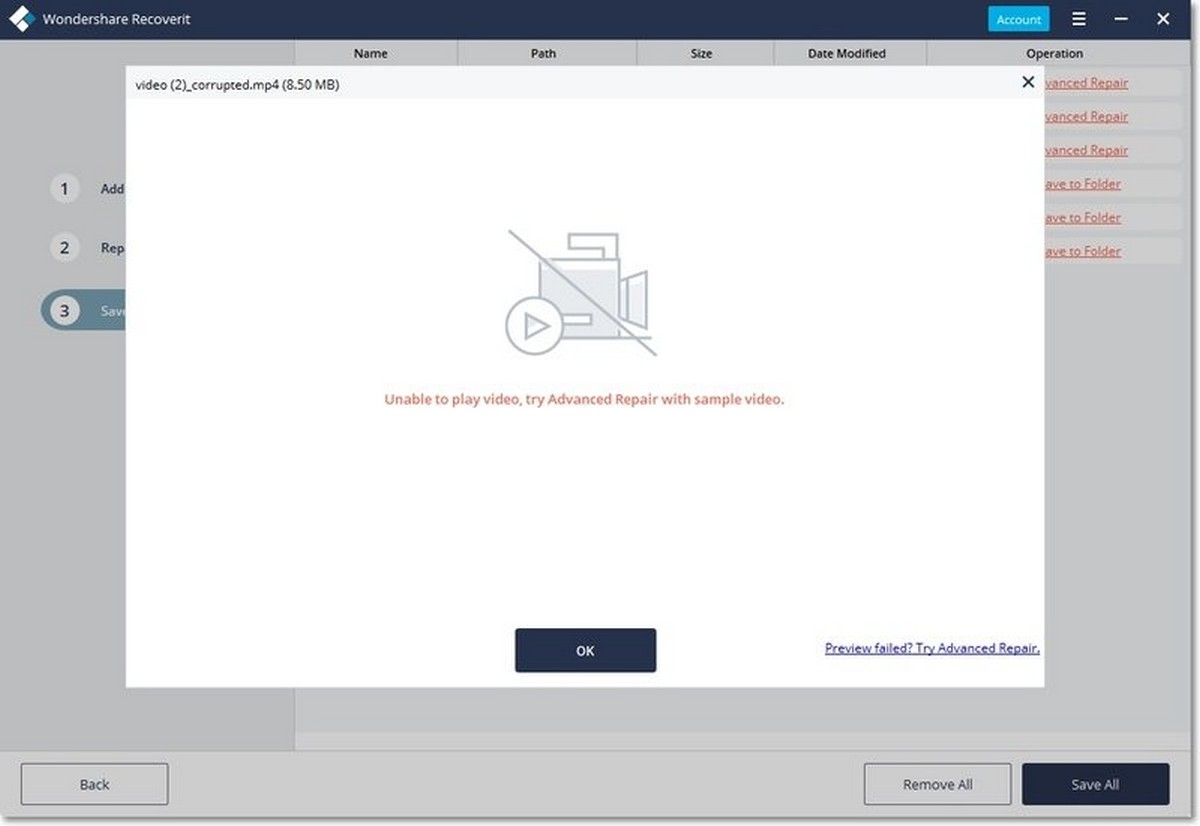 In the event that the repair tool doesn’t yield the results that you were hoping for, don’t worry because there’s another way. When Recoverit prompts you to let you know the video cannot be repaired, click the Advanced Repair option located at the bottom right corner of the window. 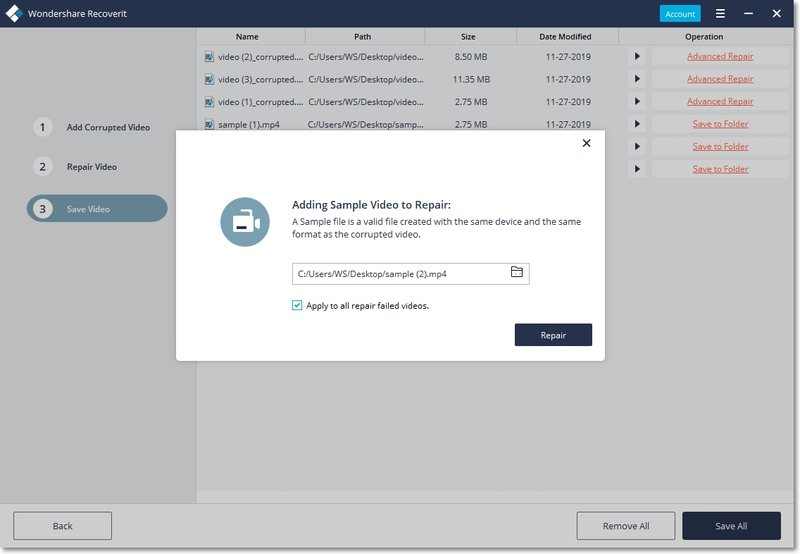 You will then need to add a sample video which is a video file of the same format that was shot using the same device. This means that if you used your phone to shoot the corrupted video, you’ll need to use another video shot by that same phone to be used as a sampler. Once you’ve added the sample video, click Repair.

Upon successful repair, a new window will open to ask you where you want to save the repaired videos and you’re all done!

This means that whether you’re trying to recover video files from a Windows or Mac computer, a memory card from your camera, an SD card that you were using in your smartphone, deleted files from an external hard drive, you will be able to recover those files easily.

It used to be that back in the day, whenever a file was corrupted or if contents were lost on a hard drive, there was really not much you could do about it. The tools and methods back then were a lot more complex and advanced, where it would not be easy for beginners to try and figure it out.

An alternative would be to take the drive to a data recovery specialist, but that would be a costly endeavor, not to mention why would you want a stranger combing through your files in the first place? With Recoverit Data Recovery software, the entire process of video recovery of complex videos can be done in a matter of minutes that anyone should be able to do.

How to upgrade your PC to Windows 11