True wireless earbuds are the standard these days with the 3.5mm headphone jack fading into memory for most smartphone users and now active noise-canceling (ANC) is finally falling into the realm of affordability. Not too long ago ANC was strictly for headphones in the $300 and up range, but today we are taking a look at the EarFun Air Pro, a pair of true wireless headphones with ANC that cost less than $80.

If you aren’t familiar with EarFun already, the company has quickly built a reputation for delivering quality audio at pretty remarkably low prices. Earlier this year I reviewed its EarFun Air true wireless earbuds and came away thoroughly impressed with the audio quality and the overall feature set with a number of typically high-end inclusions. 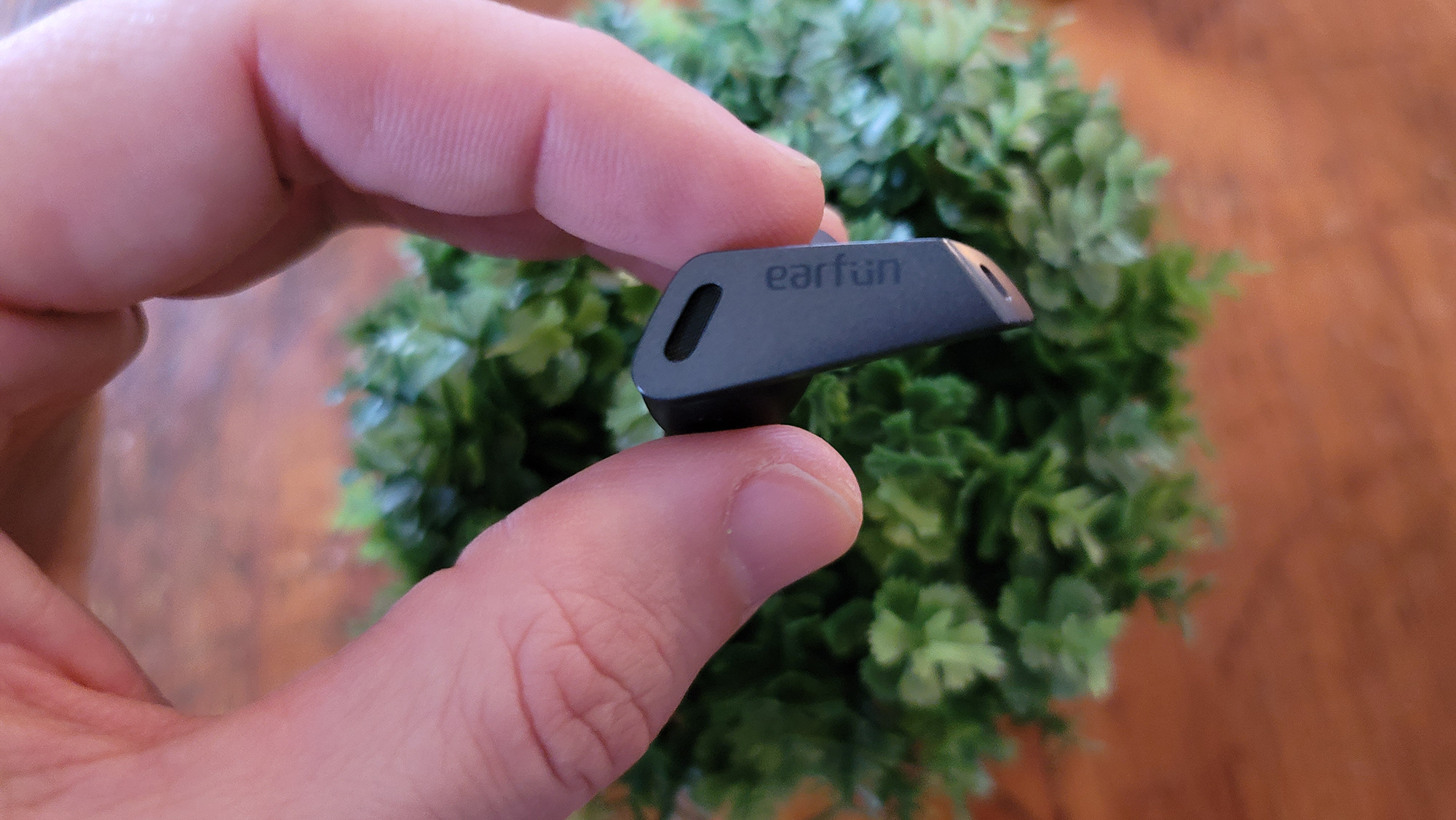 The new look for the EarFun Air Pro was a welcome surprise when I opened its rounded case as it has taken a turn away from the AirPod look with a much bolder and distinct angular look to the stems. The earbuds also thankfully feature a matte finish, making them shrug off fingerprints far better than their glossy predecessors.

The EarFun Air Pro still relies on capacitive sensors for controls and while I still have a preference for actual buttons, I found these to be extremely reliable. The right earbud gives you play/pause (2 taps) and skip (3 taps), while the left earbud will activate Google Assistant (2 taps) or cycle through ANC modes (3 taps).

The EarFun Air Pro includes three different ear tip sizes to ensure a secure fit. I found them to be incredibly comfortable and light enough to nearly forget they are there. I wore them running and biking and never had an issue with them moving around on me and even deliberately trying to shake them out was a no go.

The EarFun Air case used a drop-in design like the AirPods, but the EarFun Air Pro case moves to a more open design that I personally prefer. It is much easier to pull the earbuds out and they magnetically snap back in place when you return them to the case. The case also feels a bit more robust than the EarFun Air with a more satisfying snap to closing its top. 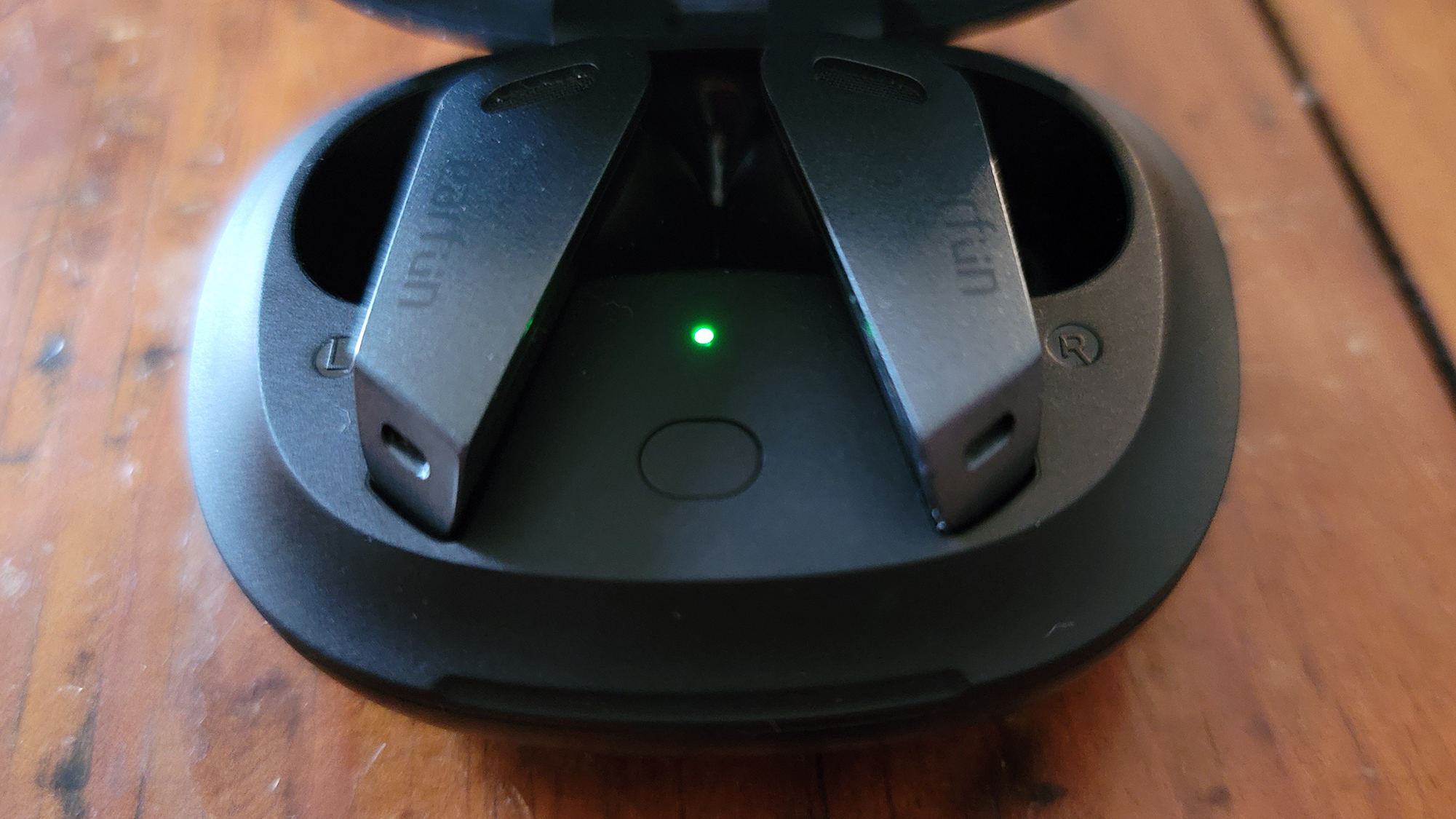 Battery life is kind of astounding on the EarFun Air Pro with up to 9 hours on a charge with the earbuds themselves (7 hours with ANC on) and a total of 32 hours including the case.

Obviously, you have no chance of killing the EarFun Air Pro battery completely in a single day and you would be hard-pressed to manage it in two or three days. For my usage, I was typically only charging them once a week, which basically means charging is a non-issue as you can plug them in and top them up completely in about an hour. 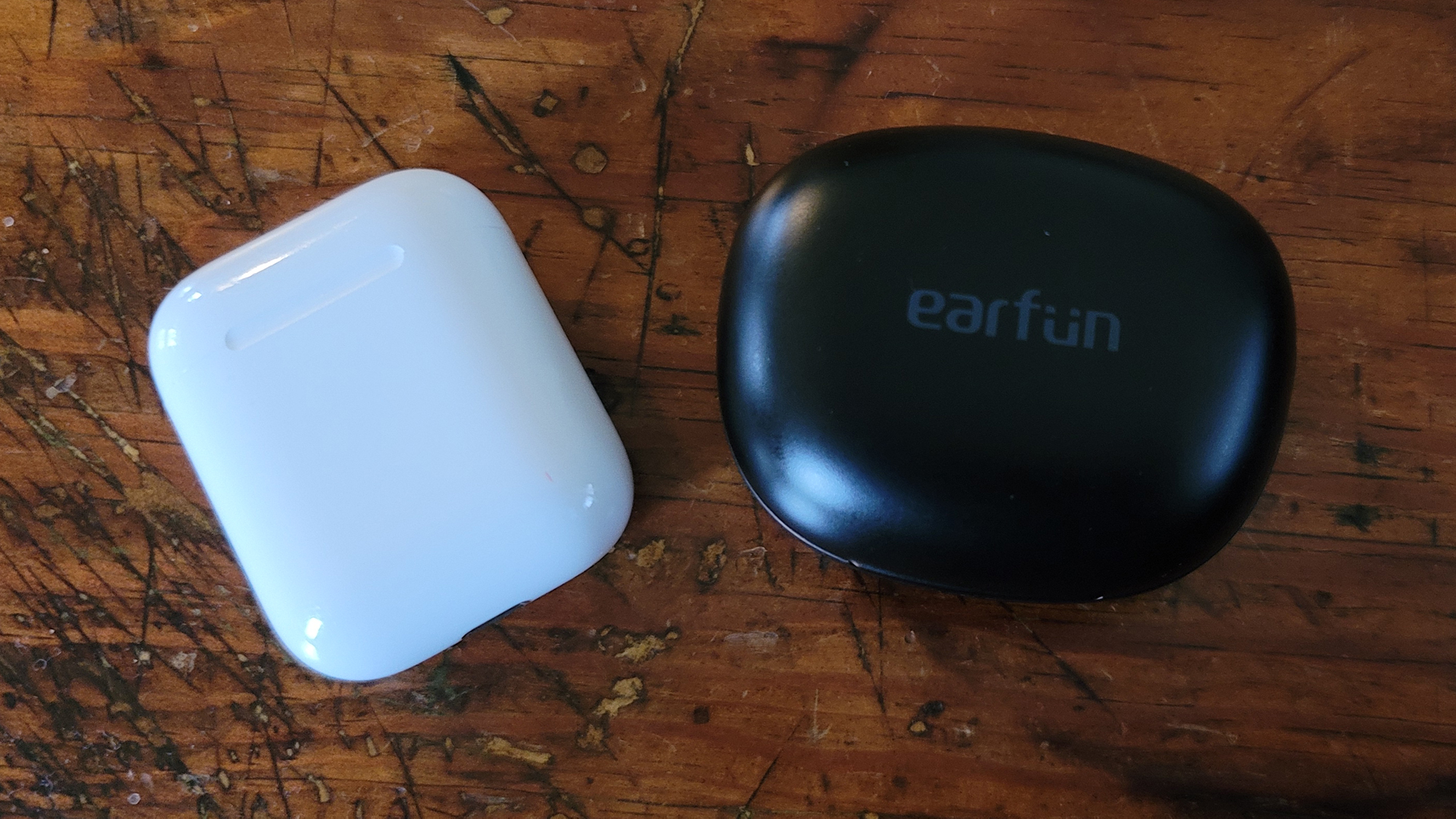 I will offer my standard warning that I am far from an audiophile, most of my listening time is spent on film scores that are my preferred writing music and outside of work hours I listen to a mix of spoken word content like audiobooks and podcasts. During audio testing, I work a lot more music into that mix, so I hopefully can offer some meaningful expectations for a variety of users.

Now I’m going to actually address the ANC first as I think it impacts the rest of my feelings on the audio performance of the EarFun Air Pro. Presumably, this won’t come as a huge shock, but the ANC in the EarFun Air Pro won’t lock out all the sounds around you by itself like say the Bose QC 35 II, but it does allow you to dramatically reduce the volume that you need to enjoy your music.

With no plane travel or visits to the local coffee shop possible at the moment, I turned to my gas fireplace and its fan as the droning background noise to drown out. At only about 20% volume it was completely gone with ANC on while I needed to push to around 50% to achieve the same in normal mode. If you are looking to let noise because you are out for a run or walk and need to stay aware of your surroundings the ambient mode does an excellent job there.

Turning now to the actual audio performance, it’s worth mentioning that the EarFun Air Pro are tuned by Edifier, these earbuds are largely a rebranded version of Edifier’s own NB2 earbuds. As you would expect from a high-quality brand like Edifier the overall sound quality is excellent with excellent clarity throughout the full range if you want to push them.

The bass was also a pleasant surprise as particularly in the more affordable headphone range this is often the first thing to go and the lows absolutely show up on the EarFun Air Pro. I’d actually say if anything the highs top out a little lower than I might expect, but this is really reaching for a problem and may simply be that I’m far more accustomed to the alternative being an issue.

Overall I felt the EarFun Air Pro did a solid job with everything that I threw at it during my testing including music, spoken word and movies with the ability to shift the ANC mode just adding an extra dimension for tuning the headphones to my listening environment. 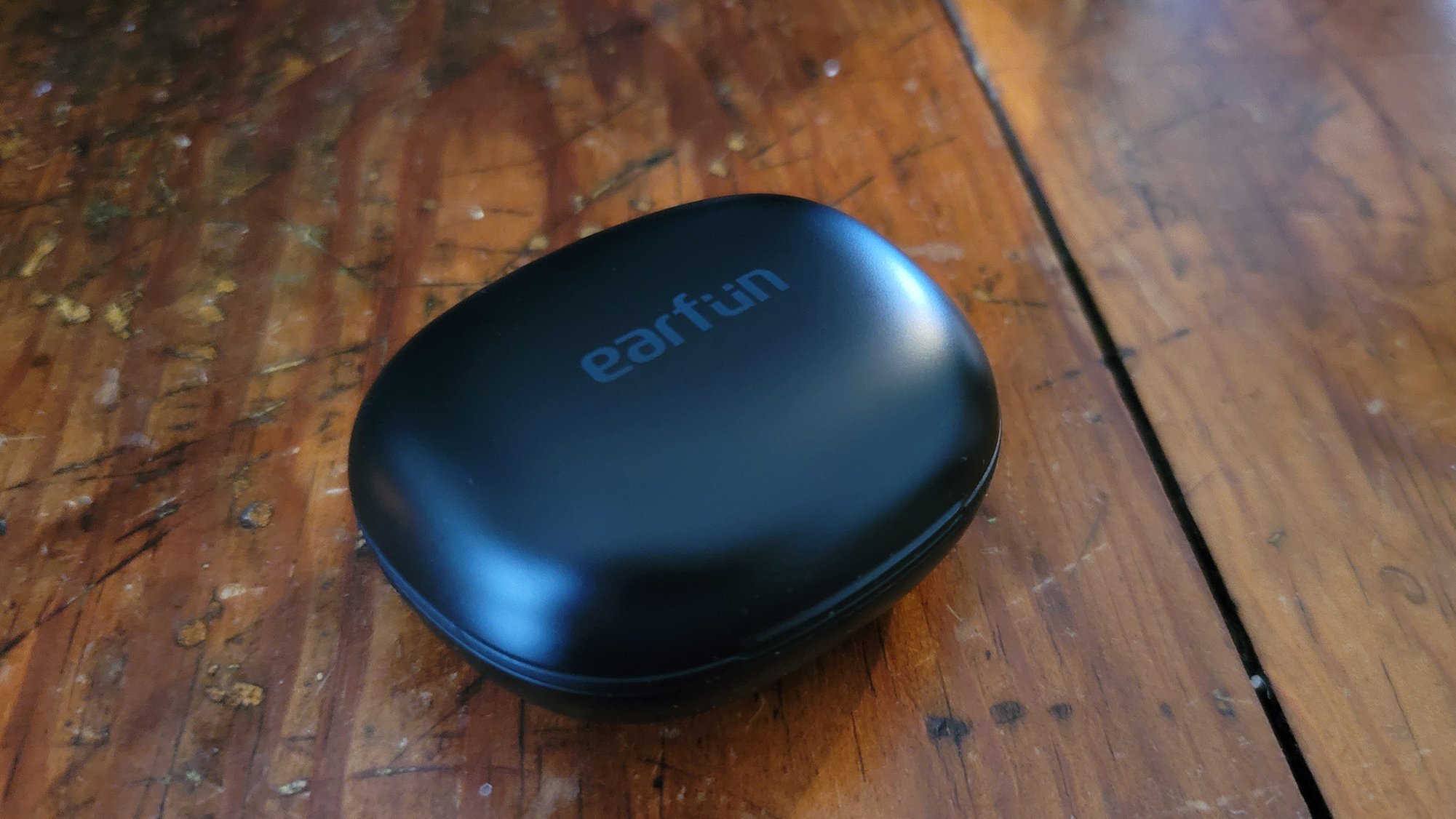 The EarFun Air Pro, unfortunately, doesn’t get the full IPX7 waterproof treatment found in the EarFun Air, these headphones are IPX5 so they will hold up to sweat or a splash of water. As obviously you aren’t using them for swimming regardless I don’t think this is a huge deal, but it was nice to not worry if I was caught in the rain or something.

Two features that are dramatically better on the EarFun Air Pro than the EarFun Air are the on-ear detection that pauses your audio automatically if you remove either earbud and the capacitive controls. I found both of these to work nearly 100% of the time and are at least as reliable as some of the nearly $200 earbuds that I’ve tested.

If you use your earbuds as a mic for calls on your phone or for Zoom meetings these should do a solid job for you as they deliver clear audio while also locking out any ambient sound well thanks to the three mics onboard each earbud.

Again EarFun definitely looks to make themselves synonymous with value and that is certainly the case again with the EarFun Air Pro. While the basic stem design isn’t reinventing the wheel, the sheer volume of features packed into that unassuming shell more than makes up for it and that’s before you get to the sound quality that in my experience holds up well against headphones twice its price and beyond.

The EarFun Air Pro retail for $79.99 with a 10% discount coupon, bringing them down to $$72, which makes them about half the cost of some competitors. 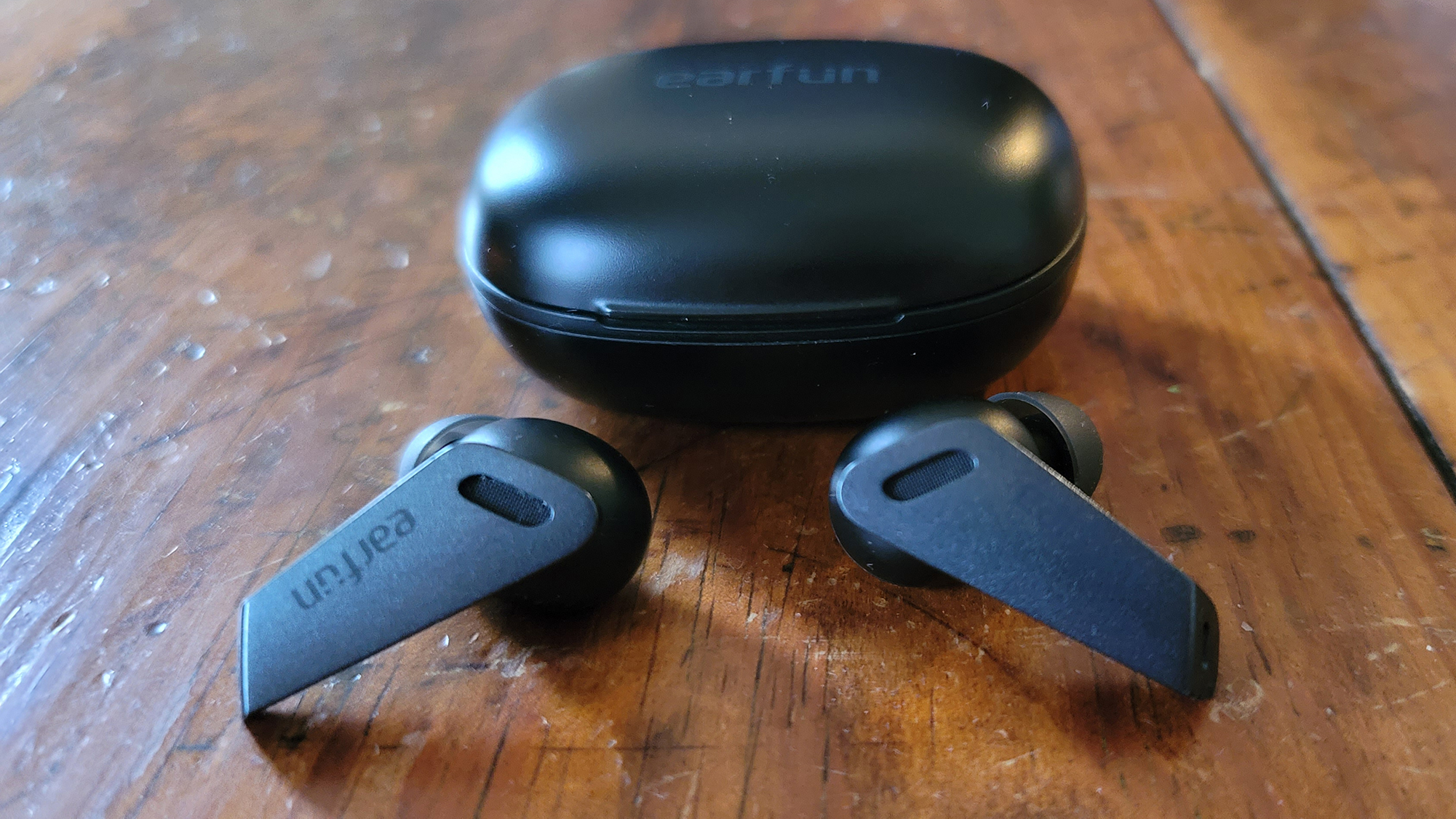 The EarFun Air Pro is yet another amazing value proposition from EarFun with performance improvements over the already impressive original EarFun Air along with the headlining inclusion of ANC that works far better than I expected from a pair of earbuds and should help you keep the volume down a little and spare your hearing.

With the exception of wireless charging and the full waterproofing going away everything else about the EarFun Air Pro is an upgrade from its predecessor and I think most users won’t miss those two features. For day-to-day use the marathon battery life, reliable controls and improved audio with ANC more than makes up for those shortcomings and make these another winner from EarFun.

At under $80 the EarFun Air Pro makes ANC accessible for almost any budget and on top of its solid feature set it delivers audio performance that punches well above its weight.