Remember back in the day, T-Mobile’s Sidekick handset was one of the must-have phones in the market? We have to say that we do miss having a screen that flips/swivels out, and the good news is that this design could be making a comeback. This is according to a couple of reports out of Korea from the Korean Herald and ETNews, both of whom are claiming that LG could have such a phone in the works, but with a modern twist.

According to the reports, it seems that LG is working on a new handset codenamed “Wing”. This is a dual screen smartphone where one of the displays can actually swivel upwards into landscape mode, showing off a secondary screen underneath it which presumably would be used for a keyboard or maybe media playback controls, for example.

We imagine that it could be used to display additional information without taking up the main screen’s real estate, like if you were on Google Maps, the bottom part could show you things like a business’s opening and closing times, address, phone number, and so on. It could also potentially enhance the phone’s camera capabilities by displaying more manual controls.

LG is a huge proponent of the dual screen design based on phones like the LG V50 and LG V60. The company has yet to hop on board the foldable phone bandwagon, and if this rumor of the LG Wing is true, it looks like they’ll be digging in on the dual screen concept. 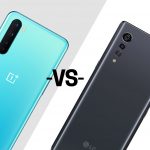 LG Velvet 5G finally gets a release date for

After doing out usual smartphone camera test with the new OnePlus Nord, we’ve transitioned into our camera comparison phase to see how the dual-camera setup on the back and dual-camera on the front of the Nord compare to other smartphones.