Master & Dynamic released their first headphones five years ago now. The MH40 were a wired pair of over-ear headphones aimed at replicating headphones of old both in looks and in durability. The result was a seriously gorgeous retro set of headphones that didn’t skimp on build quality or sound.

But five years later, the market has moved away from wired headphones. Wired still has its place, but everything is now wireless. And it has to be, since we don’t even have headphone jacks anymore. So to celebrate the fifth anniversary of the MH40 release, Master & Dynamic reissued these headphones with a wireless twist. 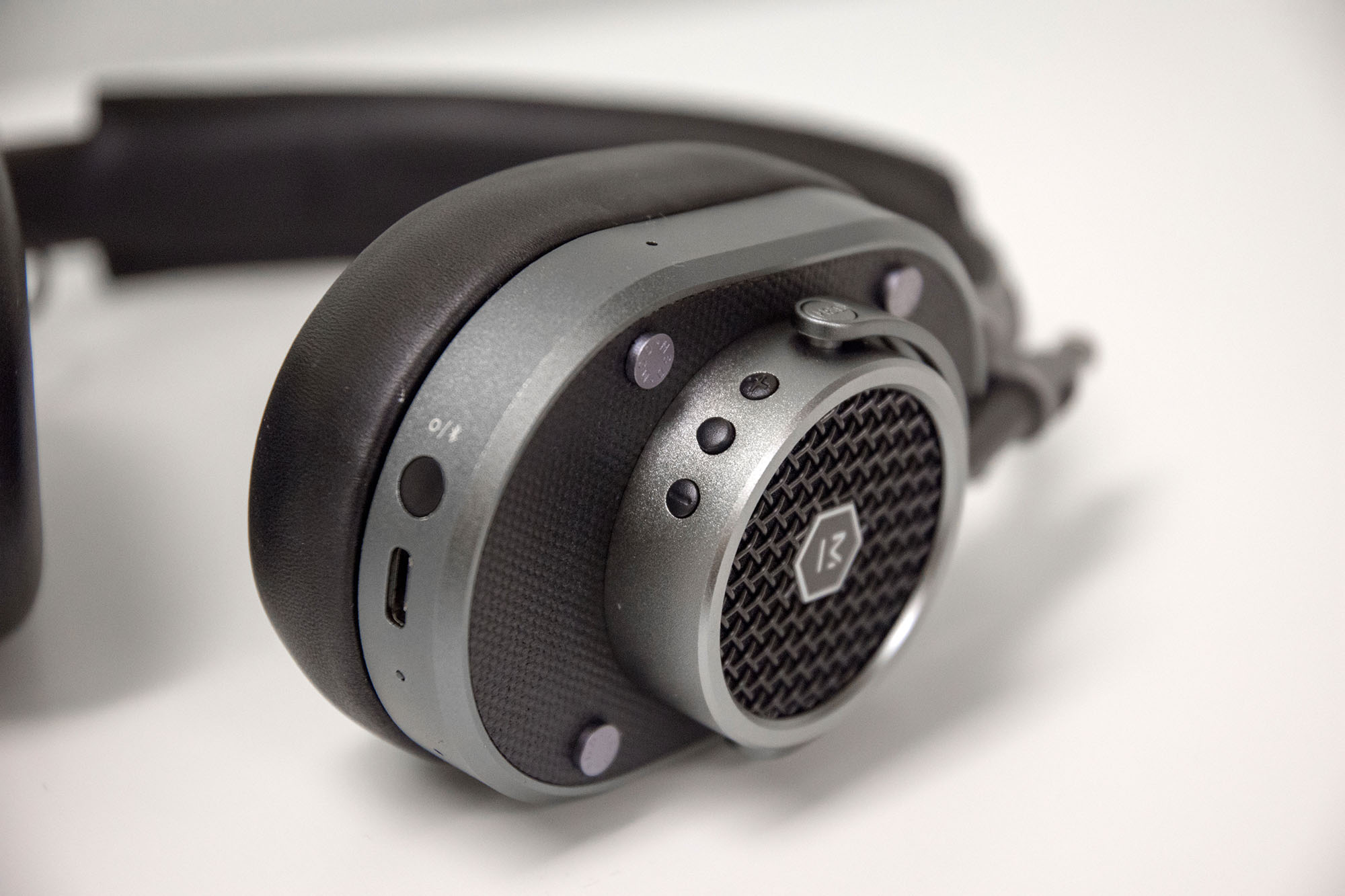 The Master & Dynamic MH40 feature all of their controls on the right side. At the bottom you’ll find a USB-C port, an indicator LED, and the power button. Further up on the narrow part of the cup there are three buttons. The center button is for play/pause and triggering the assistant, while the two flanking it are volume buttons. The center button is raised so it’s easy to find, and the controls are placed perfectly so they’re under your thumb when you put your hand on the ear cup. They’re simple, easy to use, and perfectly placed.

What you won’t find is a 3.5mm jack. This is a really surprising omission, knowing Master & Dynamic and their strive to be as consumer friendly as possible. Usually there’s a 3.5mm headphone jack on Bluetooth headphones (2.5mm if you’re unlucky) so you can plug an aux cable into them for wired use when the battery dies. Instead of a 3.5mm headphone jack, you get a USB-C to 3.5mm cable. Which works just as well.

The issue I have is that this is a proprietary cable running analog audio over USB. If you lose it, you’re out of luck. Not only that, but you can’t use microphones like the V-MODA BoomPro (which I love) and M&D’s own Boom Mic. This means you can’t use the headphones as a wired headset for gaming or conference calls. The included cable doesn’t have a mic on it nor does it have the pin on the 3.5mm end to utilize the headphone’s mic in wired mode. Yes, even calls won’t work with this cable and it’s a huge disappointment. 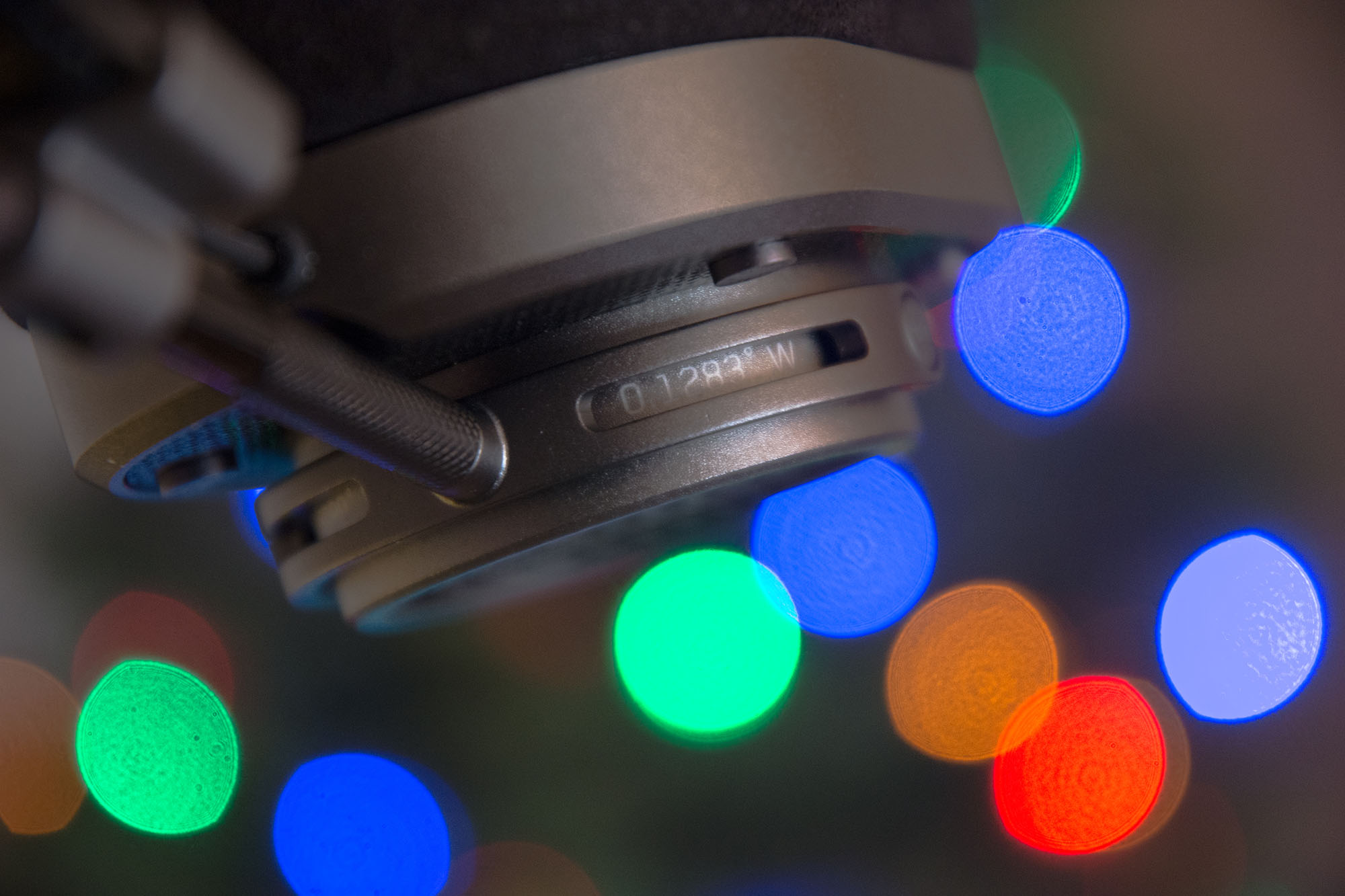 The originals have the coordinates for Grand Central Station under one of the ear cups, honoring a landmark of their home city. But with the MH40 Wireless, they’ve also added a set of coordinates underneath the hinge. These coordinates will be for one of ten world landmarks, and which you’ll get is random. it doesn’t really make the product any better, but this care and attention to detail does make it special.

If there’s one thing Master & Dynamic is known for, it’s build quality. All of their products are made with premium materials with real care and attention to detail. And with the MH40, it may show the most.

The original MH40 headphones were all aluminum and stainless steel, with no plastic to be found. The ear cups were made from one piece of solid aluminum each! They were wrapped in heavy grain cowhide on the headband and exterior pieces with lambskin on the inside of the headband and the ear cups. This lambskin is so smooth and soft and feels like a million bucks. And best of all, the ear cups are magnetic and just pop off. You can replace them when they’re worn, or throw on some optional alcantara ear cups for max fuzzy comfort.

The new MH40 Wireless are almost identical, with the same body and construction. The main difference is that Master & Dynamic traded out much of the stainless steel for more aluminum. This makes the headphones 25% lighter, at 276 grams rather than 320. Both for comfort and portability, this is a big improvement. The cowhide was also traded out for coated canvas, which has a unique look and feel.

Otherwise you have the same incredibly solid construction. The rivets on the faces are engraved with “M&D”. The pivot points for the hinge are also engraved. The adjustment mechanism has a window with numbers on the shaft. It also has no detents, just a smooth movement. I wish it was tighter like the MW60 though, as it does easily shift. The top of the adjuster has a ridged cap with the logo, while the bottom is beautifully knurled. The headband has partially exposed metal bars. The canvas on the top is nicely stitched in four rows. There are so many little details that make the MH40 Wireless truly special.

The only parts that don’t exude quality are the buttons. Unlike the MW60, they are plastic. They feel nice enough, but they do have a slight spring sound when pressed. It’s nothing bad, and it’s not nearly as bad as buttons on some other headphones, but it does stand out. The MW60 buttons were metal and delightfully clicky. 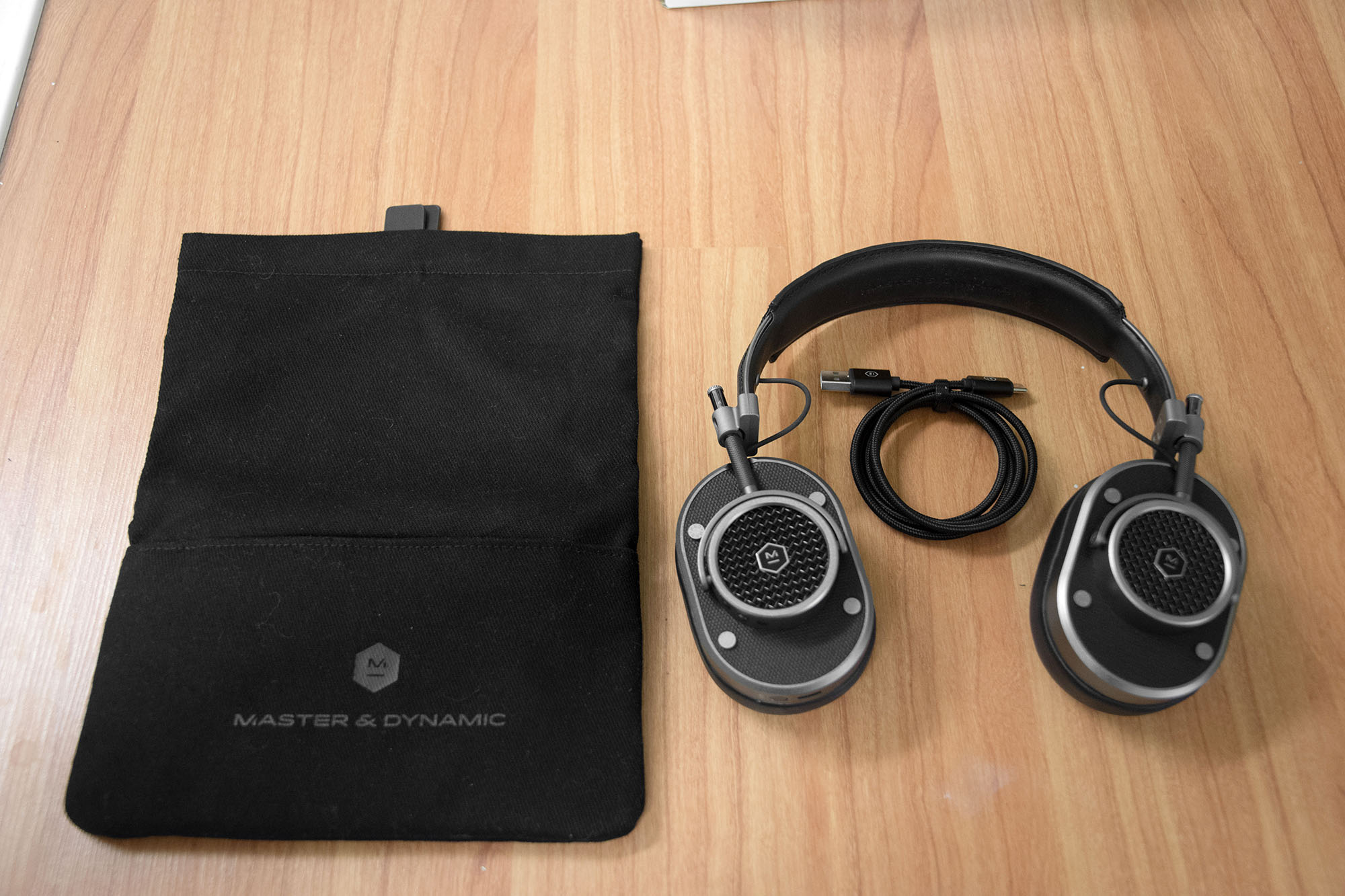 In the box you’ll find two cables and a travel pouch (with a zippered pocket for the cables). The pouch closes magnetically and the zipper pull is leather (or feels like it). The cables are nicely braided, much tighter and smoother than most braided cables, and have really nice metal ends. I only wish the USB cable was the C-to-C cable with a C-to-A adapter we saw with the MW07 series.

M&D’s classic sound signature is in full force here, although the drivers in the MH40 Wireless are not the same ones in the original MH40. The 40mm beryllium drivers are aided by Qualcomm aptX (I wish M&D would adopt aptX HD or Adaptive in the future). The highs are bright and detailed. They’re a bit sparkly, but unlike a few of their products, they’re not piercing or harsh. The lows are just a bit boosted with a warm mid-low and a good amount of bump. The bass isn’t super sharp and punchy, but it’s very warm and pleasant. The mids are flat in comparison, they don’t stand out but they sound great. The end result is tons of detail and a really fun sound signature that’s great to relax to. It’s not entirely flat or close to reference, but it’s well balanced and really versatile.

Bass heads may be disappoint that the bass isn’t as sharp as what V-MODA does. But there’s surprisingly little rumble in rock and metal which is a big benefit, and I love the warmth and smoothness. In fact, every genre you throw at these headphones sounds fantastic. Whether it’s poorly mixed metal, pop, electronic, or jazz, they nail it at every step. 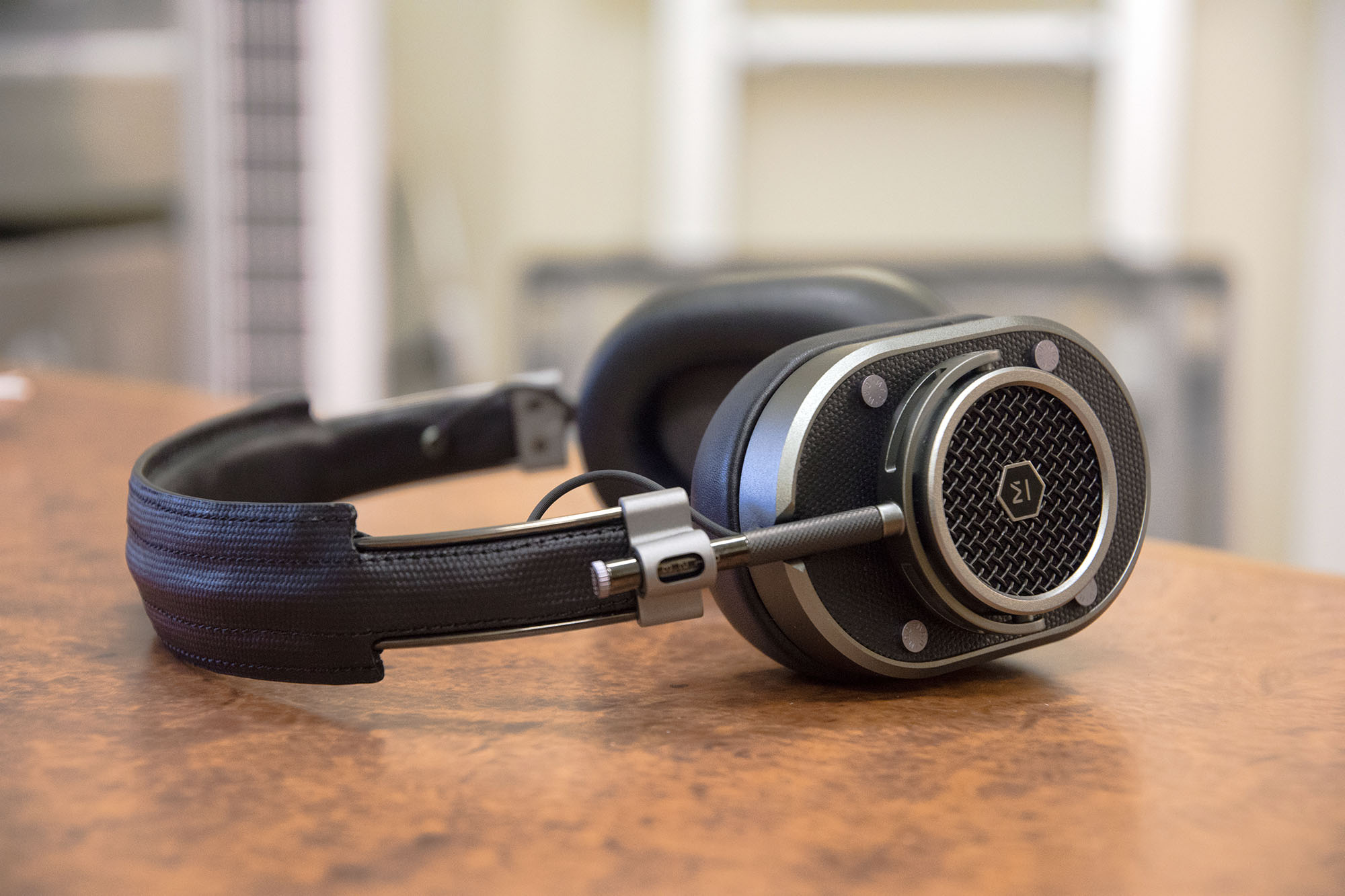 The original MH40 weight 360 grams, a bit heavy for wired headphones. Of course this was part of their incredibly solid feel, but more importantly it weighed them down on your head leading to fatigue after some time. Thanks to the 25% weight loss, the MH40 Wireless are so much more comfortable.

The lighter weight, the wide and plush headband, and the large ear cups all make for a wonderfully comfortable fit. The cups are both deep and long, fitting even bigger ears like mine with no contact of the ears to the inside of the cups. The long cup design is great because obviously ears are long, not round. My earlobes rejoice.

I’ve worn these headphones for six hours at a time with no fatigue or heat build up. They’re ridiculously comfortable, one of the most comfortable headphones I’ve ever worn. And best of all, there’s nothing for long hair to get snagged on when you take them off (I’m looking at you, Sony).

Master & Dynamic has had historically fantastic antenna design. Even with older versions of Bluetooth, they managed much longer range than Bluetooth headphones are usually known for. Walking away from your phone into another room, even two walls across, is no trouble for many of their products.

The MH40 Wireless are no different, but they step up their game with Bluetooth 5.0. The advertised range is 100 feet and I believe it. Two walls in the way is where they start to stutter a bit, but around a single room or walking down the hall, there are no cut outs or problems.

Battery life is a weak point for the MH40 Wireless. They’re advertised as having an 18 hour battery life, which is decent but not fantastic. Others at this price point are rocking 20-30 hour battery life, making 18 hours sound pretty underwhelming. Still, this is plenty of time for a flight or quite a few movies.

The issue is that they don’t ever hit this 18 hour figure. With volumes relatively high, I got about 11 hours before the low battery sound started playing. Now Android tells me there’s 20% battery left, which sounds like a usable amount, but it really isn’t.

This is because the low battery sound is very loud. It scared me a few times to the point of jumping. And it plays every 5 minutes, making wearing them with a low battery pretty unpleasant.

Thankfully they do charge very quickly via the USB-C port. Half an hour gets you half a charge and 80 minutes gets you a full charge, meaning in half an hour you can get enough juice to fly from San Francisco to New York. This eases the battery life woes but at this price point, they really should last longer. 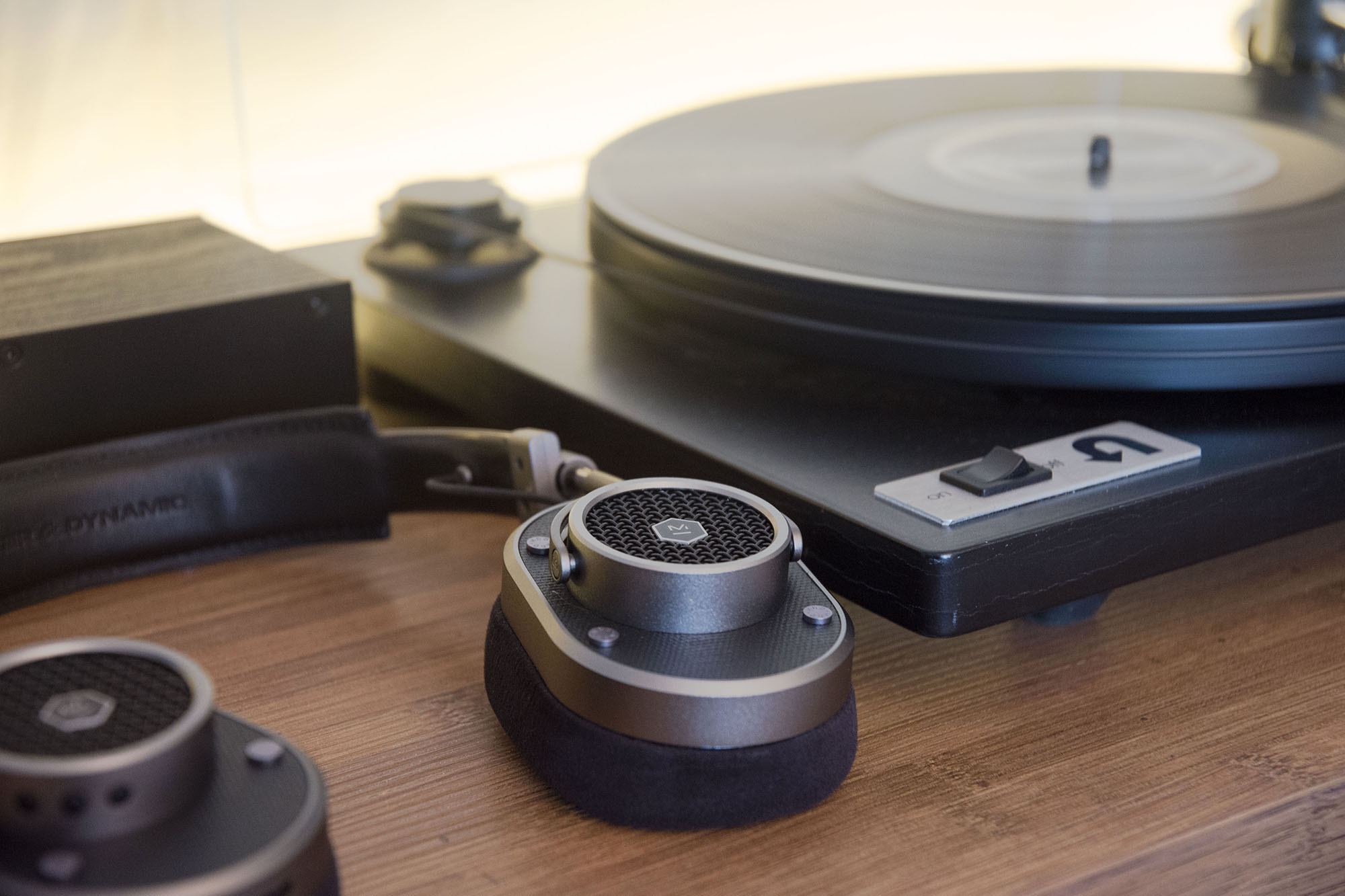 As a set of daily Bluetooth headphones, the MH40 Wireless really aren’t the best. They don’t fold, the battery doesn’t last long, and they don’t have many of the features we’ve come to expect at this price point like active noise cancelling, an ambient mode, and app controls. There are other headphones on the market better for that, but they have their own major shortcomings.

Headphones like the Sony WH-1000XM3 and Beats Studio 3 are cheaply built (the Sonys feel like creaky toys!) and don’t sound like their price tags imply. The MH40 sound incredible and are built like a tank. They should last a long long time. And when you’re wearing them and listening to music, their shortcomings melt away as the impressive sound quality and fantastic comfort creep over you. If you care at all about sound, keep the MH40 on your list as a lovely wireless set of headphones you can really enjoy. And when you’re done, you can hang them up on a stand and just drool over their beauty.

Happy 5th anniversary M&D. The MH40 Wireless is one of your more flawed products, but it may be my favorite one yet.