Replacing a laptop on a budget isn’t easy. Tablets aren’t as practical due to not having a physical keyboard, and lugging around a Bluetooth keyboard and a case with a kickstand isn’t fun. So what if a company combined the 2-in-1 concept of a laptop with an Android tablet, all at a very low price?

The RCA 11 Delta Pro did just that. It’s not a new concept, but it’s one that hasn’t been done in a while. It’s a tablet that attaches to a keyboard much like a Surface Pro (or an ASUS Transformer Pad, if anyone remembers those), but it costs only $140. So how good can such a package be for such a low price?

On the front you’ll find a display and a front facing camera. On the sides you’ll find a bunch of exposed screws and a surprisingly good set of ports. There’s the proprietary barrel charger, a micro USB port (that can also charge the device), a full size USB 3.0 port, and a microSD slot to compliment the 32GB of internal storage. There’s also a power button.

On the back is a speaker grill, a camera placed with no regard for symmetry, a status LED for charging, and a volume rocker. It’s an odd place for a volume rocker but it works. The speaker is tinny but reaches a decent volume for watching videos, no complaints here.

On the bottom are the four communication pins and two alignment slots for the detachable keyboard. 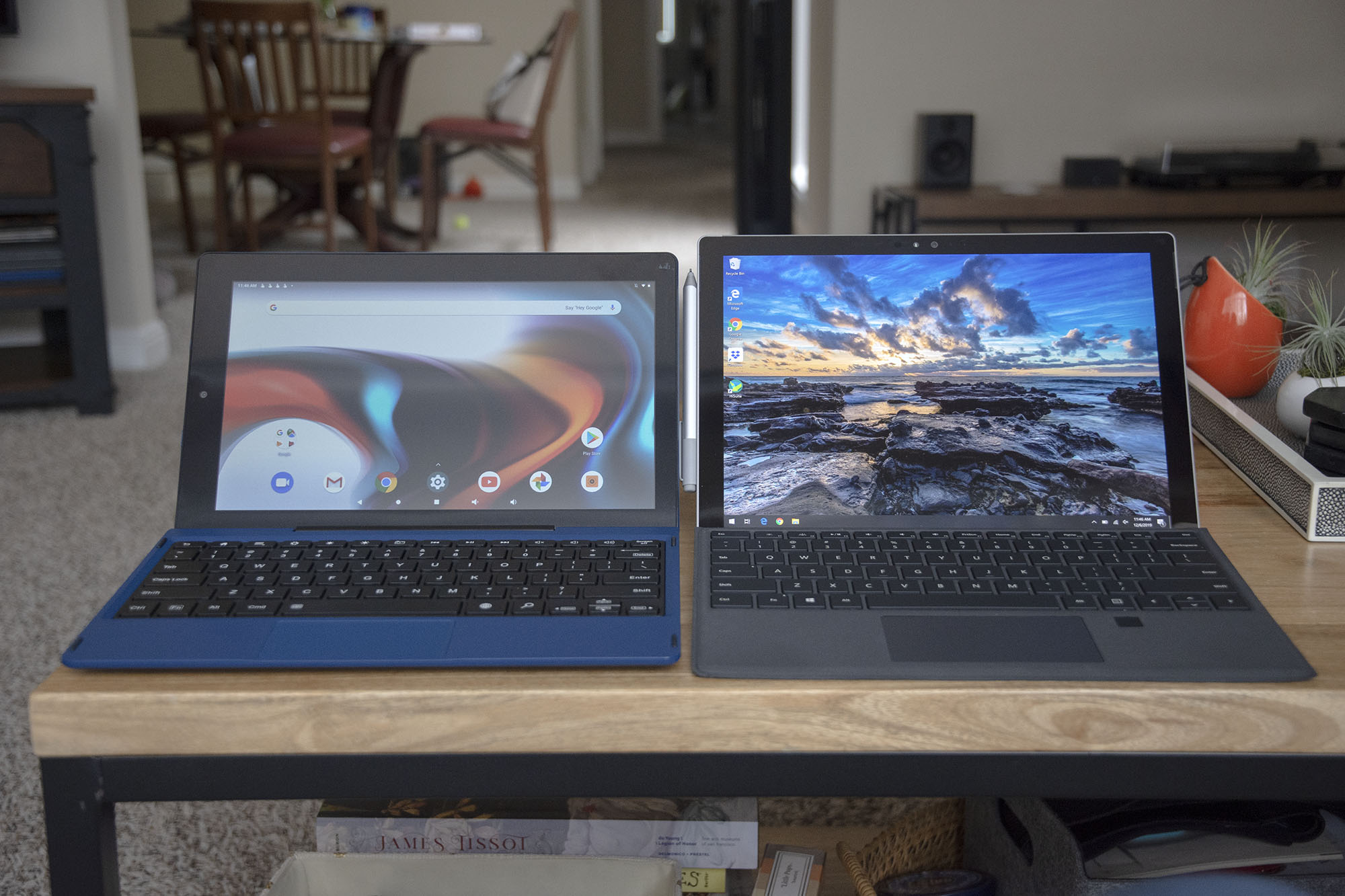 The display is an 11.6-inch 1366×768 panel surrounded by beefy bezels. On top is a layer of plastic rather than glass, and it has this odd grippy texture that’s not very pleasant or conducive to scrolling. Plastic of course scratches much easier than glass so it’s something to be wary of.

As for the panel, there’s really not much to say. The resolution is low and not very sharp, the colors are washed out and inaccurate, viewing angles are pretty bad, and the blacks are gray. There’s also some backlight bleed around the edges. However it does get shockingly bright which is great for working outdoors. And though the coating looks gloss, it has a slight glare reduction. Unfortunately, one major feature missing is auto brightness so you’ll have to adjust brightness on the fly. Not that big of a deal for a 2-in-1.

Most of the tablet and its keyboard are made from plastic. It’s thin, cheap feeling plastic and the back of the tablet flexes quite a bit (enough to create ripples on this display). All the buttons are plastic as well. Strangely enough, the bottom of the keyboard is made from metal, likely to give it some flex resistance. This worked out well because the keyboard has surprisingly little flex or give. It feels very solid.

The hinge is fairly stiff and robust and the coupling mechanism is strong magnets that hold the two pieces together pretty well. The rubber feet are adequate and opening the lid angles the keyboard upward nicely.

Nothing about this tablet feels particularly good, but it gets the job done. It just ends up feeling a little bit like a toy. 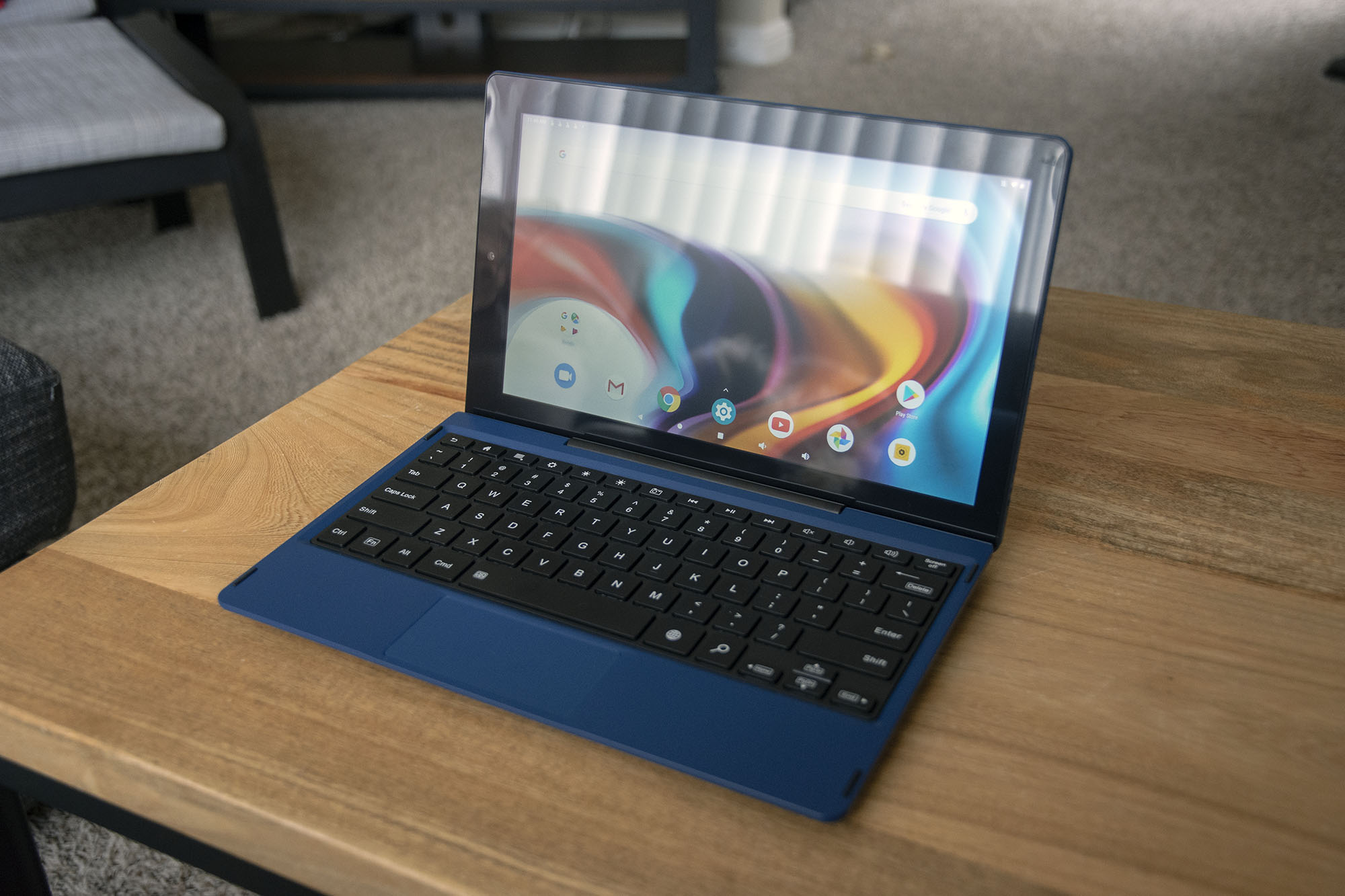 Installed on this tablet is a completely stock build of Android 9.0 Pie. This of course is awesome, because stock Android is generally better than most skins and definitely substantially lighter. On low end hardware, you want stock Android. RCA didn’t really add much to this build other than adding volume buttons to the nav bar. Otherwise the only extra app you’ll see is a user manual.

As for as Android itself, it’s come a long way for productivity, especially with a keyboard. Familiar things like Ctrl + T in Chrome will open a new tab, Alt + Tab will switch between tasks, and some apps are well optimized for the keyboard and trackpad. However, not everything is peachy.

Right click goes back in Chrome and this cannot be changed. Two finger scrolling works opposite of many computers and also can’t be changed. Scrolling with the trackpad doesn’t have an animation, just an instant transition down a few lines at a time. The arrow keys don’t work in Google Photos. And basic laptop features like closing the lid to sleep or waking the device with the keyboard don’t work.

But overall, Android is pretty usable on a 2-in-1 and with the right apps, can replace your laptop if you’re not doing anything advanced.

Performance is a huge mixed bag. You do have to remember that this tablet is only $140 including the keyboard, and the Delta Pro had some nice surprises for the price, but you’re sacrificing a lot at this price point.

With a 1.3GHz quad core and 2GB of RAM, scrolling is a bit stuttery but works quickly in web pages. Pages themselves vary, with a lot of desktop pages lagging pretty bad. Writing this review on the tablet, the text in Chrome is often a good second behind what I’m typing, two to five if I type fast. Frankly, typing in WordPress is hard to use. However with other sites like Facebook, the experience is relatively good. Watching YouTube is not a problem, even at 1080p the playback is smooth without any major slowdowns.

With 2GB of RAM, multi tasking shouldn’t be great but is usable with two apps. Switching between two apps for productivity is relatively quick and apps aren’t killed in the background unless you wait for quite a while.

Another issue, albiet a small one, is boot time. It takes absolutely forever, well over a minute.

Honestly for the price the performance is pretty good. However, it might not be good enough for many people who are used to flagship devices. For the average person, it will suffice. 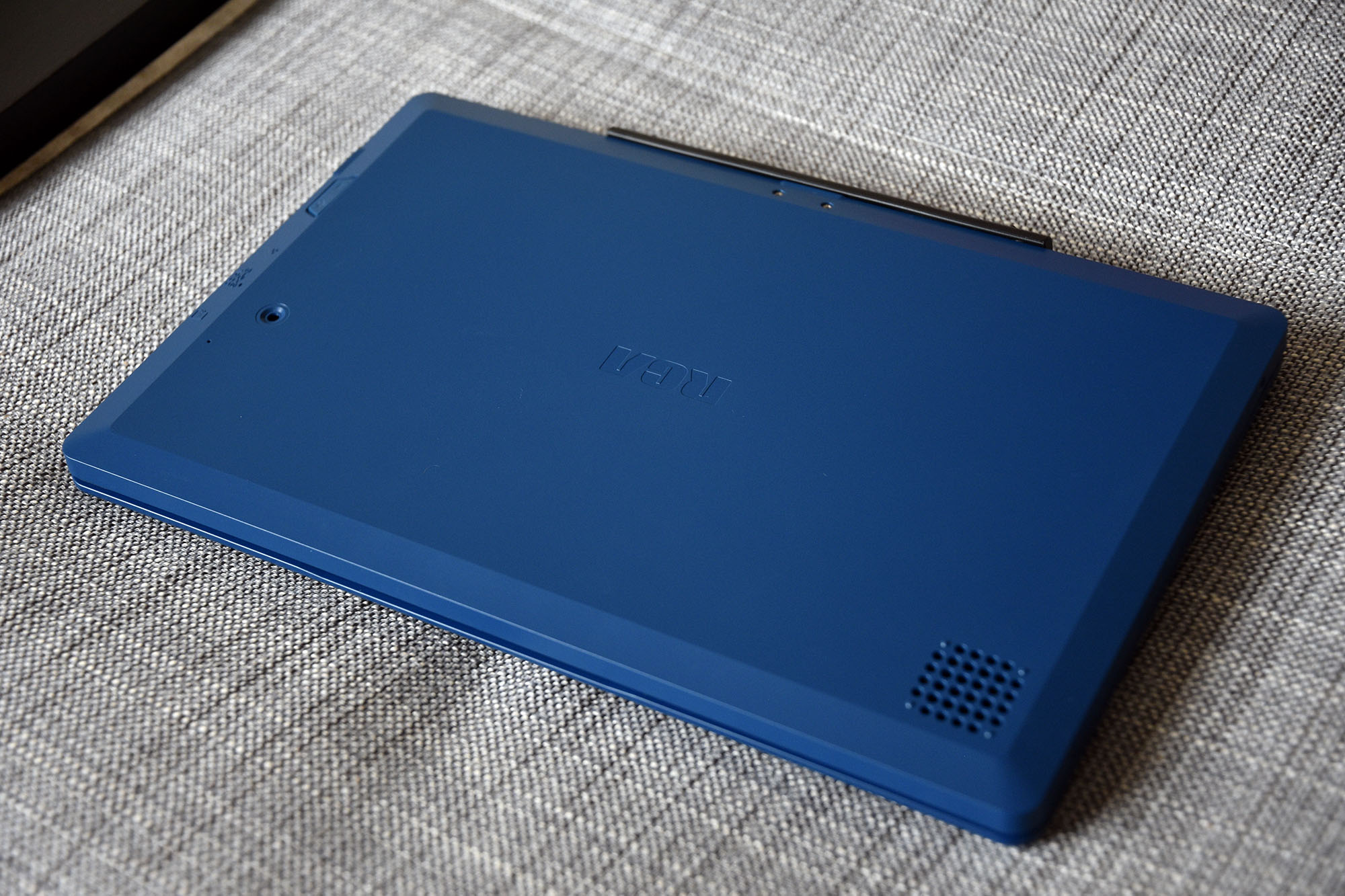 The battery life is rated at six hours on one charge. It’s not too far off from general work, like web browsing or using basic apps.

The idle drain isn’t too bad, but you may find a dead tablet in a bit over a week. This isn’t particularly unusual for Android tablets. Keep it topped up when you’re not using it.

Oddly, the device can charge over micro USB or the included proprietary barrel connector. Why the barrel connector was necessary I have no idea. The charger supplies only 7.5W of power.

The main appeal of this tablet is the included magnetic keyboard. Much like other two in ones, the tablet attaches to the keyboard with magnets and contact pins. You just drop the tablet in place and the keyboard turns on. It gets a little top heavy this way, but it won’t fall over. You can also use the keyboard as a stand and put the tablet on backwards.

The keyboard is of a good size, pretty much full size and comfortable even with big hands. The key travel is fairly long but the actuation is very low, so you have to hit the keys pretty hard to activate them. It takes some getting used to but it’s a very decent keyboard. At the top are brightness, volume, and playback controls as well as some shortcuts. I especially like the back button placement instead of the escape button, which works great. Unfortunately, there’s no keyboard backlight but it’s hard to expect this at the price.

The trackpad is very small and has a terribly stiff click to it. Fortunately it’s very sensitive and tapping works great. It’s also accurate and wide enough to easily span the entire screen.

Overall the keyboard is a solid addition and a surprising inclusion at this price point.

The RCA 11 Delta Pro is a budget 2-in-1 Android tablet, but it gets the job done. It may sound like I’ve ragged on it a lot but I think it’s important to understand its shortcomings and downsides before buying. Nonetheless, it’s a surprisingly good value for the price and even outside the price it works very well.

So if you (or your grandma) need a budget laptop replacement, this tablet should be on your list. It’s much cheaper than a Windows laptop and a lot more simple. And harder to screw up, in the case of your grandma. All your favorite apps are there on the Play Store so it’s a pretty complete experience. And hey, it looks pretty nice too!