Samsung missed the mark with the Note 10

This week Samsung unveiled the Galaxy Note 10 and Note 10+, ending the simple yearly decision-making process for Note fans. Now at first glance, it may still seem pretty obvious, the Note 10+ is clearly the torchbearer for the Note line that has typically (and sometimes catastrophically) pushed the boundaries with its specs. However, the nearly half an inch of screen size bump from the previous generation is really the one stand out spec for the Note 10+ this time around and after going hands-on with the devices there is a real question as to whether the Note 10+ has finally crossed over into “too big” territory.

Now that would be fine as the standard Note 10 features a just slightly smaller than the last-gen 6.3-inch screen, but it has some tradeoffs to go with its more manageable size. Samsung seems to have created a Goldielocks problem for itself with the expanded Note line but left out the “just right” option.

We’ll take a look at the giant first and don’t get me wrong, it’s a well-built device and has largely competitive specs across the board, I’m sure that most longtime Galaxy Note fans will be perfectly happy with this option.

With that said this Galaxy Note just doesn’t really stand out on a hardware level with the exception of the screen size and that feels like a dubious claim to fame. There are plenty of devices that are close with the One Plus 7 Pro and Galaxy S10 5G just short of it at 6.7-inches and the Oppo Reno 10x Zoom at 6.6-inches and then a whole slew of devices in that 6.3-6.5-inch range. Now if there’s anything the Note line can claim to have taught us it’s that extra screen real estate can be a great thing, but there has to be a point of diminishing returns and it feels like we’ve crossed that line. 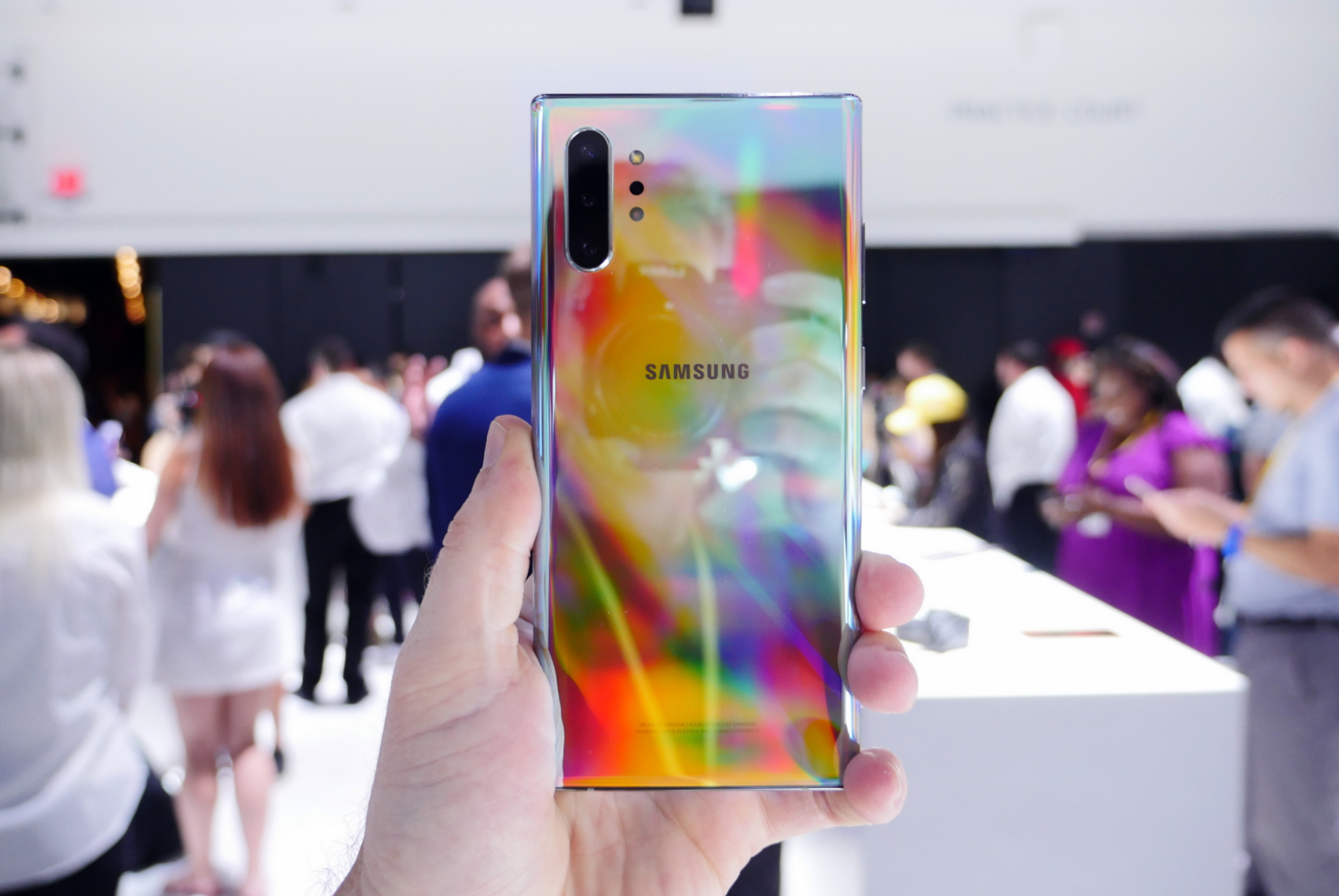 To be clear the actual dimensions of the Galaxy Note 10+ are virtually identical to the Note 9, thanks to the improved screen to body ratio, but this would have been a great moment to reduce the device size slightly. A 6.8-inch screen simply doesn’t bring anything to the table that couldn’t have just as easily been done with a slightly smaller and more pocket-friendly and user-friendly device. Furthermore, the Galaxy Note 10+ saw the sacrifice of a number of features despite its gargantuan size like the headphone jack, the fingerprint reader and the Bixby button (pause for weeping).

Returning to the specs there’s nothing really attention-grabbing here, the quad-camera setup looks fine, but with the exception of the time-of-flight (ToF) camera to enable some depth of field trickery it’s a carbon copy of what the S10+ delivered almost 6 months ago and still behind options like the Huawei P30 Pro or Oppo Reno 10x Zoom in terms of actual groundbreaking camera tech. There are some clever touches like the zoom microphone feature in video and Live Focus which can blur the background in video, but these don’t feel like headline features to run out and grab a device.

One notable addition is support for 45W fast charging and 15W wireless fast charging, but again this isn’t anything new with Oppo already supporting 50W charging in some of its high-end smartphones and you get the slower 25W charger designed for the standard Note 10 in the box, so it’ll be an extra purchase to enjoy those speeds. At 4,300 mAh the battery life on the Note 10+ is likely to remain among the best but with a device this size that’s to be expected.

Taken as a whole the Galaxy Note 10+ checks a lot of boxes, but with the exception of the S Pen it’s hard to see how it sets itself apart from the competition including the Galaxy S10+ which delivers a pretty comparable experience for $300 less given the now regular deals available.

Moving on to the now positively tiny (kidding) Galaxy Note 10, Samsung appears to be addressing the market segment that always wanted to give the S Pen a shot, but didn’t want to go with an enormous smartphone. Of course at 6.3-inches this phone would have been thought of as gigantic itself up until about 2-years ago, but now even the Galaxy S10+ eclipses this mark at 6.4-inches. 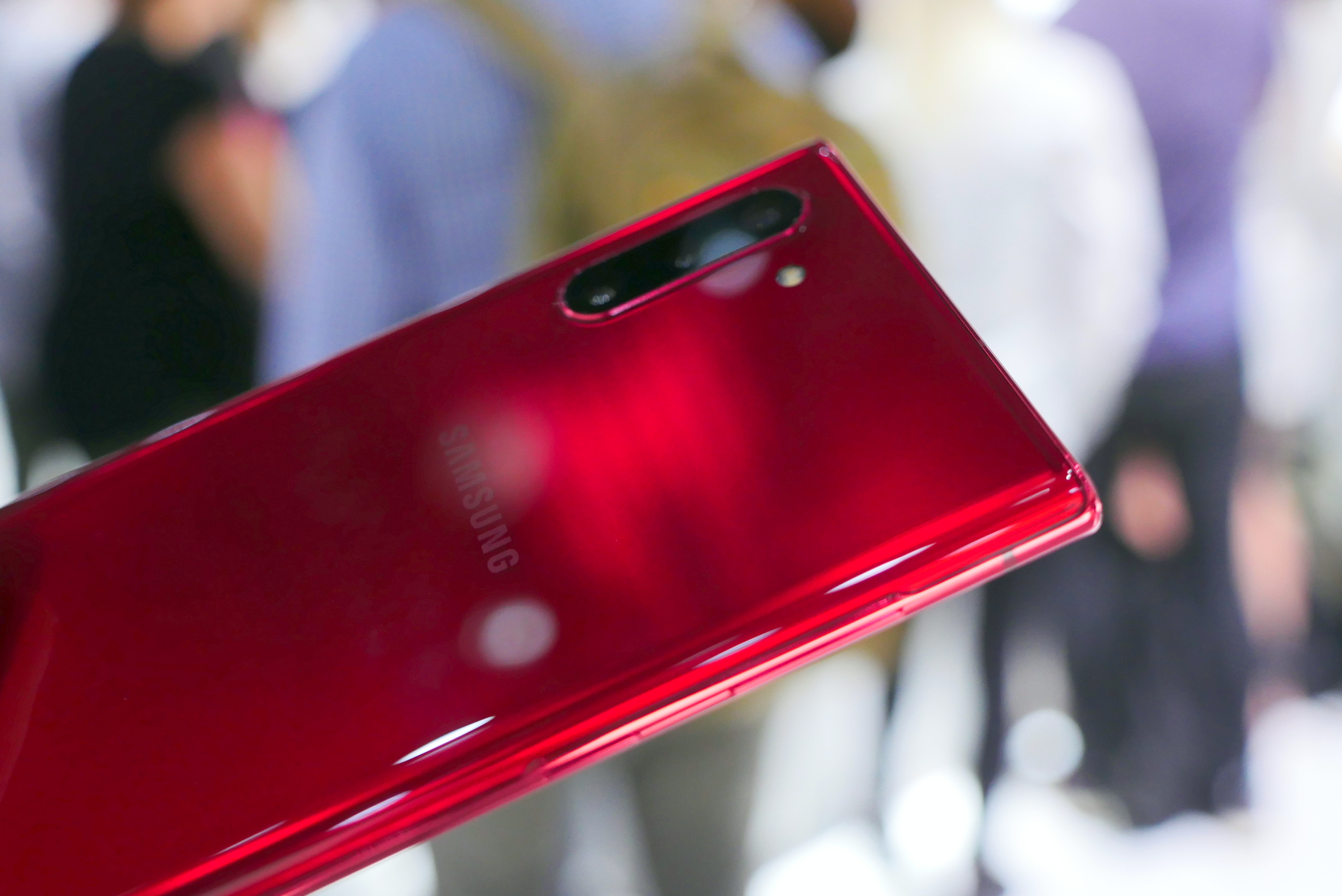 Beyond just shrinking the screen down to 6.3-inches the resolution drops to 2280×1080 (FHD+) from the 3040×1440 (QHD+). This isn’t probably going to be a big deal to most people, but at these screen sizes, it will be noticeable to some. On the positive side, the screen quality should still be excellent with support for HDR10+ and the reduction in pixels should help battery life on the smaller Note which only has a 3,500 mAh battery, 800 mAh less than its larger sibling and 500 mAh less than the more comparably sized S10+.

Pushing fewer pixels will also help cover the reduction in RAM on the Note 10, it goes from the fairly impressive 12GB in the Note 10+ to the same 8GB found in most of the S10 variants. Again this is likely crucial for the battery life on the Note 10 and shouldn’t be a noticeable performance hit.

There’s also sad news on the charging front as the Note 10 is limited to 25W charging, which on the other hand will save you from having to purchase a 45W charger like the Note 10+ buyers. You can also save any money you were thinking of spending on a microSD card, the Note 10 loses that as well.

While the Note 10+ added the ToF camera to the rear array from the S10+, the Note 10 drops that and really does just deliver the same triple array that we saw on the Galaxy S10. Now to be clear it’s a perfectly adequate setup, but it’s behind even the current competition with the next round of devices already on the horizon.

Even more so than the Note 10+, it’s hard to see how anyone other than a diehard S Pen fanatic (yes, I do realize that is a thing) would go for this device. Now there are huge launch incentives through Samsung and I have no doubt it will be discounted by $200 by the holidays, but I can’t imagine recommending anyone pay full retail for this device.

So what would have been the right blend for the Note 10 to impress me? Honestly, the Note 10+ isn’t that far off, I have my quibbles that I outlined already, but it’s not a bad device by any means.

I would have liked to see a 6.5-inch screen and the overall reduction in size that could have offered. A true telephoto option like that seen in the P30 Pro or the Reno 10x Zoom, I know not everyone sees the value in that, but having spent a couple of months with the latter device now it remains transformative for general mobile photography to me.

Oh and include the fast charger in the box, let people actually experience the tech you built into the phone.