Commander One review: A swiss army knife for file management

As much as Apple loves to try to sell its customers on the glory of owning nothing but Apple hardware, there’s a solid portion of its user base that relies on Apple laptops or desktops but would never dream of giving up our Android smartphones. As you might have guessed, I fall firmly into this category and so when given the opportunity to review Commander One from Eltima, I was intrigued. While my smartphone is certainly vastly more independent from my laptop than it was 10 or even 5 years ago, there are still times when I need to pass data between the two or would like to access the data on my smartphone without having to pass the data through the cloud and unsurprisingly macOS doesn’t really play well with others.

To be clear this isn’t all that Commander One does, while we are going to primarily focus on the Android-related functionality, this is a Finder replacement for macOS that delivers a dual-pane multi-tab file manager that is sorely lacking on the Mac these days and that is still just scratching the surface of what you can do with Commander One. So let’s dive in and take a look at whether Commander One might be the right solution for you.

I’m going to get this out of the way right at the top as I know there are people that simply aren’t willing to pay more than $5 (or anything for that matter) for an app, so no reason to keep you on the hook until the end. While there is a free version of Commander One that gives you a dual pane file manager interface on your Mac, in order to use it with your Android device (along with a host of other features) you need to upgrade to the Pro Pack after a 15-day free trial for a one-time purchase of $29.99. If you are a small business you can shave a little off this price with a 5-pack for $99.99 ($20 per license) or up to 50 for just $149.99 ($3 per license) if you are outfitting a larger company. You can add support for lifetime upgrades to any of these purchases for $14.99, $49.99, and $75 respectively. You are better off purchasing the app directly through Eltima as you lose a few unique features with the Mac App Store version thanks to Apple’s sandboxing, check out the full comparison here.

While $30 isn’t cheap, I appreciate utility software like this not shifting to a subscription model, if you view it as the same as 3 months of a music or video streaming service it seems pretty reasonable.

We’ll cover some of the extras as well, but our primary concern is how Commander One works with your Android device(s) and the core functionality of file management.

Getting started with the app is basically just plug-and-play, the one thing you will likely need to do when you connect your smartphone is to change the preferred behavior when connecting your smartphone via USB. It is probably by default set to simply charge, so once you have connected your smartphone to your laptop go into Settings > Connected Devices > USB and then select File Transfer. This was honestly the one issue I really found with Commander One and that is that I had to redo this every time I connected, it’s obviously just a couple taps, but it would be vastly preferable to simply be able to plug in and go. 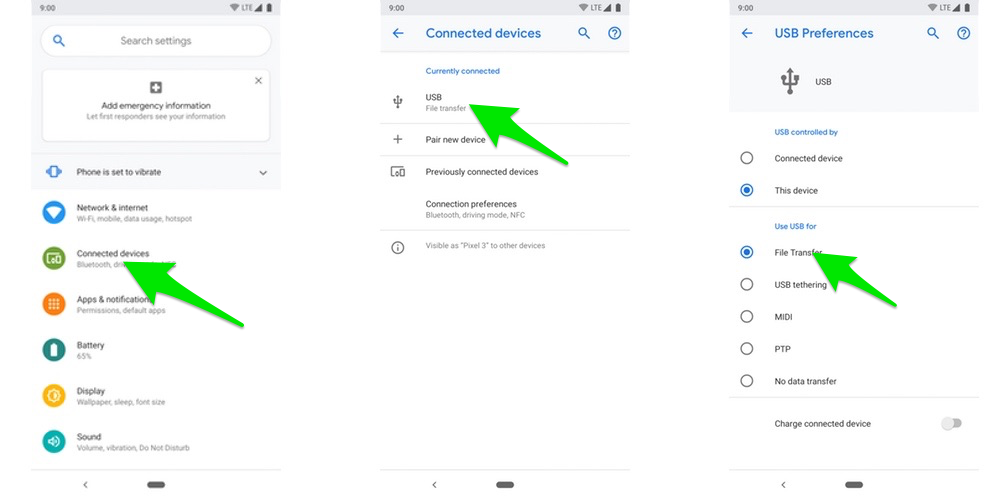 On the laptop side when you connect your smartphone for the first time you will be prompted with a message that “MTP device ‘(your smartphone’s name)’ is connected to Commander One”, just check that you don’t want to see this again and click ok. 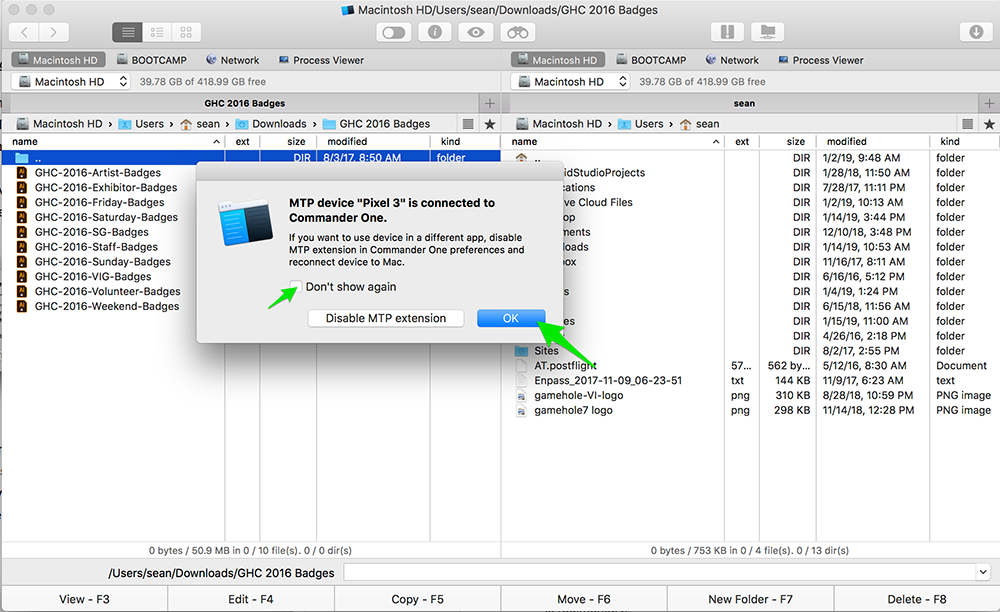 That’s it, you’re all set to start transferring files. The basic functionality here is pretty much what you would expect, you have a pane on the left and a pane on the right and with the Pro Pack you have a wide variety of options which you can display here, including of course your Android device. Unfortunately due to the limitations of MTP you won’t get image previews in the icon setting, which would be considerably more convenient, but this isn’t a fault of Commander One. Each pane can also display multiple tabs, so you can quickly switch between connections. Transferring files is as simple as dragging and dropping between the panes. 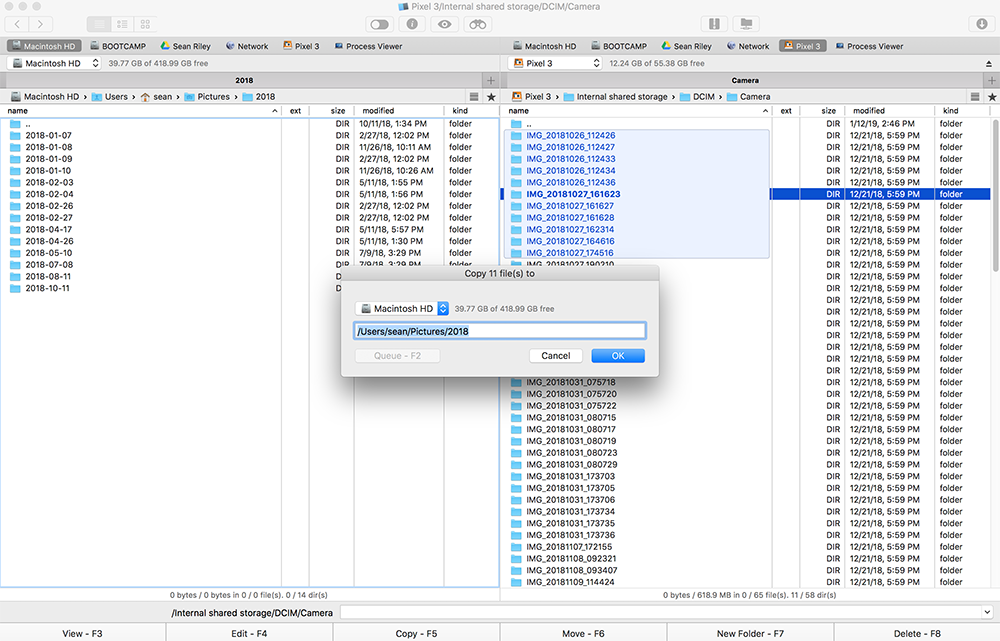 For the most part, the file system on your Android smartphone is pretty intuitive and for most people not too cluttered so you likely don’t have a labyrinth of folders to dig through when looking for something, but if you can’t find anything there or if more likely something is being particularly troublesome to locate in one of your cloud drives or your laptop then you can utilize the robust search functionality in Commander One to track down that errant file. You can search for text within the files with options to narrow it down to the entire word, case sensitive searches and even RegEx searches for the more programming inclined among you. 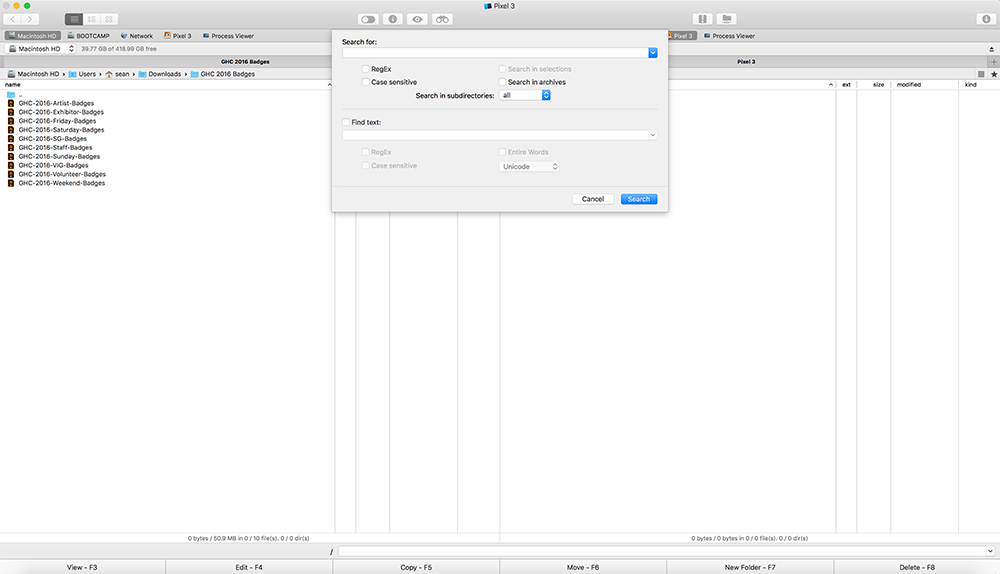 Moving on to the rest of the functionality offered by Commander One, again we aren’t trying to be completely comprehensive here, but we’ll cover a few highlights and if you have any questions that you would like to see addressed please sound off in the comments and we’ll be happy to answer.

For those of you that use an FTP client for any reason, Commander One can tackle this job and save you an extra app on your Mac and with the added bonus of being able to connect up to basically any other location that you have files stored including local drives, network drives, WebDAV servers, Amazon S3, Google Drive, Dropbox and Microsoft OneDrive. Again this is a big strength for Commander One, it can be the one app you use to organize your files across pretty much any and all storage you have regardless of whether it is local or networked. 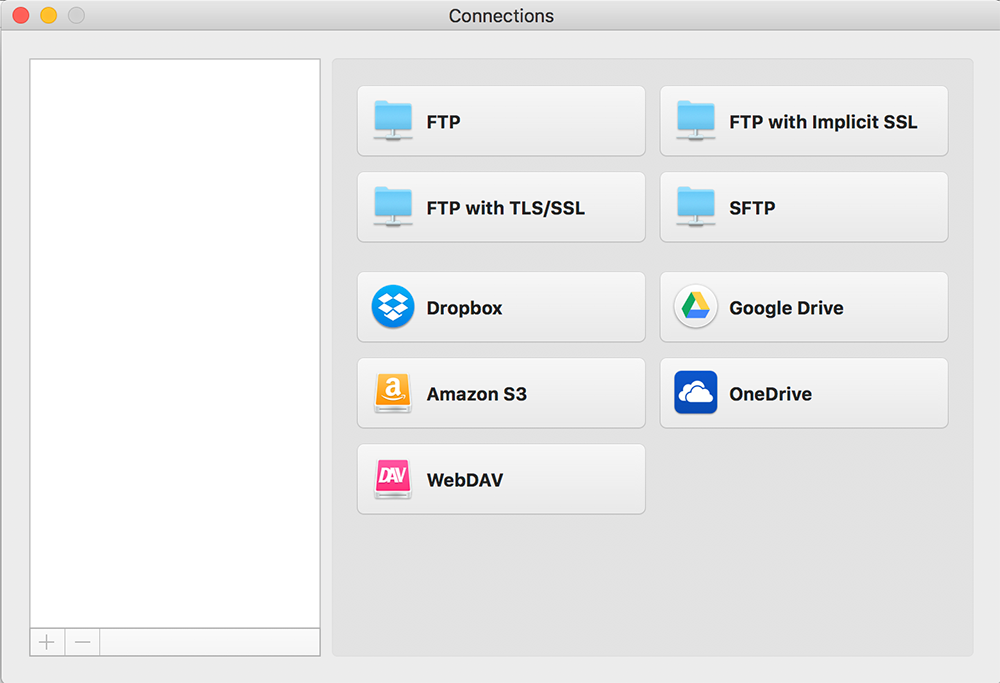 Commander One is also an excellent tool for file compression and extraction with support for ZIP, RAR, TarGz, and 7zip. Again this can replace another app that you may have sitting on your laptop that only sees occasional use.

As we covered at the outset, the $29.99 price point is probably going to scare some potential users off and honestly if you are going to use this solely as an Android file transfer app once every couple months then you probably aren’t going to get enough value out of it to justify the cost. Android File Transfer, while far from perfect, is free and will get the job done for the occasional transfer.

However, viewing the full utility of Commander One it is a well designed swiss army knife of a file management app that will not only replace a number of standalone apps on your Mac, but also supercharges the lacking native file management experience on the Mac. To me, that does sound like something that is worth the $30 one-time price of admission.