Earlier today we saw a leaked promo image of the Moto E5, and now we’re getting a taste of another Motorola device with the Moto X5. The Moto X4 was a return for the company to the “Moto X” branding, after taking a couple of years off, but the device did not hold the same level of excitement as the older Moto X devices.

Instead, Motorola and Lenovo opted to create a device that could not be personalized, was super glossy, and was one of the first devices to be released in the US with Android One. With this latest leak of the Moto X5 (via Droid Life), it seems that Motorola will be sticking to a similar design, with more than a few big changes. 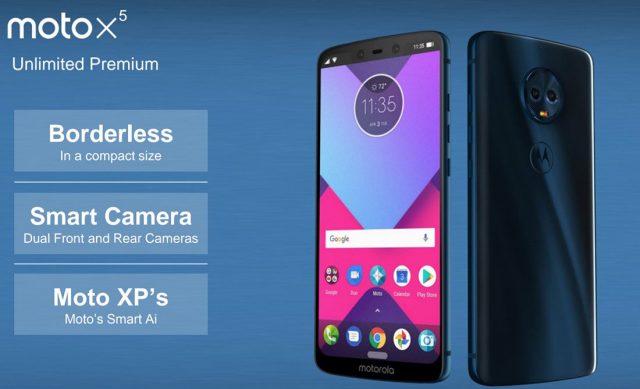 Most notably, the display of the Moto X5 has been expanded and is likely to measure in around 5.9-inches and carry an 18:9 aspect ratio. This means thinner bezels around the entire front, as well as the need to move the fingerprint scanner.

The other odd thing here is that the shared image of the Moto X5 reveals that the device could have a notch extremely similar to that of the iPhone X. Looking at the top you see the earpiece, which is flanked by dual cameras. When looking even closer at the top right and left edges, you can see the network signal placed to the left and time/battery placed to the right.

This is similar to what Apple has done with its status bar on the iPhone X, but implementation on Android would have to be much different. This is because of the fact that Android users can see all of the notifications that have been missed. But if this notch is implemented, that would obviously become a thing of the past for Moto X5 owners.

Moving to the bottom of the device, you can see that there is no longer a fingerprint scanner/home button mounted on the front. It seems that Motorola is ready to nix the home button altogether and provide users with only software navigation capabilities.

When it comes to other specs, there isn’t anything else shared, so we aren’t exactly sure whether the Moto X5 will become a flagship of sorts. Additionally, it’s super early for these devices to be leaked, so take this one with a grain of salt.

In the meantime, sound off in the comments and let us know what you think about the Moto X5 and if you like the new design.