When it comes to super-cheap, but reliable, smartphones there aren’t that many options on the market. Motorola is likely one of the first OEM’s to come to mind thanks to its “Moto E” lineup of devices.

It seems that we are nearing the launch of a new entrance in the Moto E lineup, after an image of the Moto E5 was leaked. However, the interesting addition to this device is the included fingerprint scanner. 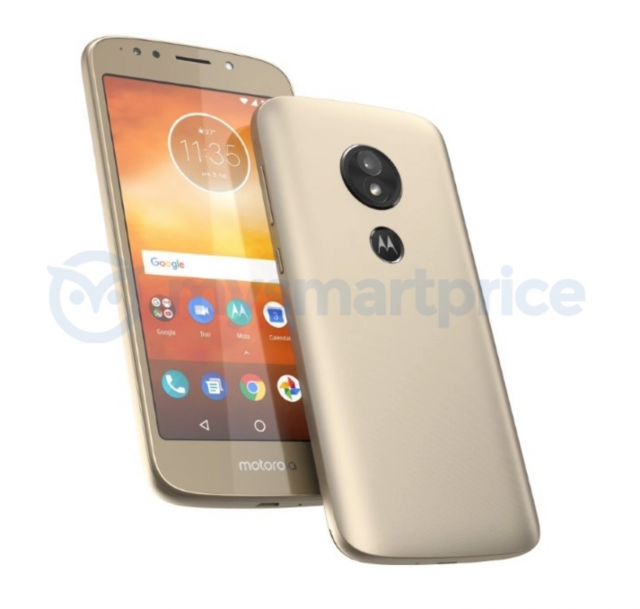 The image shows off the gold variant of the Moto E5, revealing that the device will feature a slight redesign, starting with a rounded camera module. Of course, we have seen similar modules used on devices such as the Moto X4 and others, but this is a first for the Moto E lineup.

Another first is the inclusion of a rear-mounted fingerprint scanner, a move from the front-mounted option found on older variants. Unfortunately, it seems that Motorola opted to not do anything about slimming down the bezels as the Moto E5 will still include a rather large forehead and chin.

Another interesting thing with this image is that the Motorola logo will be placed on the inside of the fingerprint scanner dimple. This is likely to keep Moto fans happy that love seeing the iconic “M” on the rear of its devices.

Unfortunately, we don’t know much about the Moto E5 on the spec front other than the fact that it’s likely to feature a microUSB charger. This is a rather disappointing move, but one that’s expected for a device that is priced at less than $150.

Finally, MySmartPrice claims that the Moto E5 will launch on April 3rd thanks to the date being found on the leaked images’ device clock. Considering that the Moto E4 was launched in June last year, a move to April would be a bit earlier than expected, but Motorola usually does not keep close to schedule for releasing devices.

Let us know what you think about the Moto E5 and if you would be interested in picking up this device, provided it is still priced below $150.