Perhaps the most exciting option to join the ranks is the LG G6, which was LG’s flagship for the better part of 2017, until the LG V30 was announced, and then released. Pricing for these devices starts at $149.99 for the LG X Charge, which is nestled in the mid-range market with its 5.5-inch display MediaTek MT6750 SoC and 2GB of RAM. 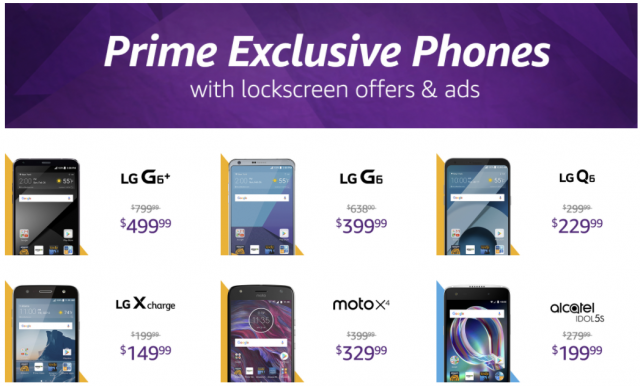 Moving up the list, the LG Q6 is priced at $229.99, while the LG G6 is priced at $399.99 and the LG G6 Plus is priced at $499.99. The reason for the higher pricing being offered for the Plus variant is thanks to Hi-Fi Quad DAC, along with 128GB of expandable storage, compared to the lack of a Hi-Fi DAC and only 32GB of onboard storage for the standard LG G6.

As with every other Prime Exclusive device offered by Amazon, there’s a slight catch that you’ll have to deal with if you want to jump on these deals. Every time you unlock your device, you’ll be greeted with various curated offers and ads before you are actually able to interact with your device.

This may be worth it to some if you’re looking to save some duckets, as the LG G6 Plus is regularly priced at $695 without ads, or just $499.99 with ads. Nonetheless, if you can put up with the ads, you can get some really great deals and that is evidenced by the other offerings in the Prime Exclusive lineup.

Finally, you can hit the button below to pre-order up one of these devices, however, they won’t be shipping to owners until November 9th, so you’ll have to wait a couple of weeks before it arrives. Let us know if you plan to pick up a new LG device from the Prime Exclusive lineup!