Even after its original launch, Konami’s espionage action hit still has the power to impress like few other games of its era. In fact, Metal Gear Solid 2 is such an amazing technical showcase, even to this day, many modern titles have yet to catch up to the standards its hugely interactive environments, delicious detailing and exacting AI behavior laid down.

To celebrate Metal Gear Solid 2’s launch on SHIELD TV, here are several of the technical treats that wowed gamers worldwide when the masterful stealth adventure first hit shelves. All of these moments make the game worth experiencing on SHIELD TV today.

Now this is how you create dynamic, realistic rain. Back in the early 2000s, rain in videogames was usually represented as a series of falling jaggy lines that resembled shoddy TV static. Not Metal Gear Solid 2, though. Oh no. You may be dealing with virtual precipitation, but the swirling storms that enrapture the game’s now iconic tanker are legendary.

The rain in Metal Gear Solid 2 is its own vicious, untamable entity. It lashes down onto Snake’s shoulders; it cascades off the ship’s walkways; it even changes direction depending on the wind. The game’s opening storm is an incredibly evocative moodsetter, immediately escalating the action to new heights as you struggle to see enemy guards through the dramatic downpour. Even years after its release, Metal Gear Solid 2 may well have some of the best video game rain ever to fall from a digital sky.

Solid Snake’s sneak ‘em up has a ludicrously meticulous eye for the small details, even by 2017 standards – let alone compared to the games of 2001. Take the lounge in the opening tanker chapter. Not only do the dozens of booze bottles behind the bar all crack when you shoot them with that ultra precise M9 tranq gun, they even sport multiple break points; shooting the neck of a bottle will cause it to shatter in a different manner than firing at its base.

You can spot similarly stellar, tiny technical touches with an ice bucket near the bar’s sink. Said frosty cubes can all be individually shot, and if you leave them on the worktop for long enough, they’ll eventually melt. Metal Gear Solid 2 was so ahead of the curve with this sort of detailing, it’s absurd.

Another lovely technical touch that shows Metal Gear Solid 2’s graphics weren’t just ahead of their time, so was its incredible sound design. Sneak up to the tanker’s canteen, and you’ll find a series of pots hanging in a small kitchen area. Choose to scratch Snake’s itchy trigger finger and fire upon these utensils from right to left, and you’re rewarded with an ace, ascending musical scale. The Metal Gear series has always been stuffed with these sorts of playful little details that constantly encourage players to interact and experiment with their environment. 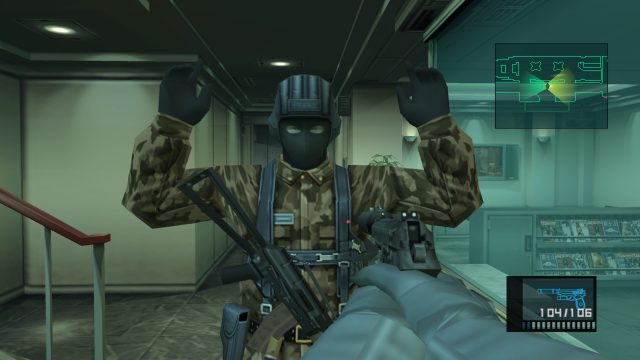 Metal Gear Solid 2’s guns are really something else. Painstakingly researched and modelled in exacting fashion, they’re a hell of a lot of fun to fire… even if you really should be going about your stealthy business in firearm-free fashion. Indeed, Snake and Raiden’s arsenal is so technically detailed, every bullet you unleash spews out a shell casing, which ricochets off the ground every time your sneaky operatives decide to go ‘loud’.

When you eventually start amassing a heavy-hitting armory deep into the Big Shell chapter, Raiden can pepper the walkways of the offshore oil facility with hundreds of bullet casings if you really go to town on guards with the likes of the rapid-fire M4 and AKS-74U assault rifles. No wonder Snake’s sequel wowed the world when it first hit.

Like almost every aspect of Metal Gear Solid 2, the game’s physics were right at the forefront of cutting edge tech. Long before Havok was commonplace, Snake’s stealthy adventure sported numerous cool physics moments; be it shooting the supports of a tarp to make it flutter away in the wind during the opening boss fight or somersaulting down stairs and seeing Snake crash in a crumpled heap.

Bumping off enemies in specific ways also shows off the game’s advanced, limb-smashing physics. One of the game’s coolest kills involves a guard in one of the tanker’s large engine rooms. As Snake enters this whirring, dingy part of the ship, he stumbles upon an enemy yawning while standing perilously close to a third floor rail. Boot him off the balcony with Snake’s roundhouse kick at just the right time, and he will crash over the rail, not only falling to his doom, but crushing a coworker three decks below.

Almost every area in Metal Gear Solid 2 begs to be prodded at and played with. The late fight in the dark, damp hallways of the tanker chapter is a great example of the game’s meticulous level design. Guards will shoot out the lights above Snake to make it more difficult to hit them in the gloom, while they frequently hurl grenades to stop you from cowering behind a conveniently placed crate. Luckily, you can also turn the environment against them.

Fire at the pipes running along the walls of this claustrophobic corridor, and you can blind and fatally burn your enemies with boiling bursts of steam. Boasting such finely crafted fidelity in its level design shows what a peerless technical powerhouse Metal Gear Solid 2 really was. 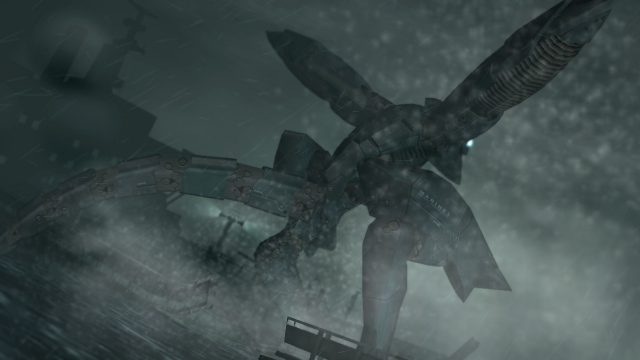 Metal Gear has never been a series to do things by halves. Gigantic, nuclear equipped robot dinosaurs. Dozens of hours of dialogue. The most thick and lustrous mullet in all of games. Konami’s espionage adventures have always dreamed big, and Metal Gear Solid 2 is no exception. When most games could barely handle half a dozen characters at once, Snake’s PS2 debut was forcing its skulking hero to creep past a hundred onscreen marines.

The end of the tanker chapter challenges you to sneak through a huge hull full of hardened soldiers, showcasing a level of technical spectacle few other games of the era could come close to. All these years later, the sight of that mass of virtual humanity still impresses.

The AI routines Metal Gear Solid 2’s guards deploy are nothing short of incredible. The tightly focused, sharply trained hunting patterns enemies utilize to track down Snake and Raiden are so technically impressive, few modern games have ever managed to match them, let alone top these advanced techniques. When a troop of guards enters Evasion mode after an alarm is raised, you better stay still and hidden, because these virtual soldiers are seriously committed customers.

Guards who pat each other on the shoulder to let their pals know they’re providing cover; the way enemies cautiously open locker doors; those ruthlessly in sync movements. All these exacting procedures were informed by the detailed drills Metal Gear Solid 2’s military advisor Motosada Mori use to perform for the game’s development team in Konami’s Tokyo offices. Clearly, the devs were listening closely, because Metal Gear Solid 2’s technically proficient guards are still among the most ruthless hunters in all of games.

For the first time ever on Android, Konami’s seminal stealth sequel, Metal Gear Solid 2: Sons of Liberty, is available to download. Get it now on Google Play exclusively for NVIDIA’s Tegra X1-powered entertainment platform, SHIELD TV.