HTC U11 Battery Life Review: It’s great and blows the Galaxy S8 out of the water

Battery life is an extremely important metric when dealing with today’s mobile devices. For a lot of people it’s one of the most important deciding factors when upgrading to a new phone. Every year manufacturers promise better battery life thanks to new new advancements in Android software optimizations or more efficient processors, but it doesn’t always amount to much in real world use.

The HTC U11 comes equipped with a modest 3,000mAh battery which is on par with other major flagships devices like the Samsung Galaxy S8, LG G6, and Samsung Galaxy Note 5. I’ve been spending the better part of the last few weeks with the HTC U11, enough that I can accurately predict the kind of battery life I — and hopefully you — can expect from the device. Here’s what I found. 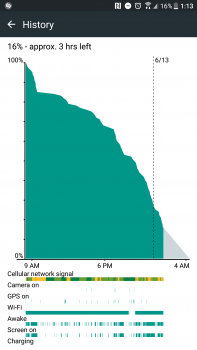 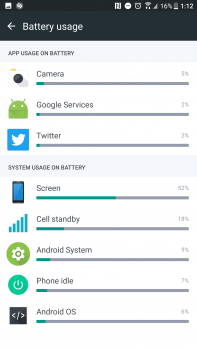 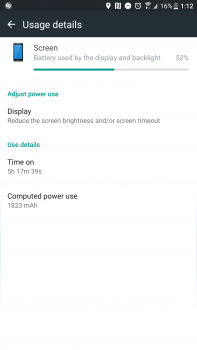 First off, I should start by reminding everyone that battery life will never be the same for any two people. Even when dealing with the same devices, there are simply too many variables at play. Whether it’s apps installed, cellular signal, or services running in the background — all I can do is compare the battery life I’ve been receiving with other devices I’ve used as my daily driver.

When it came to the HTC U11, on a normal day’s usage I was averaging 5+ hours of screen on time with relative ease. This absolutely mops the floor with the Galaxy S8 and G6, two devices which struggled to hit 3-4 hours on a good day, even less if you really pushed them. This is the first time since the Moto G5 Plus (which uses the more battery friendly Snapdragon 625 processor) that a 3,000mAh battery performed better than I was expecting. By all standards, the HTC U11 felt like a 3,500mAh – 4,000mAh device. It’s just that good. 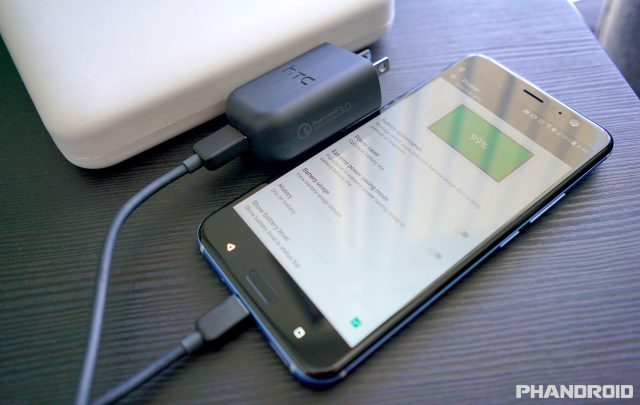 Another high point of the HTC U11’s battery was its fast charging technology. The HTC U11 utilizes Qualcomm’s Quick Charge 3.0 to minimize downtime when it finally comes time to charge the device. I have to admit, with the HTC U11 using the Snapdragon 835 processor, I was a tad bit disappointed to find the phone wasn’t using the latest version of Qualcomm’s Quick Charge tech (Quick Charge 4.1) but perhaps there were some issues getting it to work properly and more importantly, safely.

In either case, Quick Charge 3.0 is leaps and bounds better than the Adaptive Fast Charging you find on the Galaxy S8. For one, you can actually use the phone while enjoying the faster charging (in order for the Galaxy S8 to fast charge, the screen has to remain off) and it’s just faster all around, delivering 50% battery in only 30 minutes of charging. Here’s the full charge times:

Because of the way Quick Charge works, it’s about the same amount of time to fully charge the HTC U11 to 100% as with the Galaxy S8 (about 1hr 30 min), you just get the bulk of your charging done a lot faster. That means if you don’t have time to waste, the HTC U11 will get you a higher percentage with the least amount of downtime. 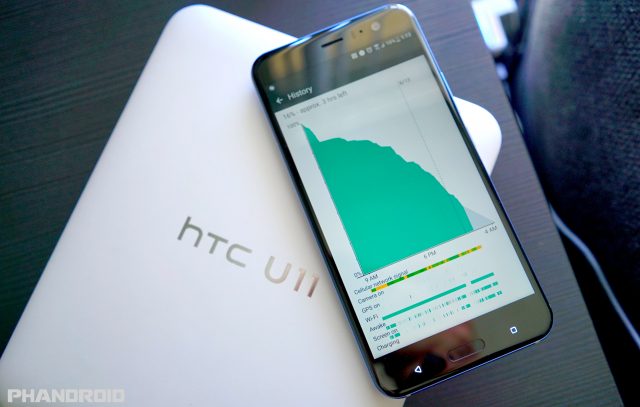 So, what did we learn today? Well, not all devices are created equal. Even when we’re talking about the same exact battery capacity, Android version, and processor — battery life can vary wildly between two devices. While it’d be easy to assume that perhaps the slower performing device would provide the best battery life — the Galaxy S8 in this case — the HTC U11 not only smokes the competition in raw speed, but battery life too. Crazy, huh?

Battery life is a pretty damn important spec and if you were worried about the HTC U11 not performing as well as other devices, don’t be. We’d love to hear your thoughts. Any HTC U11 owners out there that would like to report their battery life results?