Delve into a Mesmerizing Underwater Adventure in ABZÛ for Android

Now available to stream on NVIDIA SHIELD via GeForce NOW, ABZÛ is a gorgeous new adventure game set beneath the waves, and it’s unlike any game you’ve experienced. Featuring art direction from Matt Nava, one of the minds behind the desert-set wonders of 2012’s beguiling Journey, that shouldn’t be a total surprise.

According to Nasa, we still have better maps of Mars and the moon than we do of the ocean floor. Plus, oceans actually represent 99 percent of the living space on Earth, says the Oceanic Institute of Hawaii’s Pacific University – put the two together and you realize almost the entire globe is an enigma. What better place to set a fantastically unusual, truly immersive adventure?

In ABZÛ you discover the secrets hidden beneath the waves as you explore everything from vast stretches of open water to cramped and claustrophobic caves. Unlike space, this is no blue-black wasteland: life here is colorful, diverse and formidably rampant.

Key to the whole thing, though, is the life that’s gone. The increasingly complex and impressive ruins of a lost civilization litter the seabed, and your overarching purpose is to figure out who the builders of this Atlantis were, and what happened to them.

Playing as a nameless diver with a graceful way of swimming that includes rolls, powerful kicks and the speed to leap clear out of the water – to the potential delight of the dolphins – you find as much to explore in the aquatic life as the strange ruins. 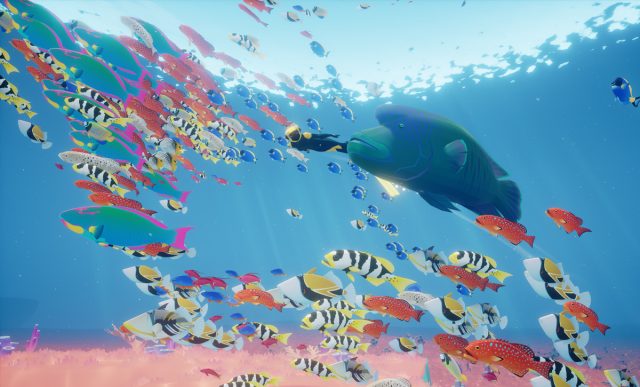 ABZÛ recreates entire ecosystems, ranging from forests of waving kelp and living reefs of coral to animals so large the camera is forced to slip back just to fit it all in. You encounter everything from shoals of thousands of small, brightly-colored fish to manta rays, killer whales and giant squid. The sandy floors teem with lobsters, crabs and shellfish. There are predators and there is prey. Fish get eaten and are themselves taken by larger, meaner forms.

Yet you’re not armed, and there is in fact no combat. You watch, explore and – with occasional success – attempt to interact, or at least get a response from the life around you. It’s random, procedurally generated rather than scripted to happen a certain way, so it’s different each time you play through. 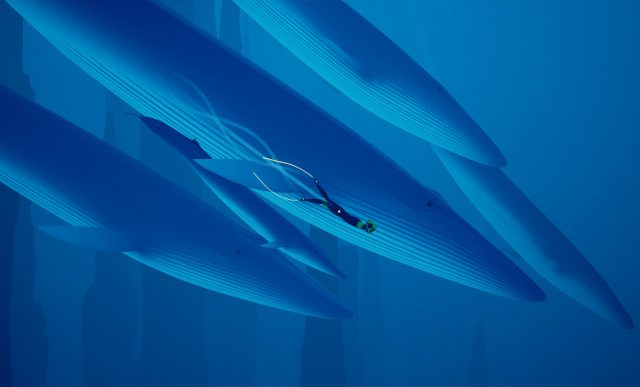 ABZÛ doesn’t have a user interface, so there is zero information overlaid on the screen. It doesn’t have a health bar or an air meter, there’s no disembodied taskmaster yapping in your ear, and there are no missions. It’s just a gorgeous, uninterrupted screen full of mysterious wonders, and all the more elegant, serene and relaxing for it.

Where ABZÛ does change is in the abyss. The deeper you go the darker it gets, the thinner life gets and the moodier the soundscape becomes. Austin Wintory’s orchestral score constantly morphs to reflect your environment, sinking from rolling orchestral waves to sparser, darker ambiance as you yourself sink deeper. It’s as fundamental as the visuals in creating the extraordinary undersea world of ABZÛ.

ABZÛ is now available for a special 20% off launch price of $15.59. If you purchase the game on GeForce NOW you will automatically receive an additional key to download the game on PC at no extra cost.

This article was written by Steven Williams