Whether you’re a new or one-week veteran Pokemon Go player, there are tons of questions the game leaves unanswered. Because the game explains so little, most people only know the basics that comes by actually playing the game, even if they’re left to guess what some of the gameplay mechanics actually mean. For instance, Nearby.

Now, we know it shows you, well, Pokemon who are in your general nearby vicinity represented by the amount of footprints being displayed. 3 means it’s far off, 2 means you’re getting warmer, 1 means it’s close, and none means you’re already on top of it. But if you’ve ever wondered what the exact distance these footprints translate to, someone was actually able to find out. 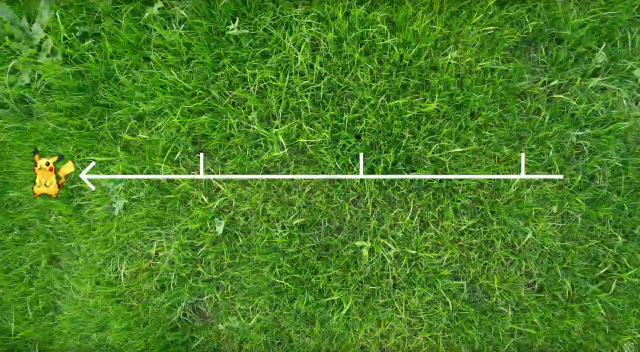 The newly hatched Trainer Tips YouTube channel actually went through the process of calculating the exact distance of the footprints, which should help you in figuring out how far Nearby Pokemon are located. Basically, the performed several test using spawned Pokemon, then measured the distance as they walked away. After taking the average, here’s what they found:

Of course, 0 footprints means the Pokemon is less than 130ft away and will spawn almost immediately. So, while these calculations can be helpful if you’re really hell bent on tracking down a Pokemon in Nearby, there’s still the problem of figuring out the general direction you should be headed. This is something you’ll only be able to figure by watching where the Pokemon is showing up in the Nearby list and going in the direction where it starts moving up in the list. Good luck out there!