Samsung has another “first” to go under their belt. The company today announced that they’ve developed the world’s first removable UFS card. UFS stands for Universal File Storage, a standard which provides read and write speeds that are extremely higher than what we enjoy in the world of microSD cards.

Samsung’s cards have a read speed of 530MB/s and write speeds of 170MB/s, which is about 5 and 2 times faster than current technology, respectively. They also range in size from 32GB to 256GB, so you won’t have to sacrifice speed for increased storage like we so often have to. 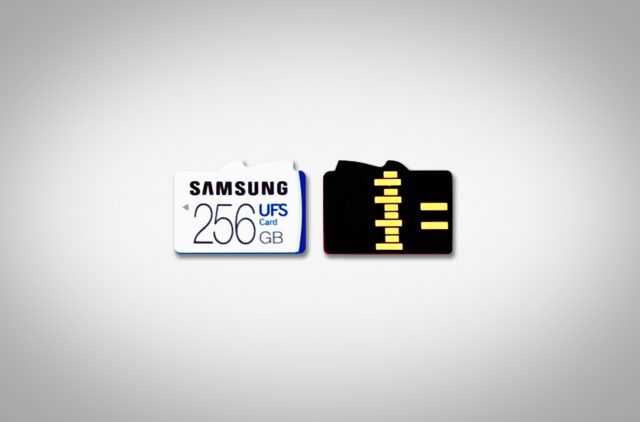 Why do we need that much speed? With the advent of 4K video recording and the potential to record content in even higher resolutions down the line, it’ll be important for memory sticks to have the bandwidth needed to ensure a smooth video recording experience. We have that now with most phones, so this feels more like future proofing than anything else. Faster storage can also lead to better load times for files of all types, and if Samsung ever allows us to make use of Adoptable Storage in Android Marshmallow or higher it’ll also allow games and apps to launch faster.

The next question is when, exactly, we can use these cards, and with which devices. Samsung’s usage of embedded UFS 2.0 storage in their 2016 smartphones is pretty niche already, and we’d imagine it’ll be even harder to get removable UFS cards off the ground without making products to support the cards. Will the Samsung Galaxy Note 7 be the first? We’re not sure.

Even with Samsung’s history of continued innovation, the company has to consider the current market. People aren’t likely to ditch microSD cards right away, especially if they are considerably cheaper than these new UFS cards (pricing hasn’t been mentioned yet). And considering that these UFS cards’ contact surfaces are very different compared to the microSD layout, we aren’t sure they can include one port to handle both card types.

But we aren’t Samsung, and we have no idea what their plans for these things are. Therefore, we’re going to sit back and wait for more information from the horse’s mouth.