Last week, Instagram introduced a whole new “look” for their app which included a simple, grey-scale UI and incredibly loud pink icon for your home screen. We were less than enthused about the changes and the internet reacted in a similar manner. The icon at least was compared to everything from a washer machine to something a kid could have created in a few minutes using the gradient editor in Photoshop. While the way the app looks is something we can get adjust to, how it behaves is an entirely different story.

We’ve known since back in March that Instagram was planning on rolling out a new non-chronological “algorithmic” feed for its users. This more Facebook-like News Feed — which was said to roll out in the coming months — would show users posts from the people they care about most first, photos and videos that may have otherwise been buried under countless not-so-important photos of celebrity detox teas and #fitspo posts.

This caused an uproar among Instagram “celebrities,” eventually snowballing into a full blown panic begging followers to “turn on notifications” in order to keep their posts in view (rumor had it, the changes would go into effect the following day and the internet freaked out). Instagram would later post that “nothing with your feed is changing right now,” promising to notify everyone once changes began to roll out more broadly.

These screenshots were taken as I scrolled down my feed

It seems a more broad rollout has begun, but oddly enough Instagram hasn’t notified anyone. In fact, after hitting New Zealand, Finland, Ireland, the Netherlands, Singapore and Venezuela early last month, it appears Instagram’s new algorithmic feed is already making its way stateside. We’ve been receiving reports of readers in the US that have suddenly noticed posts now out of order in their feed — something we’ve recently begun seeing on our own devices.

Here’s how it works: since, apparently, I tend to like a lot of dog posts on Instagram, their new algorithm is now floating all of them to the top of my feed. While it was actually nice to find a photo from 11 hours ago that my aunt had posted, it’s not like Twitter’s “While you were away” section or even their “Best Tweets” feature (which is opt-in, by the way). Everything in your feed is out of order, even posts mere minutes apart. Instagram is no longer a timeline of posts in chronological order, it’s a feed of posts seemingly shuffled without rhyme or reason (although we’re sure Instagram knows the formula).

I admit, I like the idea of Instagram’s AI figuring out which posts to show me first, especially if I’ve been away from the app for awhile. Since I follow over a thousand people on Instagram, sometimes posts from actual friends and family do get lost in the mix. I just assumed (or hoped, rather) there would also be an opt-out setting, something to easily switch back to a chronological feed be it a toggle or whatever. You know, like how it is on the Facebook app. After diving into the settings, we found no such toggle, no way to turn it off the new algorithmic feed — it looks like you’re stuck with it. And that sucks.

Still, we’re curious how many of you are now seeing posts in non-chronological order. Let’s take a quick poll and if you are are seeing the new algorithmic feed, let us know what country you’re in by dropping a comment. 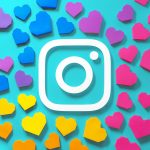