HTC 10 is officially announced, available in May for $699 [VIDEO] 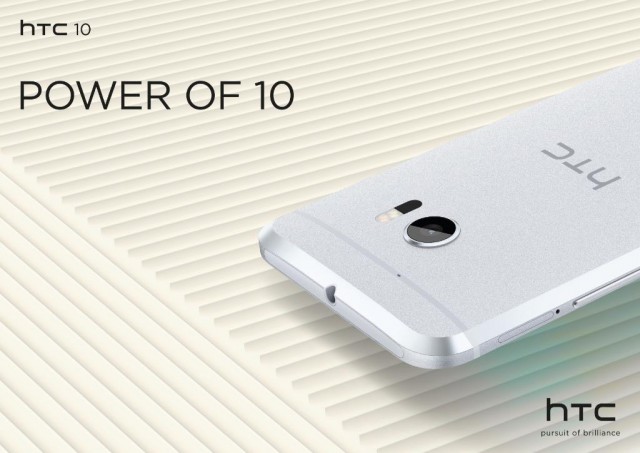 But if you can’t watch the video, let’s just jump right into all the details you care about. It’s all metal, with chamfered edges to create a more comfortable grip. It looks great, and HTC certainly has reason to be proud of this engineering effort.

Beauty is only skin deep, though, and the HTC 10 has plenty under the hood to make us take notice. Of note are the device’s 2 cameras: one 12MP sensor on the rear, one 5MP sensor on the front.

That’s your ordinary setup on paper, but HTC has introduced the first ever phone to deliver optical image stabilization on the front and rear. What’s more is both sensors also shoot at a wide aperture of f/1.8 to capture more light and create better lowlight photos. The rear camera gets the added benefit of laser-assisted autofocus and dual-tone LED flash. For video, we’re getting 4K HD.

Next up: BoomSound. No, it’s not just a software equalizer: this is the stereo speaker setup you’ve come to expect, only done in a different way. The speaker above the display — which is normally used for calls — will amplify high-frequency sounds, while the bottom-placed traditional speakers amplifies those on the lower end. What you get is a rich stereo sound, with each speaker having its own amplifier to create rich sound.

Of course, all the other usual stuff is there too, with 24-bit hi-res audio and personalized sound profiles to deliver the type of stuff your ears love to hear. And to show off just how nice the audio is, HTC has even gone ahead and included a high-end pair of headphones inside the box to ensure you have a nice set of cans to take advantage of it all.

We should also take a moment to talk about the software here. It’s HTC Sense 8 on top of Android 6.0 Marshamllow, with HTC’s continued focus being on a clean, bloat-free and smooth experience.

They’ve done something new this time around, though: Freestyle UI. It’s a home screen that you can customize exactly the way you want with free-form movement of icons and widgets, custom stickers that can launch your favorite apps, and more. You can go as far as layering an icon on top of another. All of this is coupled with an updated theme engine to help you make your device fit your style.

Other new software features include App Lock, which lets you lock apps behind authentication such as a PIN or the newly-included fingerprint scanner, and an app manager that gives you easy control over all your apps and lets you know when an app is overstepping its boundaries and affecting areas of performance and battery life.

HTC has revealed that pre-sales for the HTC 10 will begin today for $699, though the device won’t be available until some point in May. T-Mobile, Sprint and Verizon Wireless will all offer the device. As for AT&T customers, you’ll have to buy an unlocked device directly from HTC, though it’s a model that works on all of T-Mobile and AT&T’s LTE bands. You can pre-order that model directly from HTC right here.