Nexus 6P vs Galaxy Note 5 vs iPhone 6s Plus [CHART] 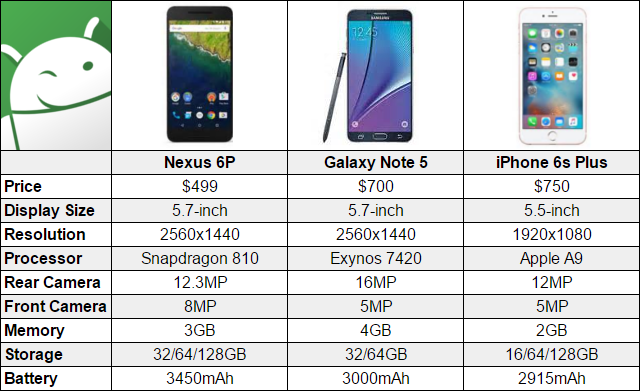 Finally, the new Nexus phones are here. First-time Nexus-make Huawei has given us the Nexus 6P, a follow-up to last years Nexus 6 phablet. If you’re a fan of big phones (which a lot of people seem to be), there are a few great options available. We always like to compare the new devices with the latest and greatest. For the Nexus 6P that means the Samsung Galaxy Note 5 and iPhone 6s Plus.

The most polarizing thing about the Nexus 6P might be the design. On the back of the device is a horizontal black bar. It houses the camera and flash, but other than that it seems to be purely aesthetic. Some people love it, others think it looks like a grocery store price scanner. The Note 5 and iPhone 6s Plus have been almost universally praised for their design. All three come in a range of colors to suit your taste.

Obviously, a big part of a big phone is the display. All three of these devices rock displays that near the 6-inch mark. The 6P and Note 5 have the biggest displays and highest resolution. Huawei and Samsung have opted for AMOLED, while Apple uses LCD. This means the Nexus and Note will have more vibrant colors and darker blacks.

It’s hard to compare cameras based on purely megapixel numbers. The Note 5 has the most megapixels, but Apple’s camera is equally as good with less megapixels. Google talked a lot about how the Nexus 6P does a great job with indoor photos. Everyone loves to boast about camera performance, but until we can test it for ourselves it’s hard to say who wins. However, we’d be surprised if the Nexus 6P camera isn’t great.

Perhaps the biggest difference between these three devices is price. The Nexus 6P undercuts the competition by over $200. That’s a lot of phone for a significantly lower price. You miss out on little things like wireless charging, but you still get top of the line features like a fingerprint scanner, fast charging, Type-C port, and a big battery.

Every time we do these charts it seems like the competition is closer and closer. Phones these days are all basically good. Even camera performance, which traditionally was not a strong point of Android phones, has been much improved. The Nexus 6P is a great phone for the price, but are you willing to give Huawei a chance? Or will you stick with manufacturers you know? 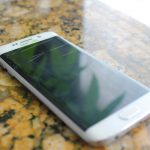